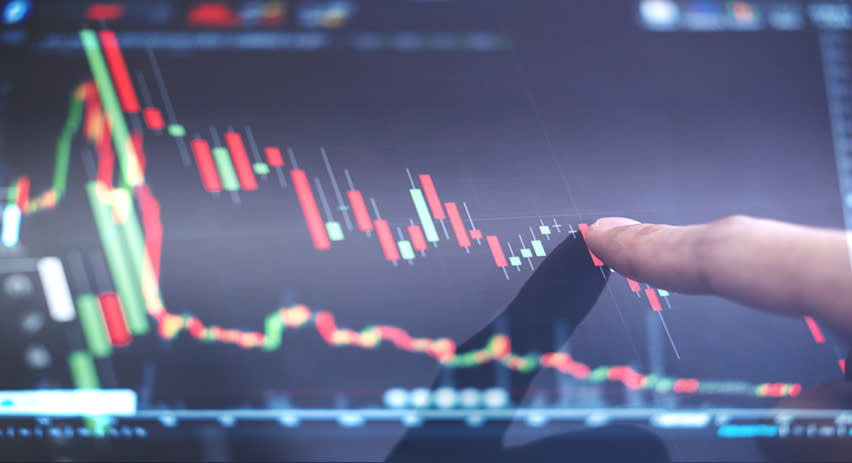 Going into the second half of the year, the market sentiment is growing clearer. First, there is a sense that the 1H collapse may be bottoming out – or at least falling to a plateau and a pause before further drops. Second, there is a growing consensus that a recession is in the offing, on a one-year time frame or possibly less. A minority opinion holds that a true downturn is already on us; but we won’t know for certain until the Q2 growth numbers are released later this month.

What does this mean for investors? In the view of MKM Partners’ chief economist Michael Darda, the gloomy sentiment may have some upside. Darda sees it as an indicator that hard times are already getting baked into current conditions – he estimates that current prices are already two-thirds of the way to taking a recession into account.

Putting his view into advice for investors, Darda says, “Our point here is that markets have already priced in a significant risk of recession/earnings declines and there may not be a recession this year. Even if there is a recession, markets move first and investors are highly unlikely to be able to time the bottom.”

With this in mind, we used TipRanks database to pinpoint 3 stocks that are too cheap to ignore. Essentially, we looked for 1) stocks with a ‘Strong Buy’ analyst consensus; 2) solid upside potential (i.e. over 30%). And on top of this, each one of these stocks is trading at low valuations. Let’s take a closer look.

First up is Capri Holdings, a fashion holding and retail company with a multinational reach. Capri has over 1,200 retail locations, including both stand-along stores and in-store boutiques. The company carries and sells a wide range of high-end branded items, including apparel, shoes, and accessories, under the well-known names of Versace, Jimmy Choo, and Michael Kors.

Capri has shown strong sales growth in recent months, and in the company’s financial report for Q4 of fiscal year 202 – the quarter ending on April 2 – it showed a top line result of $1.49 billion. This was up about 24% year-over-year, and per management was a company record. Gross margins also hit a company record, at 64.1%. Capri’s adjusted net income for the quarter was $152 million, or a $1.02 in diluted EPS. This was more than 2.5x higher than the year-ago result.

At the end of fiscal 2022, Capri held more than $1.09 billion in inventory, an increase of almost 49% year-over-year, and in-line with the company’s stated goals of both holding more core inventory on a regular basis and receiving seasonal inventory earlier in the cycle.

Despite all of this, Capri’s share price has been falling. The stock has lost approximately 34% so far this year.

These steep losses have left the luxury retailer with a relatively low share price, and put it in a position that drew the attention of 5-star analyst Robert Drbul.

In his note for Guggenheim, Drbul wrote, “While the company is facing numerous near-term macro and global headwinds, we continue to see an opportunity for CPRI for generate $7 billion in revenue and a 20% operating margin over the long term. Trading at just 7.1x our new FY23 EPS estimate, we believe CPRI offers one of the cheapest and most attractive ways to invest in the ongoing (but nonlinear) reopening of the global economy with an expectation for higher demand of occasion-based categories of handbags, footwear and apparel for social events, travel and return to office.”

Drbul follows up these comments with a Buy rating and a $90 price target on the stock, showing his confidence in an upside of 109% this year. (To watch Drbul’s track record, click here)

This is hardly the only upbeat take on Capri from Wall Street, as is clear from the breakdown in the stock’s 14 recent analyst reviews. These include 12 Buys against just 2 Holds, for a Strong Buy consensus rating. The shares are selling for $43.04; with an average price target of $73.21, they have a 70% for the year ahead. (See CPRI stock forecast on TipRanks) 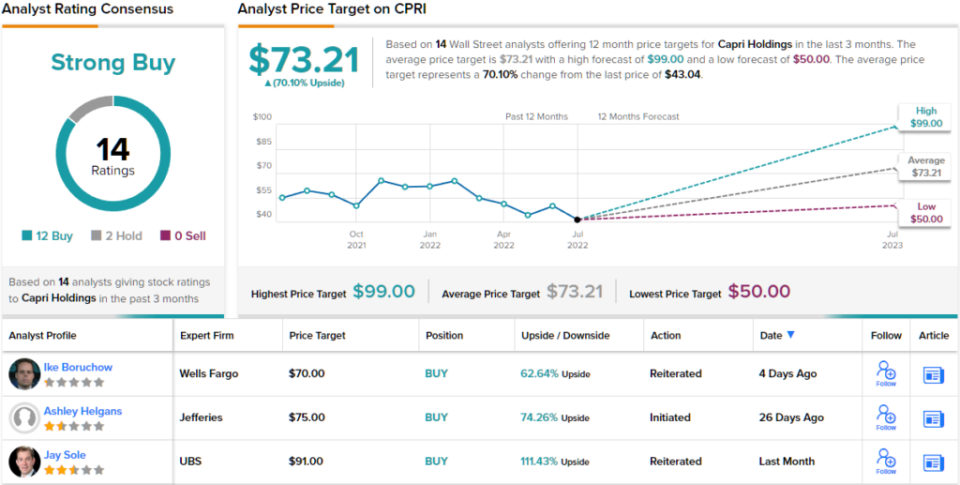 With the second stock on our list, we’ll shift gears into the transportation sector. ArcBest is another holding company, but this time in the transportation industry; its subsidiaries are trucking firms, working in the less-than-truckload (LTL) segment, a vital part of the shipping business. LTL companies move freight loads that are too big for parcel shipping but not big enough to completely fill a semi-trailer, and they move them on the full range of routes, from long-haul interstate to urban last-mile.

A quick look at some numbers tells us just how important the niche ArcBest fills. The company has over 80,000 active freight carriers, 14,000 employees, and brought in more than $4 billion in revenue in 2021. Of that, the company invested some $150 million into tech and innovation, especially focused on strategic projects.

It all set ArcBest up for a solid start to 2022, with Q1 revenues of $1.34 billion, a gain of 61% year-over-year. The high revenues pushed earnings up, too. Net income for 1Q22 reached $79.8 million, for a diluted EPS of $3.08. Both the total revenue and the diluted EPS were the best in more than two years, and ArcBest’s gains were broad based, reflected in all of the company’s operating segments.

Even so, ArcBest stock has lost 36% this year. What this comes down to, is a stock that investors need to pay more attention to – in the view of Credit Suisse analyst Ariel Rosa.

“ARCB is the cheapest stock in our coverage… It has an attractive 12% free cash flow yield (the highest in our coverage). The company has demonstrated strong performance over the past few years, yet its current multiple reflects significant skepticism as to the sustainability of those results, in our view… If it can sustain these results as demand normalizes, particularly an LTL operating ratio below 90%, it could see considerable upside to its share price,” Rosa opined.

To this end, Rosa rates ARCB an Outperform (i.e. Buy), unsurprisingly in light of his comments, and sets a $102 price target that suggests a 33% one-year upside for the stock. (To watch Rosa’s track record, click here)

Overall, the unanimous Strong Buy consensus rating on this stock, supported by 4 recent analyst reviews, makes it clear that Rosa is not alone in his bullish view. The average price target here, $129.50, is even more optimistic, suggesting an upside of ~70% from the current trading price of $76.23. (See ARCB stock forecast on TipRanks) 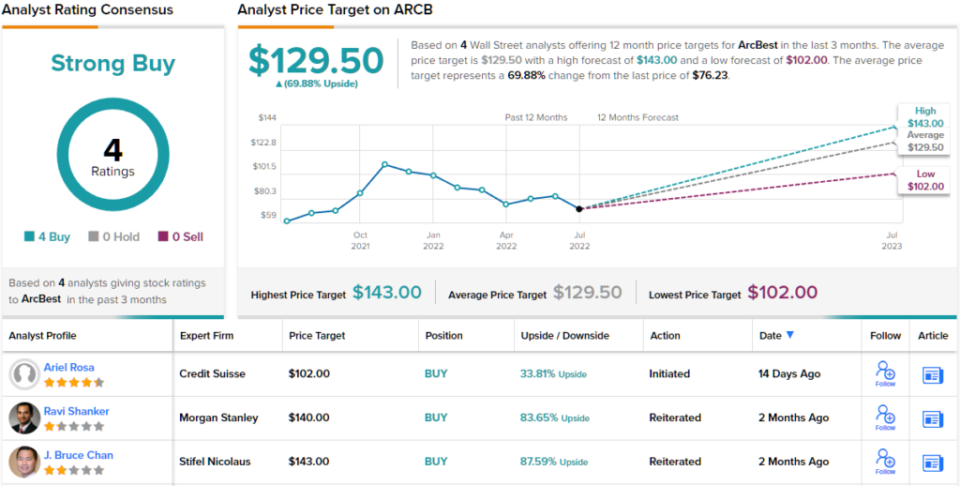 In recent years, the automotive sector has found important support from customer financing, which has driven both new and used car sales as prices have increased. Looking forward, that support is only going to become more important – but also more complicated as interest rates rise. Our next stock, Open Lending, dwells in this sector.

The Texas-based company provides a range of services for financial institutions and lenders, particularly automated loan analytics, risk-based pricing and risk modeling, and automated decision technology for automotive lenders. Open Lending operates throughout the US, and has been in business since 2013. The company went public in 2020.

Since entering the public markets, Open Lending’s shares rose fast to peak above $40. The stock stayed at or near that level through most of 2021, but in September of last year began to slip. Year-to-date, LPRO shares are down 57%.

A look at the numbers may help to explain Open Lending’s share decline. The company is facing headwinds due to inflation and higher interest rates, both of which make it more expensive for customers to purchase vehicles. Yet, the most recent quarter, 1Q22, showed a top line of $50.1 million, which was up 13% year-over-year. Business remained strong in Q1, with the company certifying 43,944 loans compared to 33,318 in the year-ago quarter – for a gain of almost 32%. Net income also rose from $12.9 million to $23.2 million, or more than 79% y/y.

In his note on Open Lending, JMP analyst David Scharf, who holds a 5-star rating, writes: “The company delivered a very strong first quarter, with both top- and bottom-line upside, as well as better-than-forecast loan certification volumes (certs). Furthermore, our belief is that the reiteration of full-year revenue, EBITDA, and cert guidance will be viewed positively in light of investor sentiment that was painting a more dire portrait of auto loan demand during 2022… We believe that the unprecedented supply chain headwinds that have weighed on dealer inventory and lending volumes, as well as the effects of credit normalization on carrier profit-sharing, are priced into LPRO shares.”

Standing squarely in the bull camp, Scharf rates LPRO an Outperform (i.e. Buy), and his $28 price target implies a robust upside of 189% for the next 12 months. (To watch Scharf’s track record, click here)

All in all, out of 9 analysts who have weighed in on LPRO shares recently, 7 have rated it a Buy, while only 2 rated it a Hold, giving the stock its Strong Buy consensus rating. The average price target of $26.22 suggests ~171% upside from the current share price of $9.69. (See LPRO stock forecast on TipRanks) 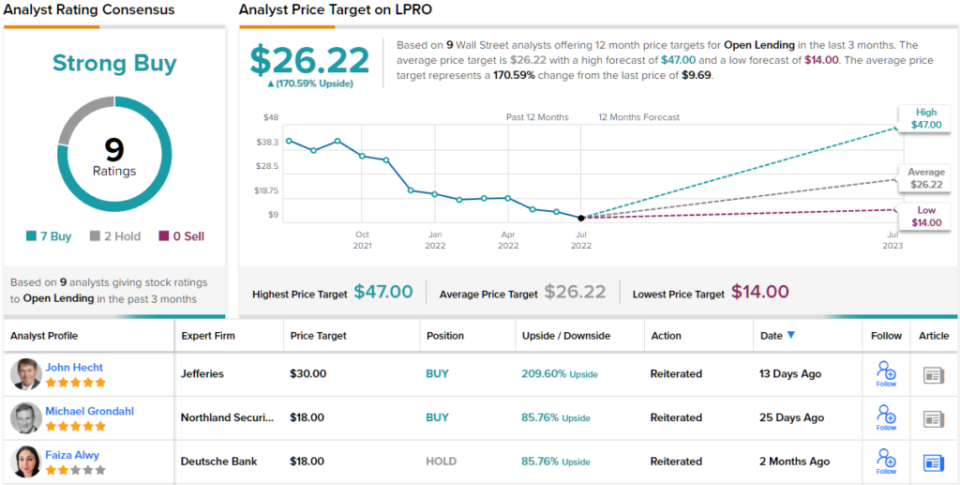