U.S. inflation came in hotter than expected in June as Americans continued to grapple with sky-high gas prices and soaring rent costs.

The consumer price index (CPI) rose at a 9.1% annual rate last month, the Labor Department reported on Wednesday. That marks the largest annual increase in the popular inflation gauge since November 1981.

The latest numbers blew past expectations, as economists on Wall Street had projected an 8.8% annual jump.

While some investment banks thought inflation would hit its peak months ago, consumer prices have remained elevated in the U.S., and the recent downturn in commodity prices and the cooling housing market have yet to be reflected in CPI data.

“Peak inflation will have to wait,” Rusty Vanneman, the chief investment strategist at Orion Advisor Solutions, told Fortune. “While there are some hopeful signs that we’re getting close to the peak in the inflation growth rate, such as lower commodity prices, we likely won’t see the actual peak for months, if not until early next year.”

The rising cost of living for Americans in June leaves the Federal Reserve on track for another interest rate hike at their next Federal Open Market Committee (FOMC) meeting later this month. So far this year, the Fed has increased rates three times in an attempt to cool the economy and combat inflation, but some experts are now calling for an even more aggressive stance.

“The Fed is still behind the curve, even after a few rate hikes this year and the start of its balance sheet reduction plans,” Nancy Davis, the founder of Quadratic Capital Management, told Fortune.

Quincy Krosby, the chief equity strategist at LPL Financial, went so far as to argue that a 1% rate hike could be in the cards for the Fed this month after June’s red-hot inflation reading. And Bill Adams, the chief economist at Comerica Bank, noted that “a full percentage point increase looks likelier than a half percentage point one.”

The latest CPI data has some economists worried that inflation could prove to be a more persistent issue than the Fed is anticipating, but others argue that there are positive signs that indicate consumer prices could fall through the second half of the year.

Here’s the bad news about the latest numbers, but also some positive signs that inflation could be near its peak.

Headline inflation, which unlike core inflation includes volatile food and energy prices, came in well above economists’ expectations in June.

The European energy crisis, which has been exacerbated by the ongoing war in Ukraine and subsequent western sanctions, has thrown global energy markets into chaos in recent months.

As a result, energy prices surged 41.6% year over year in June, with gasoline prices rising 60% compared to a year ago, and electricity costs jumping 13.7% over the same period. That pushed headline inflation well above economists’ estimates.

The headline inflation data also revealed a disturbing trend for services inflation. For months now, economists have been talking about an ongoing rotation from goods spending to services spending as Americans get back to their summer travel plans with COVID-19 restrictions fading.

In June, we saw the rotation economists were expecting, but unfortunately, the increased services spending is leading to inflation in the sector that could prove to have more staying power.

“Today’s print blew past expectations, but the worst element of it is that, as predicted, services inflation is really picking up now to match goods inflation,” Stephen Miran, the cofounder of Amberwave Partners and a former senior adviser for economic policy at the Department of the Treasury, told Fortune. “Services inflation tends to be a lot stickier and requires a recession to bring it down. We might not see services inflation back in a comfortable zone until 2024.”

Services inflation, excluding energy services, rose 0.7% in June, up from 0.6% in May, and now stands at a 5.5% annual rate. Airfares were a major leader in the sector, with prices rising 34.6% from a year ago.

Broad-based inflation and the soaring cost of rent

Inflation in June was also very broad-based, with core CPI, which excludes volatile food and energy prices, rising 5.9% compared to a year ago. Economists on Wall Street were expecting a 5.7% jump.

The major driver of core inflation was shelter costs, which represent roughly one-third of CPI.

Shelter costs jumped 5.6% from a year ago in June, after rising just 1.7% in the previous three months combined. Quadratic Capital Management’s Nancy Davis says there could be more room for shelter costs to rise moving forward as well, given the jump in home prices over the past year.

“Is there anything in the U.S. whose price has increased by that little in the past quarter? Does that seem even close to an accurate number to anyone familiar with rental costs?” Davis said of the latest shelter CPI data. “For perspective, the S&P/Case-Shiller National Home Price Index is up about 20% year over year. We would expect some difference between the CPI ‘shelter’ number and the Case-Shiller Index. One measures rent and the other the value of single-family housing. But a difference of 400%? Someone is way off.”

Persistent food inflation and a big risk for stock investors

Food inflation also continued to be an issue in June, with the food index rising 10.4% compared to a year ago. Food-at-home costs have now jumped by at least 1% for six straight months.

“The biggest impact affecting the agriculture sector, apart from rising interest rates, is inflation in the energy sector and the rising prices of input costs. Increased input costs cut into the already thin revenue margins for the farmer and the additional costs are then passed along to the consumer,” he said. “While the Fed is doing what they can, I anticipate that inflationary pressure won’t ease until sometime next year.”

David Russell, VP of market intelligence at the online securities and futures brokerage firm TradeStation Group, also told Fortune that this latest CPI reading is a “big risk for stocks.”

“Wall Street is already expecting the slowest profit growth since late 2020, so the mood could remain pretty grim with results due in the coming weeks,” he said. 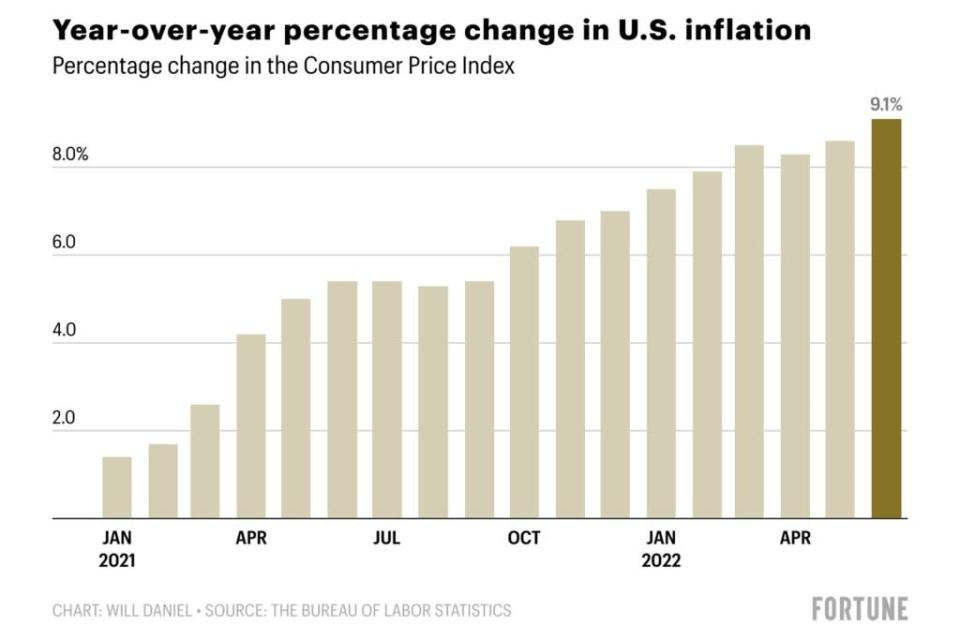 There were some bright spots in June’s inflation reading, however.

First, gas prices were a major contributor to CPI last month, but prices at the pump have come down from highs of over $5 per gallon in June to just $4.63 as of Wednesday, AAA data shows.

President Biden said in a statement on Wednesday that while inflation remains “unacceptably high,” the latest CPI data is also “out-of-date,” because it measures price increases that have already happened.

“Energy alone comprised nearly half of the monthly increase in inflation. Today’s data does not reflect the full impact of nearly 30 days of decreases in gas prices, that have reduced the price at the pump by about 40 cents since mid-June,” he said.

A global, not local, phenomenon

Secondly, inflation remains a global issue. Countries around the world are experiencing rising consumer prices due to the ongoing war in Ukraine, COVID-19 lockdowns, and deglobalization, not just the U.S.

Inflation in Argentina topped 60% in May, according to the country’s INDEC statistics agency. And economists surveyed by the country’s central bank forecast a nearly 73% annual inflation rate by the end of the year, Bloomberg reported in June.

But not only the countries that have typically dealt with high inflation are seeing price increases.

Inflation in the U.K. also hit a 40-year high in May, rising at a 9.1% annual rate. And euroarea annual inflation is expected to top 8.6% in June. Even Japan, which has historically dealt with deflation, is seeing consumer price increases become an issue of late.

Not every economist or Wall Street analyst is predicting doom and gloom when it comes to inflation.

Amberwave Partners’ Stephen Miran said that he expects “core goods inflation to come down to earth” in the months ahead. He pointed to rising inventories at retailers, which will lead to stockpiles of electrical components and other goods, as a key to the incoming reduction of price pressures.

And Mark Haefele, the chief investment officer at UBS Global Wealth Management, said in a Wednesday note that he believes inflation will begin to fall in the coming months.

“We continue to think inflation will start returning to more normal levels, averting the need for a further hawkish turn in monetary policy,” he said. “This process, however, will be gradual, and inflation will likely remain above the Fed’s 2% target for some time to come.”

Finally, Jay Hatfield, chief executive officer at Infrastructure Capital Management, told Fortune that he expects the strong U.S. dollar will help to push commodity prices lower in the second half of the year, leading inflation to fall.

“We forecast that this print will mark the peak of inflation as the Fed’s 15% shrinkage of the monetary base, which is the fastest decline since the Great Depression, will curb inflation,” he said.

This story was originally featured on Fortune.com