Amazon stock enjoyed a nice rally ahead of its 20-for-1 stock split but then struggled afterward.

For the Google parent Alphabet’s stock, the shares rallied about a week ahead of the split, which began trading on a split-adjusted basis on July 18.

The stock split does not appear to have been the catalyst that some investors were hoping for. It didn’t help that Snap  (SNAP) – Get Snap Inc. Class A Report reported incredibly disappointing quarterly results, which sent its stock plunging almost 40% in a single session.

With Alphabet set to report earnings after the close on Tuesday, investors may be a bit worried about a disappointing result.

We’ve seen the stock fall ahead of the event; it’s down in each of the past two weeks and down slightly on July 25. Let’s look at what the chart is telling us.

Trading Alphabet Stock Ahead of Earnings 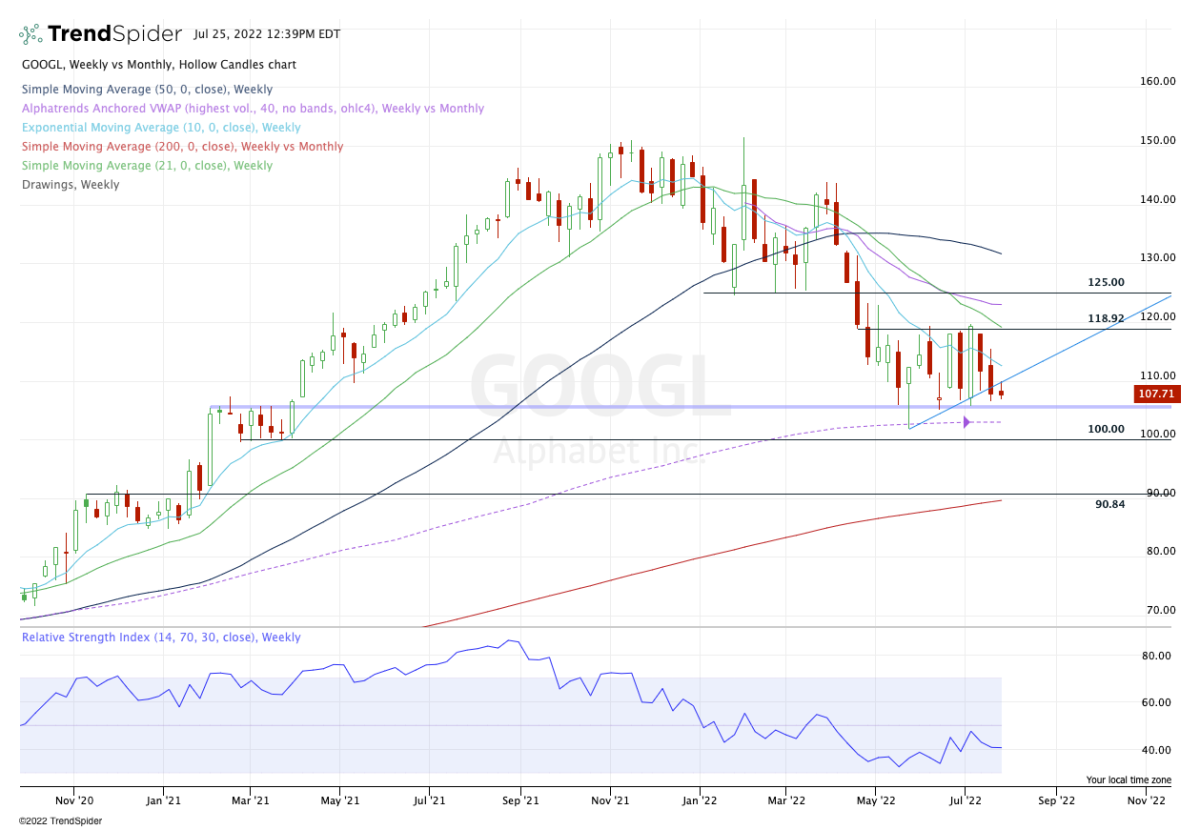 Alphabet stock is near a critical support level, which comes into play near $105. The 2022 low sits just below this zone, at $101.88, and right near the monthly VWAP measure.

As you can see on the chart above, Alphabet stock was also forming a series of higher lows, a bullish technical development. That’s as the shares were riding uptrend support (blue line), although that level has since failed.

Additionally, there’s been clear resistance up near $120, while Alphabet is currently below all its short- and medium-term moving averages.

If Alphabet stock breaks below this, it loses the $105 breakout level, the 2022 low, the monthly VWAP measure and the psychologically relevant $100 mark — which was also support in 2021.

That could open the door down to the low $90s, which was a prior breakout area and where the 200-week moving average comes into play.

I recognize that that level seems somewhat far away and thus unlikely. Keep in mind, though, that the quarter doesn’t have to be a disaster for it to disappoint investors.

While Alphabet has been one of the strongest stocks in tech, that doesn’t mean it’s immune if the earnings really underwhelm investors — and if it comes alongside a broader-market decline in the coming days and weeks.