Amazon  (AMZN) – Get Amazon.com Inc. Report is in the news on Friday and not necessarily because of the stock’s blistering rally over the past few weeks.

Instead, it’s because the company is scooping up iRobot  (IRBT) – Get iRobot Corporation Report stock for $1.7 billion in an all-cash deal. Amazon and iRobot agreed to a buyout price of $61 a share, sending the robotic-products company about 19% higher at last check.

The deal makes sense for Amazon, which continues to forge into consumers’ everyday lives, be it with smart speakers, security cameras, streaming devices and, now, robotic cleaning devices.

But it’s important to note that Amazon stock is up more than 40% from its low in May.

The tech and online-retail giant’s shares are down on Friday (along with the rest of the market following the stronger-than-expected jobs report). But coming into today’s session, Amazon had rallied in six of the past seven sessions and will likely end this week with its third straight weekly gain.

Now the shares are coming into a key area on the chart. What’s next for Amazon stock? 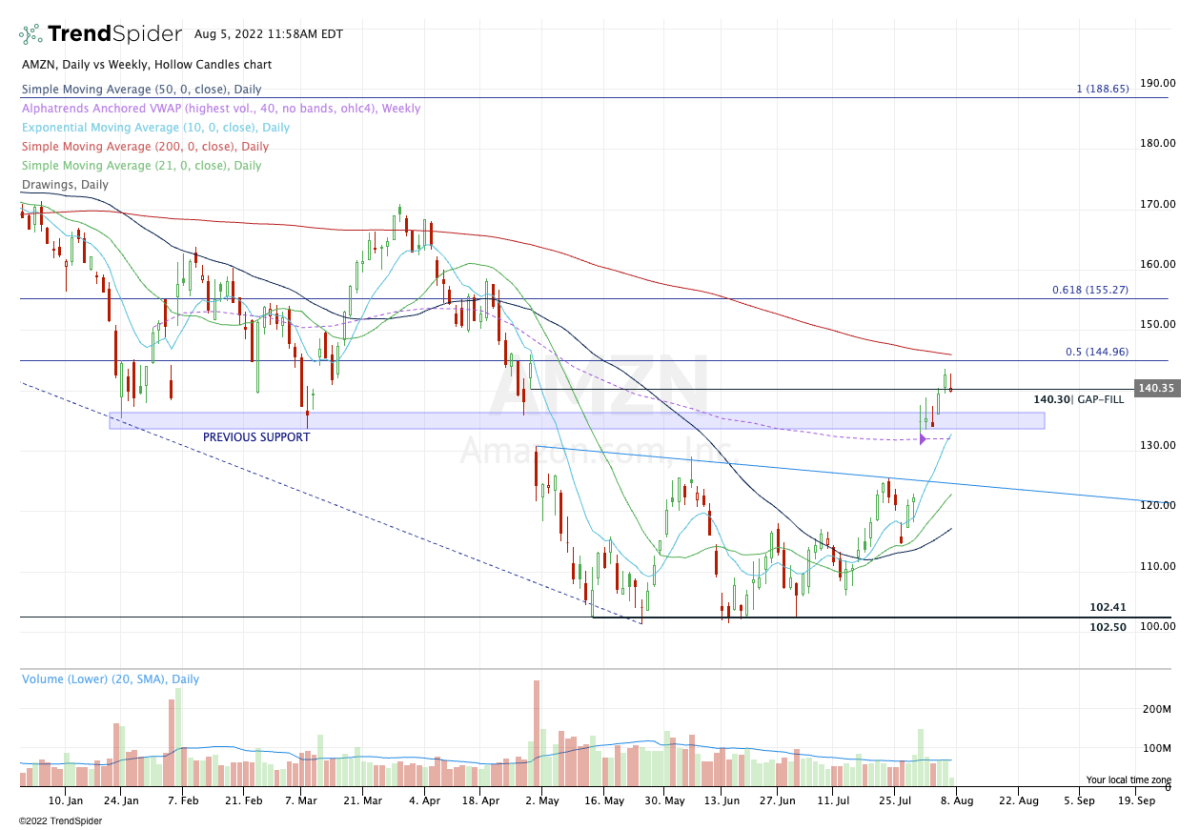 With this week’s rally, Amazon stock officially filled its gap from late April at $140.30. It pushed higher on Thursday but is threatening to retreat on Friday. This rally sent the shares right to our upside target zone from the earnings trade.

Near this zone the stock finds its 50% retracement from the 2022 low to the all-time high. It’s a big retracement level. Further, the 200-day moving average also comes into play in this zone.

If Amazon rallies to this level, then through it, the bulls might look for a push to the $150 to $155 area — with the 61.8% retracement coming into play near the latter.

Despite this potential, $145 may be a good place for short-term bulls to lock in some profits and/or raise their stop-losses.

On the downside, I’m interested in how this stock will perform. Depending on its price action, it could tell us whether we’re seeing a new sustainable uptrend or simply a vicious bear market rally.

Regardless of which one it is, I want to see how Amazon stock handles the $132 to $135 area. In that zone we have the weekly VWAP measure, the rising 10-day moving average and a major previous support zone.

On a pullback to this zone, aggressive buyers can try to buy the dip. If it holds, the $145 area is a reasonable upside target in the short term.