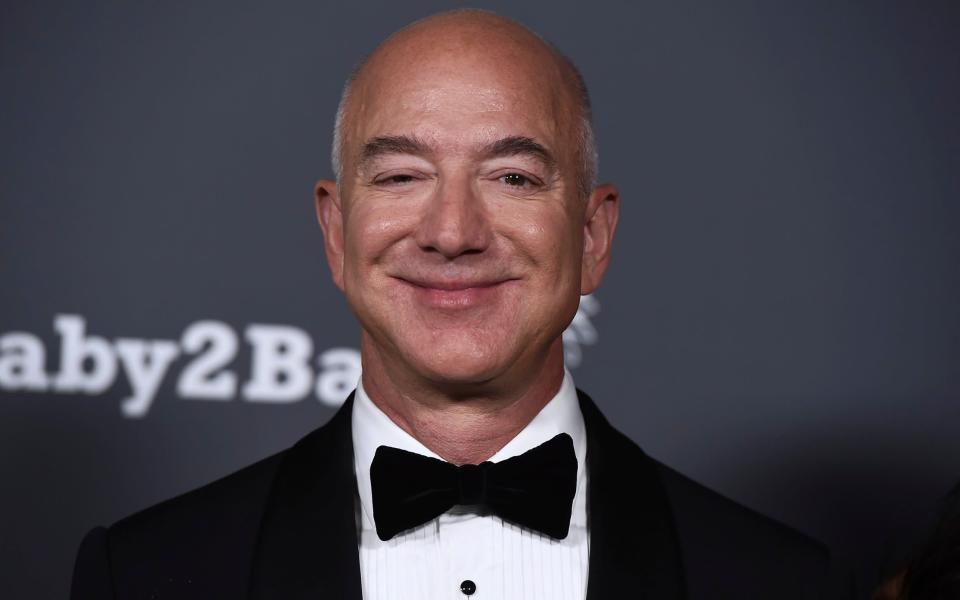 Amazon is putting the brakes on its global recruitment spree after reporting its second loss in a row.

However investors seized on rising sales to send shares sharply higher, adding $14bn to the fortune of founder Jeff Bezos.

The company will continue to hire software engineers, particularly for its Amazon Web Services and advertising businesses, but will be cautious about hiring for other departments, chief financial officer Brian Olsavsky said.

He added: “We will continue to add headcount, but are also mindful of the economic condition.”

Investors overlooked the tech behemoth’s $3.8bn (£3.1bn) fall into the red to focus instead on unexpected growth in sales driven by US consumers and demand for the company’s cloud computing services.

Amazon posted gross quarterly revenues of $121.23bn after the bell on Thursday, outperforming market analysts’ predictions of $119.09bn by 1.8pc.

However, the net loss in the three months to 30 June – its second in a row – was a sharp reversal of the previous year’s $8.1bn profit.

Most of the losses came from settling a $1.9bn tax liability and paying down $7.6bn in “short-term” debts.

Amazon employed 1.5m people globally as of June 30, down about 100,000 people from the previous quarter. Most of the decrease was due to attrition in the company’s warehouse and delivery network.

Amazon’s own revenue predictions were between $116bn and $121bn, though investor magazine Barron’s noted: “Anywhere in that range would be the company’s slowest growth quarter in more than 20 years.”

Both tech companies were expected to defy the most recent US economic data showing a second consecutive quarter of contraction. That data was released a day after the US Federal Reserve raised rates by 75 basis points.

Amazon’s share price has defied the most recent stages of the global tech stock rout, growing 12pc over the past month to around $120. At the close of trading on Thursday, however, it was down a third on July 2021’s price of $181. After results were announced it briefly surged by up to 14pc, adding around $14bn to the value of Mr Bezos’s holding.

AWS’ performance stands in broad contrast to rivals Google and Microsoft. Google’s cloud division deepened its losses by $300m in results unveiled this week, while Microsoft reported steady revenue growth across all of its cloud-linked product lines such as Office 365 and its Azure hosting business.

Bank of America analyst Justin Post predicted in a client note this week that US retail giant Walmart’s performance might indicate headwinds for Amazon.

Walmart, which is the world’s second biggest retailer after Amazon, cut its quarterly profit outlook this week. Bosses cited fears over US inflation, foreseeing greater spending on food and less on consumer gadgets of the type sold by Amazon.

In contrast to Amazon, Apple’s market performance has remained largely untroubled by macroeconomic challenges. Its shares were up 8pc over the past year and showed growth of 14pc in the last four weeks, trading at around $157. They were up 2pc in after-market trading following its positive results.

“Apple is outperforming because it’s a place of safety for investors,” former Piper Jaffray analyst Gene Munster told Bloomberg ahead of the results call. “Every company will be impacted by the upcoming slowdown. Apple should fare better.”

Other tech companies of comparable size have shown less buoyancy. Meta revealed its first ever quarterly decline this week, while Google’s results on Tuesday showed slowing growth in both revenues and profits.

Only Twitter is outperforming the tech-heavy Nasdaq 100 index so far this year, though that company faces its own challenges after Elon Musk’s abortive $44bn takeover bid led to ongoing litigation.

Apple warned in April that supply problems stemming from lockdowns in China, where most of its production is located, would hit revenues by between $4bn and $8bn during the quarter. Other US companies similarly affected include electric car-maker Tesla, which took a noticeable hit in deliveries earlier this year after a COVID-19 lockdown in Shanghai temporarily shuttered its factory there.

Apple’s performance was widely expected to be hit by the general slowdown in consumer spending, which is being fuelled by fears of spiralling inflation later this year. British consumers face inflation of more than 11pc, as measured by the Retail Price Index, while domestic energy bills are set to punch through £3,500 a year according to estimates from personal finance guru Martin Lewis.

Much of the inflationary pressure stems from soaring fuel prices, in turn driven by Russia’s invasion of Ukraine and subsequent instability in oil and gas. Vladimir Putin has used Russia’s chokehold on European gas supplies in particular to try and deter further Western support for Ukraine.