It’s been a brutal wake-up call for investors, as they’ve seen the value of many tech stocks erode so far in 2022.

It’s been the worst first-half start for the S&P 500 in five decades and now fears of a recession are pressuring semiconductor stocks even more. Nvidia  (NVDA) – Get NVIDIA Corporation Report, Intel  (INTC) – Get Intel Corporation Report and others are all feeling the pinch.

For now, Micron’s  (MU) – Get Micron Technology Inc. Report earnings report after the close remains a bit of a wildcard for semi-stock investors, as it sits on a critical support level.

Regarding AMD stock specifically, the valuation has been pummeled, as the stock price has been more than halved while earnings estimates remain steady — at least so far.

To some degree, investors are likely beginning to look at this as a value stock at sub-19 times earnings. That’s even as short-term headwinds may persist. Let’s look at the chart. 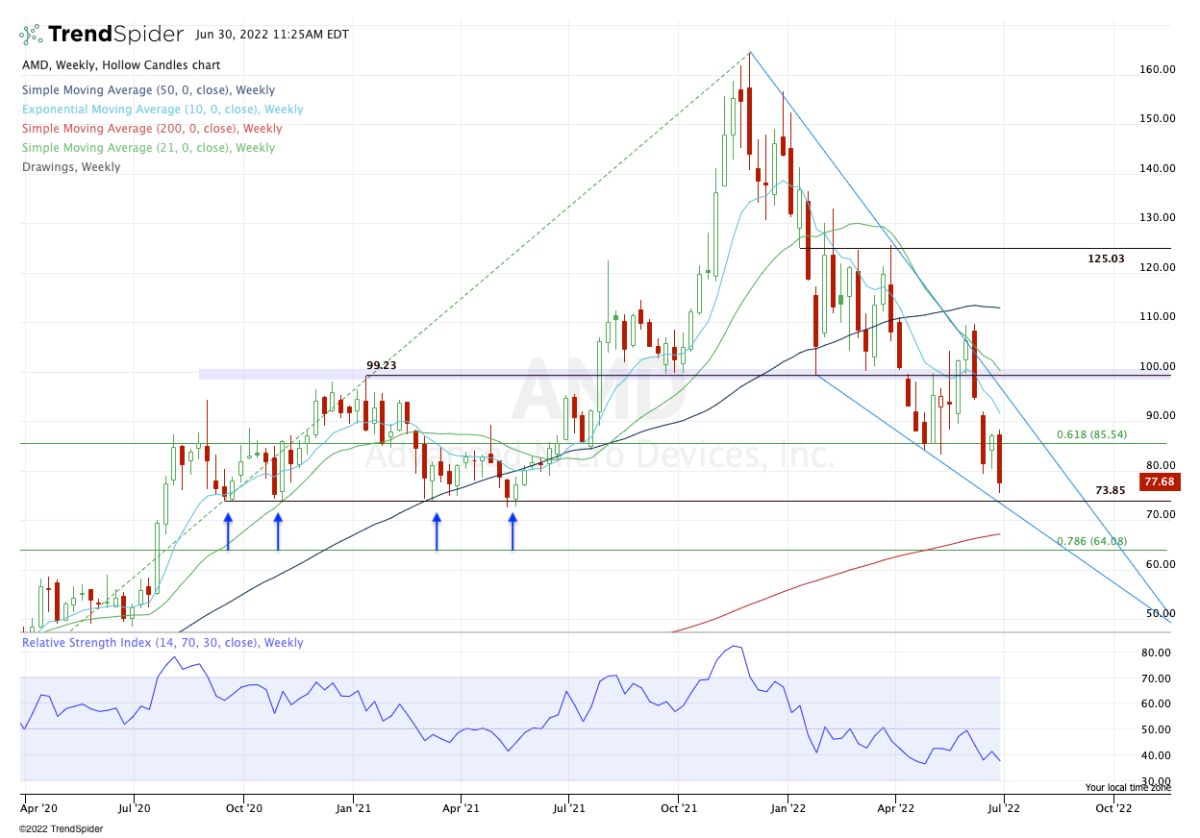 In late April, AMD stock did a great job finding support at the 61.8% retracement and bouncing back to the $110 area.

For bulls to maintain momentum, I thought it was important for it to hold above $100 and the 10-week moving average. However, AMD failed to do so and has now traded lower in three of the last four weeks.

Amid the recent decline, shares broke back below the 61.8% retracement and are hitting new lows as we speak. That has me keep a very close eye on the $73 to $75 area.

I don’t know that it will be support, as AMD stock may want to trade down into the mid- and upper-$60s.

However, in the $73 to $75 zone, AMD has a big level of former support. That area was support for several quarters spanning from 2020 to 2021. At the very least, I would expect some sort of minor bounce from this area.

If we get it and AMD stock can reclaim $80, then recent prior support at $85 may be in play.

Regardless of whether AMD stock bounces from this zone, it may still end up breaking in the future — particularly if it remains in a downtrend.

If that’s the case, investors can keep an eye on the rising 200-week moving average and the 78.6% retracement near $64.

From an investing perspective, there may certainly be value in AMD stock down at current levels. From a trading perspective, we need to follow the levels and respect support and resistance. Market participants should know which approach suits them best before entering a position.