Even as consumer spending cools, one place buyers continue to splurge is at the car dealership.

Auto executives reporting earnings earlier this week displayed confidence that not only would demand for cars and trucks remain resilient in the second half of the year, but also an easing of supply-chain disruptions would help power profits in coming quarters.

A customer-order backlog, historically low dealership stock and car shoppers paying higher prices for vehicles all have led to a string of profitable quarters for most global car companies. The unique dynamic is fueling optimism across the industry that it can weather the mounting economic uncertainty better than it has done in past recessions.

The financial boost is critical for these manufacturers, which are spending billions of dollars to build battery plants and shift their lineups to electric vehicles.

“Inventory on the ground at dealers hasn’t changed in really about six quarters, even as production has gone up,” said Paul Jacobson, GM’s chief financial officer. “There’s a big pocket of demand that hasn’t been met yet,” he added.

The upbeat tone is unusual for the car business, which is typically among the first sectors to get hit by any downturn in consumer sentiment. 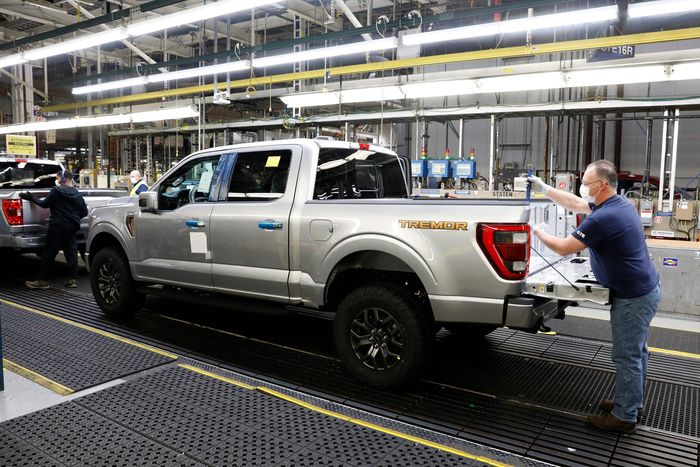 Ford is gearing up to cut costs as it shifts manufacturing from traditional vehicles like the F-Series truck in Dearborn, Mich., to electric-vehicles. Photo: jeff kowalsky/Agence France-Presse/Getty Images

The U.S. government said Friday that household spending rose faster in June, but economists say overall it has slowed sharply when inflation is taken into account. Retailing-giant Walmart Inc. and consumer-products firm Procter & Gamble Co. both warned this week that higher prices were leading shoppers to pull back, an ominous sign for the U.S. economy.

Some auto makers are starting to take steps to recession-proof their business, including initiating widespread layoffs, and to respond to other pressures, such as higher commodity costs, rising interest rates and factory shutdowns in Asia related to rising Covid-19 infections.

GM said on Tuesday that it would curtail hiring and take precautions to slim down further if economic challenges worsen.

Ford has also embarked on a broad restructuring to shave $3 billion in annual costs and bolster its transition to electric-vehicles. In coming weeks, the Dearborn, Mich., auto maker is expected to disclose plans to cut more than 4,000 white-collar workers, The Wall Street Journal reported earlier this month.

“We absolutely have too many people in certain places, no doubt about it,” said Ford Chief Executive Jim Farley Wednesday. He didn’t confirm or respond directly to questions about the workforce reductions.

Auto executives and dealers say the industry overall is in a much stronger position than it was in previous downturns. It is also aided by somewhat unusual conditions: The prolonged inventory crunch on dealer lots has led to accumulating pent-up demand and buyers willing to pay a hefty premium for cars and trucks that are available.

Empty dealer lots, above-sticker prices and online sales—supply-chain issues and a shift toward electric vehicles have accelerated changes in the car-buying process. We visit a car dealer to see how consumers and sellers are adapting and what changes might be here to stay. Photo: Adam Falk/The Wall Street Journal

Mike Manley, chief executive of publicly traded dealership chain AutoNation Inc., said if there is an economic downturn, consumers’ appetite for mid- to higher-priced vehicles, including those in the luxury category, is likely to remain strong.

“If we are going to go into a recessionary period, that’s going to be the middle to the last demographic that gets hit,” Mr. Manley said. AutoNation, earlier this month, said as many as 50% of the vehicles that are incoming to its dealerships over the next few months are presold, and some models, such as the Ford Bronco, are sold out for more than a year.

Meanwhile, the average price paid for a vehicle continues to nudge higher, hitting another record in June of $45,844, according to industry research firm J.D. Power.

And more buyers are taking out bigger car payments. The number with auto loans costing at least $1,000 a month hit a record 12.7% in June, according to Edmunds, a car-shopping website and data-analytics company.

Stellantis CEO Carlos Tavares said Thursday that the company’s global shipments could fall about 50% and it would still break even. He said he believes Europe is more at risk of a recession and the U.S. would have a milder downturn.

“We have a very low break-even point,” Mr. Tavares said this week on the company’s earnings call. “That is going to give us significant sustainability to face any unpredictable crisis.”

Still, supply-chain disruptions and a long-running computer-chip shortage continue to weigh on the industry’s outlook. GM’s sales in the second-quarter were disproportionately hit by such obstacles, leaving it with 95,000 unfinished vehicles it couldn’t sell during the period.

“We’ve been dealing with some of these chip issues for the last couple years,” GM’s Mr. Jacobson said. “This one was a little late breaking.”

The supply constraints are depressing sales, which in the U.S. were down 18.2% industrywide to 6.7 million vehicles in the first six months, according to Wards Intelligence, a firm that tracks auto industry data.

How has the car-buying process changed for you in recent years? Join the conversation below.

Affordability is also becoming a bigger concern as surging car prices have pushed many budget-conscious buyers out of both the new and used car markets. Some executives say once dealership stock bounces back, it could be difficult for car companies to sustain the premium pricing.

“Consumer sentiment is all over the map,” Tesla Chief Executive Elon Musk said on the EV maker’s earnings call this month.

Tesla had its first sequential decline in quarterly profit in more than a year in the second quarter, hurt by an extended shutdown at its Shanghai plant due to local Covid-19 restrictions. But Mr. Musk said he isn’t concerned about weakening demand for Tesla, whose customers face monthslong waits for many vehicle configurations.

“We have so much excess demand that was really just not an issue for us,” he said on the call.

Write to Ryan Felton at ryan.felton@wsj.com