Expectations for General Electric Co.’s second-quarter profit and sales have been reduced significantly in recent months, but there are still those on Wall Street who believe they haven’t come down enough for the industrial conglomerate to break its streak of revenue misses.

GE GE, +0.09% is scheduled to report earnings for the quarter through June on July 26, before the opening bell.

The company, which will be losing its industrial conglomerate status given its plan to split into three independent companies by early 2024, has beat profit expectations the past five quarters, while at the same time missing revenue forecasts.

Investors have been especially disappointed in the past two quarterly reports, as the stock tumbled 10.3% the day the company reported first-quarter results and slumped 6.0% after fourth-quarter 2021 results.

Perhaps that’s why Wall Street has been preparing for another disappointing report. 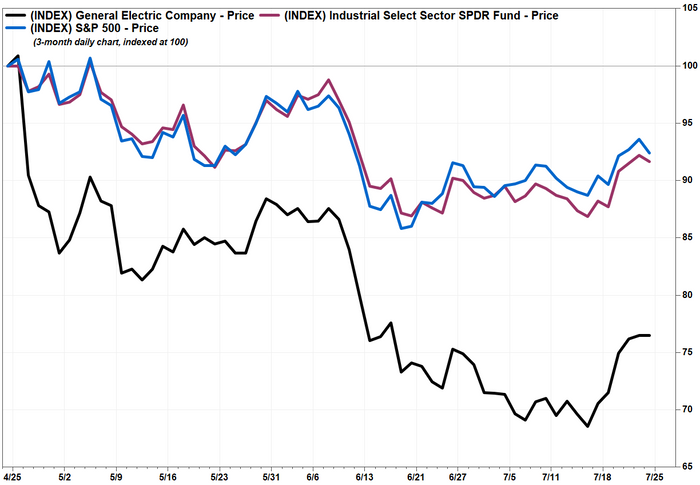 Given GE’s recent history and amid growing fears that aggressive interest rate hikes by the Federal Reserve to quell historically high inflation will lead an economic slowdown, analysts have been slashing their estimates for the latest quarter and the full year in recent months.

The FactSet consensus for second-quarter earnings per share has dropped to 37 cents a share from 66 at the end of March, while the revenue estimate has fallen to $17.36 billion from $18.69 billion.

More than half (11) of the 21 analysts surveyed by FactSet have cut their stock price targets over the past months, according to FactSet, to knock the average target down to $90.44 from $100.00. The average target was $116.56 at the end of March.

Joshua Pokrzywinski at Morgan Stanley was one of the analysts that cut their target, as he trimmed his last week to $95 from $100. He believes consensus forward estimates still need to come down further.

“We would avoid shares in front of 2Q earnings as [second-half] expectations need to come down, even though shares have more than discounted a slower improvement in Healthcare supply chain and Renewables’ profitability,” Pokrzywinski wrote in a note to clients.

Although he reiterated his overweight rating on GE’s stock, citing “undemanding valuation” and a set of businesses that are generally more recession resistant, he believes GE’s second-quarter results will lead to even further estimate cuts.

“As we expect negative revisions to be fairly limited across industrials this quarter as the real economy has not yet caught up to stock performance, GE will likely stand out to the negative,” Pokrzywinski wrote.

Here are second-quarter FactSet consensus estimates for some other closely watched financial metrics: