In most bear markets, extreme sentiment and extreme oversold conditions have created a rally.

Is it a bear market? Oh, I suppose that depends on your definition. If you think the media, which somewhere along the line defined a bear market as down 20%, then I suppose we’re not in a bear market.

I am not one, when the S&P 500 goes down only 19% while the majority of stocks are in downtrends for more than a year, who thinks we can call that a correction. I have said many times here that I think the bear market started in the first quarter of 2021 since that is when the majority of stocks peaked and began their downtrends. We had a Nifty Fifty type market in 2021 as a handful of index moving stocks sucked the life out of everything else that traded.

If my definition is correct – and there is no rule that says it is – but if it is, then we are almost 18 months into this bear market. So, is this a bear market rally or the start of something bigger? I do not know. I didn’t know that I was going to think we were in a bear market after that February 2021 peak until well after the fact when I saw how many stocks could not recover and every attempt at recovery produced a lower high and a lower low.

In most bear markets we have seen extreme sentiment and extreme oversold conditions create a rally. Rarely does anything go down in a straight line. In the spring of 2008 we had a 10% rally that lasted nearly two months and even at that didn’t bother to head south in a major way for a few months after that. In 2000-2003 the S&P 500 made it almost back to the old high six months after the initial peak in 2000. A year later, post 911 we made a terrific low and rallied for six weeks and then churned back and forth for another six months before heading south again.

This is a long way of saying I do not know how this rally will develop, but we can note a few things today. Using my Oscillator, we got short-term overbought last Thursday, and the market did not turn down immediately. That is the first time in 2022 we held up even after being short-term overbought. That is a slight change.

Now let’s move the McClellan Summation Index where it now requires a net differential of negative 6,200 advancers minus decliners on the NYSE to halt the rise. That’s a lot. Consider that there are approximately 3,400 issues that trade on the NYSE daily. So, this means we’d need two horrific market days just to halt the rise and another to turn the indicator lower. That’s what makes it overbought (but not negative.) 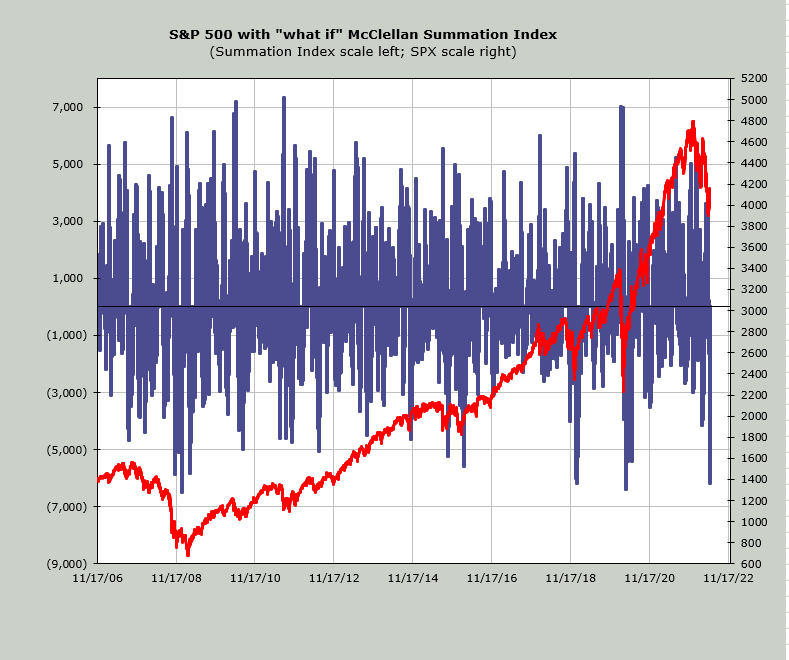 I suppose we will know within the next 1-2 weeks if this is more like those two readings from late 2008/early 2009 or more like the others. My base case is that it is not like those and more likely a hybrid where we have a short-term dip/pullback and another rally attempt.

Get an email alert each time I write an article for Real Money. Click the “+Follow” next to my byline to this article.

Real Money’s message boards are strictly for the open exchange of investment ideas among registered users. Any discussions or subjects off that topic or that do not promote this goal will be removed at the discretion of the site’s moderators. Abusive, insensitive or threatening comments will not be tolerated and will be deleted. Thank you for your cooperation. If you have questions, please contact us here.

Thank you, your email to has been sent successfully.

We’re sorry. There was a problem trying to send your email to .
Please contact customer support to let us know.

Please Join or Log In to Email Our Authors.