Bitcoin miners are selling off their mined tokens as the tumbling price of bitcoin erases profit margins at the same time capital markets are becoming less friendly. 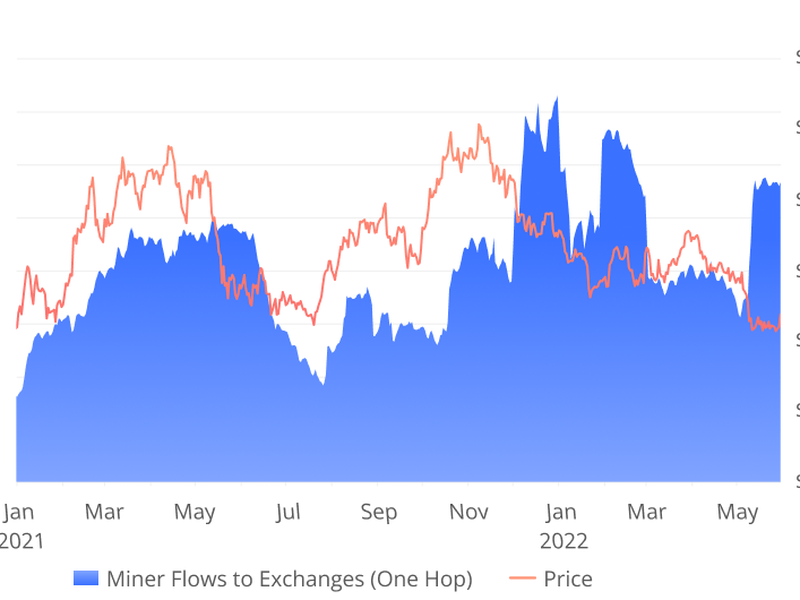 Miner flows to exchanges have reached their highest point since January, Compass Mining – a bitcoin mining services company – wrote in a research note today using data from CoinMetrics. “Miners may begin to sell hodl’d Bitcoin into the open market,” wrote Compass. “At the very least they are feeling the pain after the last major dip in price. Couple this with a downwards difficulty adjustment – indicating miners powering off – and it seems miners may be hitting a wall in profitability.”

Mining bitcoin (BTC) has become less profitable as the price of the crypto has trended downwards, with popular machines like Bitmain’s Antminer S9 becoming money losers at electricity prices of six cents per kilowatt hour. Struggling miners who would prefer not to shut down their rigs can look to raise capital in the debt or equity markets and/or sell off bitcoin holdings.

Argo Blockchain (ARBK) plans to raise debt and sell some of its bitcoin to cover expenses, the company said in an analyst call for its first quarter results. Core Scientific (CORZ), the world’s largest miner by hashrate, has already sold some of its mined bitcoin this year and plans to continue doing so. Previously a confirmed HODLer, Riot Blockchain (RIOT) sold nearly half of its mined bitcoin in April after having also sold a sizable amount in March.

Cathedra Bitcoin in a May 30 statement said it sold 235 bitcoins during the month in a move to raise liquidity and “insulate” itself from further price declines. The company also had a tough April, operating at 45% of expected hashrate throughout the month thanks to storms affecting its North Dakota site.

There’s also Marathon Digital (MARA), which – at its earnings call in early May – suggested it may sell some of its bitcoin.

The most recent note comes from Toronto-based Digihost, which today said it sold off a portion of its mined bitcoin to help fund energy costs.