Bitcoin (BTC) added 5.6% in the past 24 hours to rise over $30,000 during Asian trading hours on Monday in a brief show of strength amid a record losing streak, data shows.

The asset has slid for nine straight weeks for the first time in its history, falling from the $48,160 level in late March to last week’s close of $29,600. The drop came alongside inflation concerns in the broader economy, a move away from risk assets, and systemic risk from within the crypto industry.

Price-charts suggest bitcoin saw strong support at the $29,000 mark, a level that has been tested several times in the past weeks. Closing below this level could mean that the cryptocurrency could drop to its 2017 high of nearly $20,000, charts show. Resistance at $30,500 continues to exist, however, and a daily close above that level would show strong signs of recovery.

Readings on the Relative Strength Index (RSI) – a tool used by traders to calculate the magnitude of an asset’s price move – have fallen to nearly 30, suggesting signs of bottoming out. Short-term buyers could add to this week’s momentum. Sentiment data from last week already suggests the market may be headed for higher prices in the coming weeks. 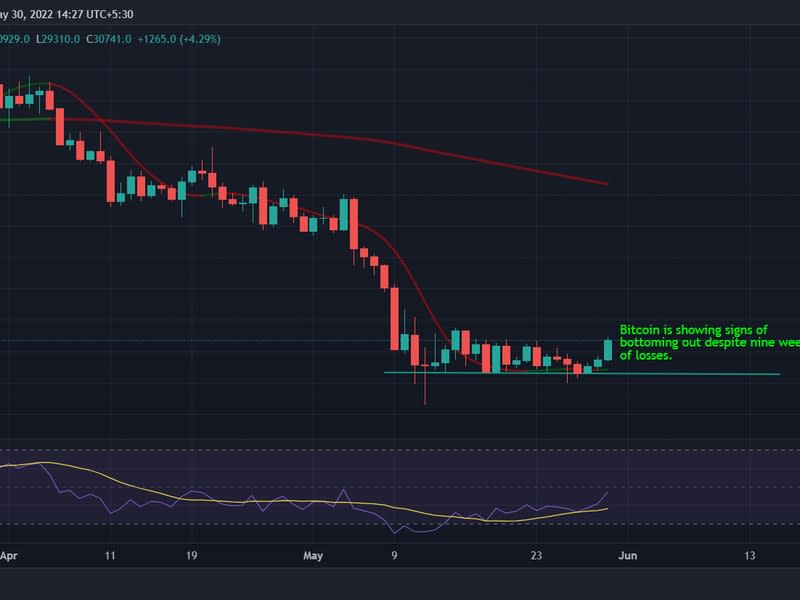 Bitcoin is showing signs of bottoming out despite nine weeks of losses. (TradingView)

Some analysts have said that investors would continue to assess price-action before deploying capital.

“U.S. markets saw a modest revival last week with stocks rising across the board,” Simon Peters, market analyst at eToro, said in an email. “Although crypto didn’t see quite the same revival, prices have now been holding steady in major cryptos such as bitcoin, suggesting a ‘calm’ of sorts before any fresh commitment to the market is made by large players.”

Monday’s run comes on the back of a bump in Asian equities amid reports that major Chinese cities have started to ease coronavirus restrictions after months of strict lockdowns. Traders laid bets that the reopening the economy could spark an increase in consumer spending – which could increase company revenues in the coming weeks and could indicate a bottom for stocks in the region.

However, some analysts say a recovery in bitcoin could take longer than expected.

“It will be premature to talk about a bullish counteroffensive until bitcoin gets above $30,600, its horizontal resistance line since mid-May,” explained Alex Kuptsikevich, FxPro senior market analyst. “Renewed risk appetite in global markets is fuelling hopes of a turnaround.”

“Divergence in equity and cryptocurrency dynamics was conspicuous last week, highlighting the weakness of the crypto market,” Kuptsikevich cautioned.