Bitcoin (BTC) continues to gain ground amid unconfirmed reports suggesting that a foundation focused on UST, the world’s fourth-largest stablecoin, is accumulating the top cryptocurrency as a reserve asset.

CoinDesk data shows that bitcoin tapped three-week highs of over $44,000 early Friday. The cryptocurrency has rallied more than 10% since the U.S. Federal Reserve (Fed) raised borrowing costs by 25 basis points on March 16.

The rumor mill is that Singapore-based nonprofit Luna Foundation Guard (LFG) purchased bitcoin worth $125 million (2,840 BTC at the current price) early this week, delivering on its month-old promise to add BTC as an additional layer of security for UST – Terra’s decentralized dollar-pegged stablecoin.

Stablecoin tether (USDT) worth $125 million was recently moved from a Gnosis safe address allegedly owned by Terra, perhaps evidence of the purchase, as CoinDesk’s Christine Lee noted on Thursday.

According to Anthony Pompliano, the popular crypto evangelist and partner at Morgan Creek Digital, the foundation has become a persistent bitcoin buyer. “They are slowly purchasing $3 billion of bitcoin from the Luna Foundation reserves. This is being done via aggressive buying on price dips,” Pompliano noted in blog post published on Monday.

According to pseudonymous market expert and Anchor Protocol user Duo Nine, who operates the Twitter handle @DU09BTC, LFG has accumulated 18,000 bitcoin worth over $800 million.

The official confirmation of the said purchases is still awaited. The foundation announced the decision to build a $1 billion bitcoin reserve last month. Do Kwon, founder and CEO of Terraform Labs, recently said that the foundation has plans to increase its reserves to $3 billion, with a long-term goal of raising a $10 billion fund.

While the jury remains out on the size of the foundation’s recent purchases, the speculation, along with the post-Fed rally in equities, appears to be boding well for bitcoin.

“[There is] decent bid in crypto markets driven by excitement over institutional participation, building ETH merge narrative, and (unconfirmed) a $125 million BTC purchase by Luna Foundation Guard,” Ilan Solot, a partner at the Tagus Capital Multi-Strategy Fund, said in an email early this week.

Analysts remain confident of the near-term prospects. “We are at the upper band of resistance currently as BTC approached 2022 highs. With the spot flow we have been seeing, we are cautiously optimistic that there will be a continuation of the medium-term uptrend and a run to $50,000,” Matthew Dibb, chief operating officer and co-founder of Stack Funds, said.

Data tracked by Glassnode shows the number of coins held on centralized exchanges has dropped to 2,506,635 BTC, the lowest since September 2018. More than 7,000 coins have left exchanges in less than a week, offering bullish cues to the market.

Bitcoin was recently trading near $44,190, representing a 1% gain on the day. 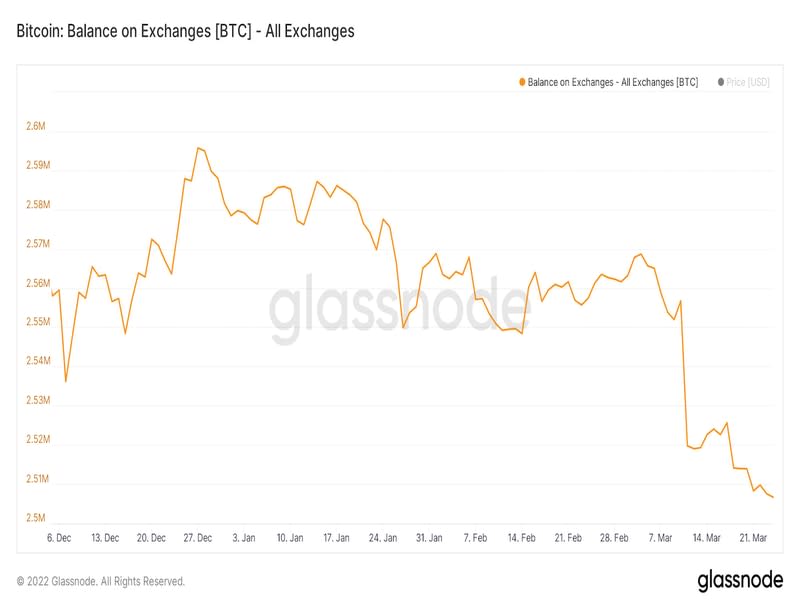