The Federal Reserve has made clear it wants to raise interest rates to lower inflation without triggering large-scale job losses.

But a rally in the bond market this week shows investors doubting the Fed’s ability to thread this needle.

Friday’s trading session extended a week of falling yields as investors snatched up bonds; yields on the U.S. 2-year and 5-year Treasuries both finished the week roughly 0.30% lower than they ended the prior week.

As part of its fight to tame inflation, the Fed recently telegraphed plans to raise short-term interest rates to roughly 3.4% by the end of this year — more than double the current setting of about 1.6%. The Fed then expects to raise interest rates further in 2023, to about 3.8%.

Gaske said markets implied the Fed could only lift rates to 3.4% before having to cut interest rates by next year. ING Economics similarly wrote this week they now expect rate cuts in the second half of 2023.

As the Fed moved toward a more aggressive 0.75% move in its June meeting, the yield on the U.S. 10-year Treasury —seen as a proxy for longer-term interest rates — rocketed to a post-pandemic high of 3.48%. Since then, the picture has shifted dramatically as Fed commentary and other economic data pointed to more pronounced recession fears.

On Wednesday, Fed Chairman Jerome Powell admitted that there is “no guarantee” that the central bank can avoid a hard recession, introducing market fears that the Fed may not follow through on its plans to raise rates to 3.8%.

Forecasts from the Federal Reserve Bank of Atlanta this week also suggested that the U.S. economy would have likely shrank for two quarters in a row, which some consider to be the definition of a recession.

On Thursday, the Atlanta Fed’s GDPNow model projected that GDP contracted by 1.0% on an annualized basis in the second quarter; this forecast was revised to a contraction of 2.1% on Friday. The official read on second quarter GDP is due July 28. 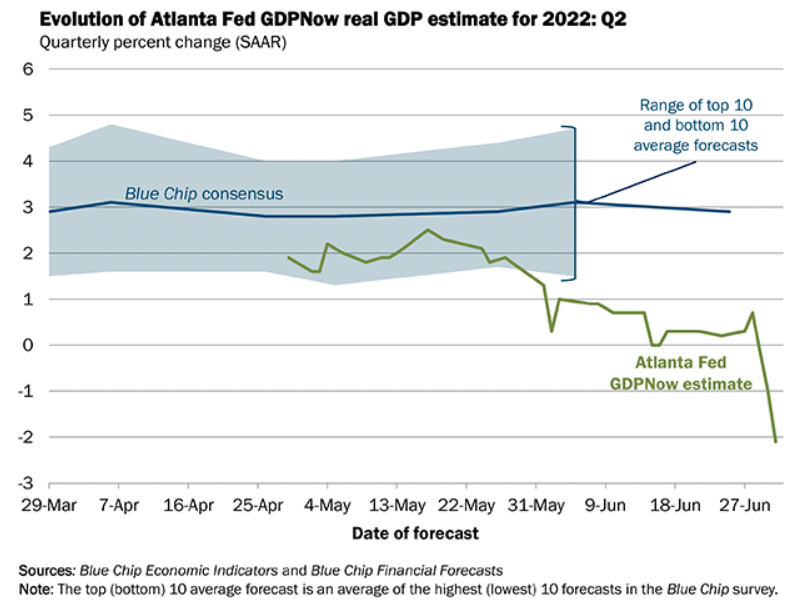 Powell has messaged that policymakers later this month will likely be debating a 0.50% or 0.75% rate hike as the central bank marches closer to estimates of when short-term borrowing costs will be restrictive enough to tame inflation.

Fed officials have been mixed on that debate. Cleveland Fed President Loretta Mester told CNBC earlier in the week that based on current data, she would support a 0.75% increase. But Philadelphia Fed President Patrick Harker told Yahoo Finance June 22 that if the Fed saw household and business demand “soften,” he could support a 0.50% increase.

The key will likely be inflation data, where cooling price increases may suggest a softening of demand — which Fed officials would like to see. Government data covering the month of May showed the year-over-year pace of price increases plateauing between April and May.

“Inflation can’t go down until it flattens out, and that’s what we’re looking to see,” Powell said June 15.

The next meeting is scheduled for July 26 and 27.

Brian Cheung is a reporter covering the Fed, economics, and banking for Yahoo Finance. You can follow him on Twitter @bcheungz.