Ping An Insurance Group‘s unorthodox activist campaign to force HSBC to spin off its Asian business appears to have gained little traction with investors as it remained at an impasse three months after it began.

No major shareholder has publicly supported HSBC’s break-up since the bank’s biggest investor declared its hand in a surprise move in late April before the London-based bank’s annual general meeting. Analysts have subsequently expressed their scepticism about the potential value that could be unlocked, given the likely complexity and time needed to split one of the world’s largest banks, forged through more than a century of mergers that spanned the globe.

HSBC’s stock price, a key gauge of its major shareholder’s ire, remains stuck in neutral, as investors grapple with how they should place their bets after the Shenzhen-based insurer – owning 9.2 per cent of HSBC- called publicly for the biggest of Hong Kong’s three currency-issuing banks to be shaken up.

Do you have questions about the biggest topics and trends from around the world? Get the answers with SCMP Knowledge, our new platform of curated content with explainers, FAQs, analyses and infographics brought to you by our award-winning team.

Many investors are standing back and waiting for Ping An to show them what they may be missing, said Hugh Young, the Asia chairman of Abrdn, which owned 1.3 per cent of HSBC as of March 31. “We don’t quite see the logic, [so] let’s wait and see what they come up with,” Young said. “We’re very much in the ‘remain to be convinced’ camp, which looks the same as the markets.”

Investors would like to better understand Ping An’s rationale and would be willing to support changes if it made sense for the company and shareholders, Young said.

“If we’re missing something, it would be useful,” Young said. “Like most investors, we’re open-minded about these things.” 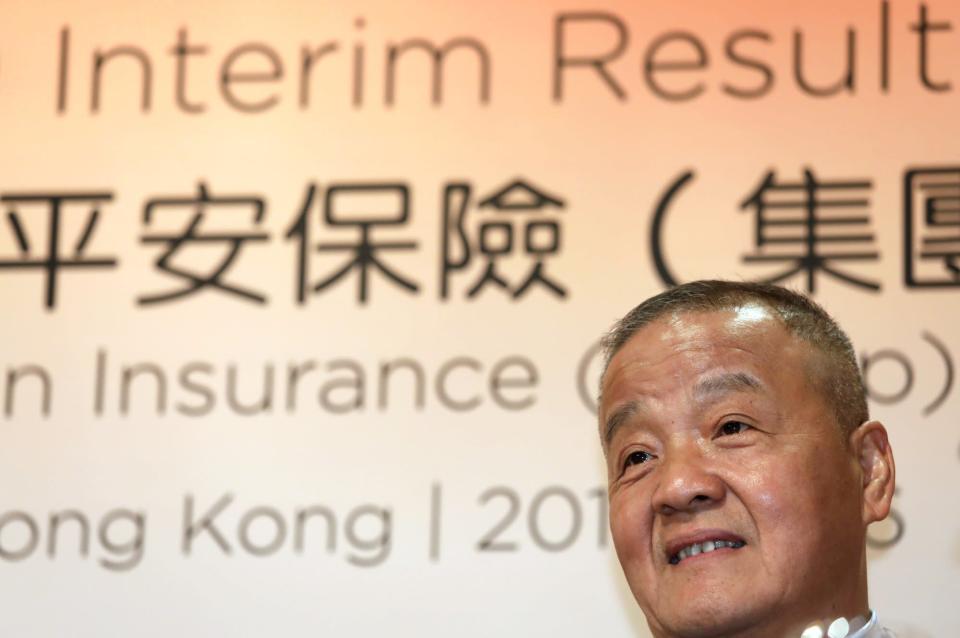 Ping An, China’s biggest insurer, said publicly that it wanted to encourage a “debate about the future of the bank”, but privately has advocated for HSBC to examine a potential spin-off of part, or all, of its Asian business to unlock shareholder value.

The insurer is still seething from HSBC’s 2020 decision to comply with a demand by the UK’s financial regulator to cancel its dividend, according to people familiar with Ping An’s thinking.

The cancellation of the final dividend of 21 cents a share for 2019 and suspension of dividends for most of 2020 translated to roughly US$937 million in foregone income for Ping An, an estimate based on its stake of 1.64 billion shares and HSBC’s average payout over the prior five years.

“Ping An supports all reforms and proposals from investors that can help HSBC’s operations and long-term growth,” a Ping An spokesperson said. HSBC declined to comment. 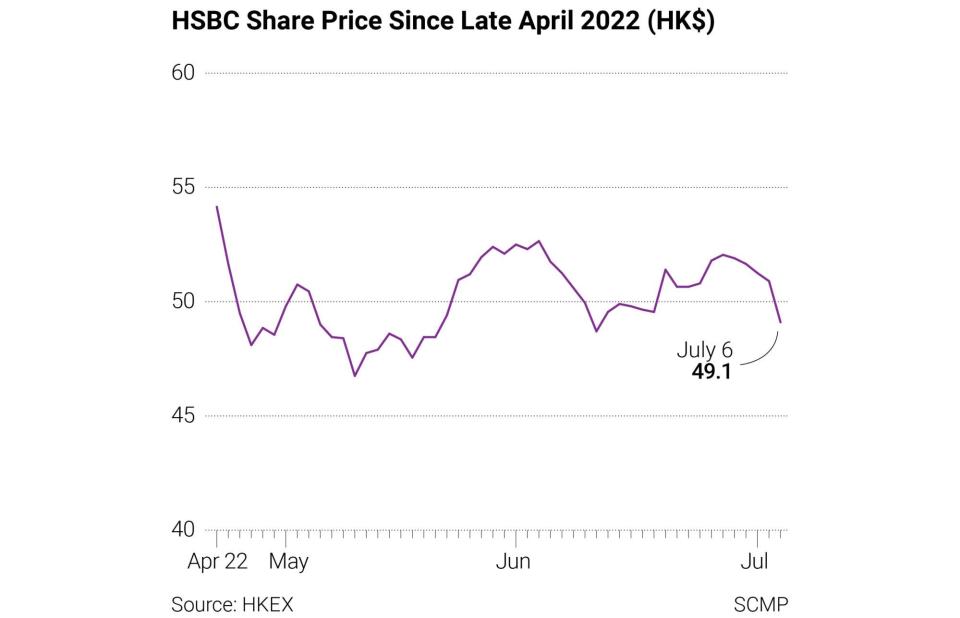 Despite Ping An’s push, HSBC’s shares in Hong Kong have declined more than 9 per cent since April 22, the last trading day before The Sunday Times reported that an anonymous investor was pushing for a potential break-up of the bank.

By comparison, the benchmark Hang Seng Index, of which HSBC is the second-biggest stock with a 8.22 per cent weighting, rose 4.6 per cent during that period. Ahead of the campaign, HSBC was one of the best performing bank stocks globally and outpaced the Hang Seng Index.

The bank’s shares in London have performed better, declining about 1 per cent during that period. However, the London-based lender has been outpaced by rivals Barclays and Standard Chartered in London in that period.

The idea of splitting HSBC in two had been popular among some Hong Kong shareholders in recent years, particularly as the bank has found itself caught in the middle of souring relations between China and the United States, and after the dividend cancellation two years ago. 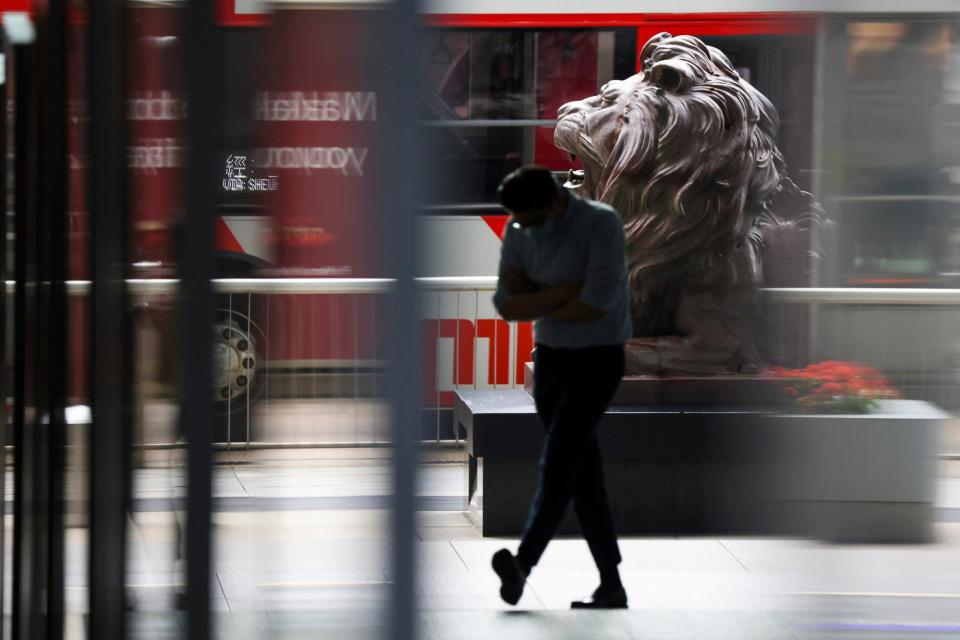 However, no major investor has publicly supported the break-up since Ping An’s campaign began. More than a half-dozen major shareholders contacted by South China Morning Post declined to comment on Ping An’s push, citing policies of not discussing individual holdings.

Whether HSBC’s management and Ping An can reach a compromise will depend on the bank’s financial performance, according to Kenny Wen, head of investment strategy of Hong Kong-based broker KGI Asia.

“If HSBC’s results are good, and the share price enjoys a better valuation, I guess minority shareholders would have fewer complaints about the existing company structure,” Wen said. “If HSBC’s performance is a laggard of other major Hong Kong or Asian banks, the spin-off pressure will keep growing.” 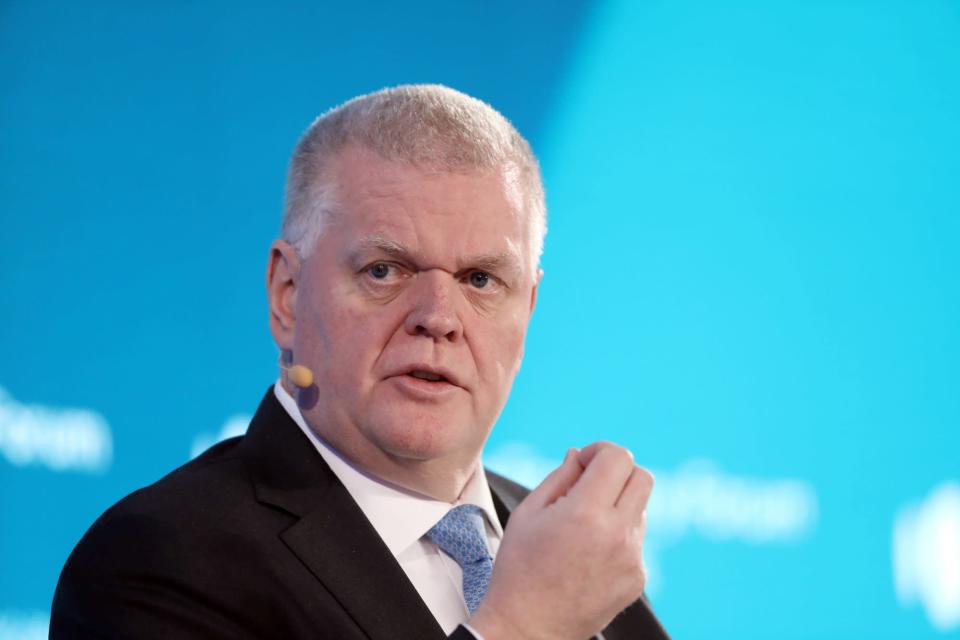 The timing and approach by Ping An has reflected a much more low-key approach than is typically seen in sharp-elbowed activist campaigns.

Ping An has not engaged a bank as its outside adviser, as is normally the practice when activist investors agitate for change – choosing instead to conduct much of its outreach through anonymously sourced reports in the British press.

It has not pushed for an extraordinary general meeting to consider a break-up – it can call for one, with its 9.2 per cent stake – and has not requested a seat on HSBC’s 13-member board, again going against the playbook by most activist investors seeking strategic changes.

The insurer also did not make a shareholder proposal at HSBC’s annual meeting, with Bloomberg reporting in June that Ping An missed a deadline to lodge a protest vote with its shares at the April 29 meeting. 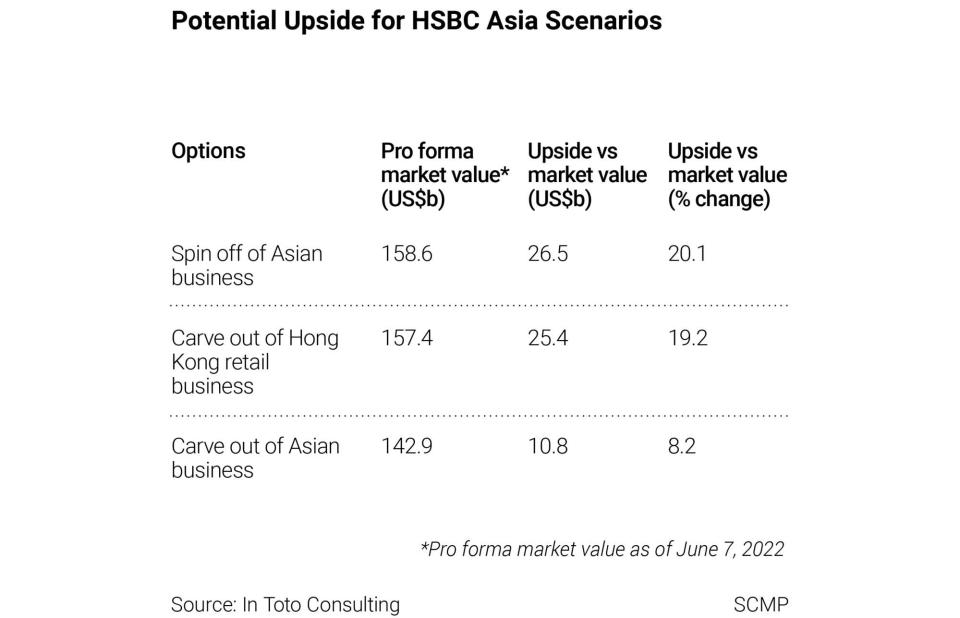 “From a corporate governance point of view, HSBC should quickly dissolve its differences with its major shareholder Ping An,” said Clement Chan, managing director of assurance at the accounting firm BDO. “A prolonged dispute between the management of the bank and its major shareholder would create a lot of uncertainties for its share price.”

Ping An has made very few public comments on the matter – only publicly confirming its identity almost a week after reports emerged that an anonymous shareholder was pressing for a break-up.

The insurer had also sent out mixed signals, at times distancing itself from the push for break-up, saying instead it supports a “discussion about the bank’s future,” calling on other shareholders to propose solutions. 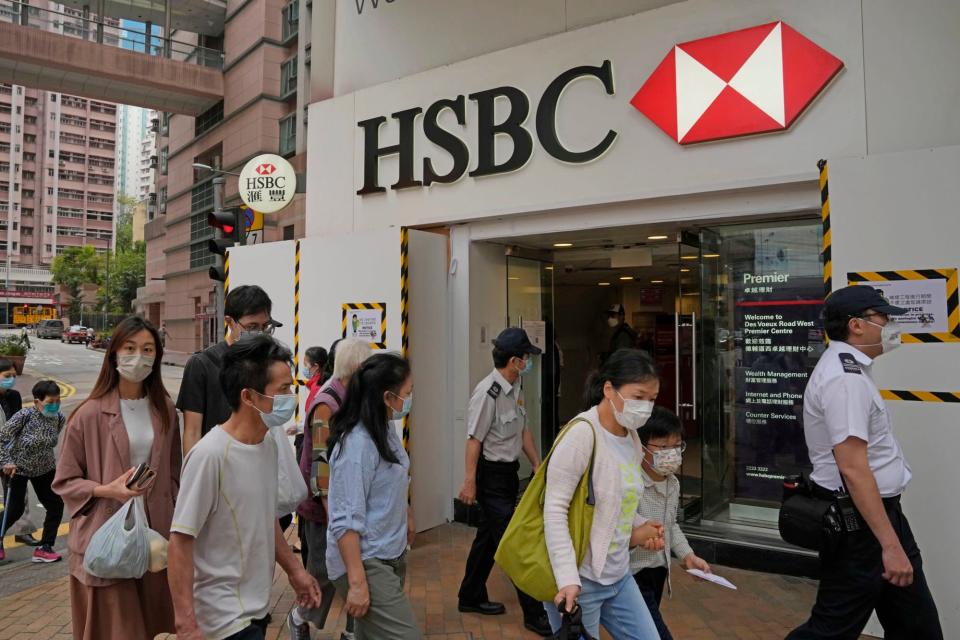 That is in sharp contrast with the public fights mounted by some of the world’s best-known activist funds, who often announce their intentions widely and loudly with a high-profile broadside in an open letter or PowerPoint presentation to investors.

The closest this campaign came to was a research report last month by In Toto Consulting, a Hong Kong due diligence adviser, which calculated that HSBC could unlock US$26.5 billion in value by spinning off its Asian business. The analysis, which also examined potential carve outs of the Asian business or the Hong Kong retail business, may not capture “temporary or technical impacts to the business or market sentiment”, the report said.

Ping An declined to comment on whether it commissioned the report, but a person familiar with the insurer’s thinking said Ping An wants the market to debate possible ways to restructure HSBC’s Asian business to increase returns for shareholders.

In Toto, which was started by former CLSA analyst Asheefa Sarangi two years ago, said it was engaged by a “third party” and has declined to reveal its client’s identity.

Analysts who follow the bank closely questioned whether a spin-off could actually generate that much value.

It is difficult to see how a spin-off of the Asian business could increase HSBC’s value by 42 per cent, since about a third of the bank’s value is in the publicly traded Hang Seng Bank, according to a research note last month by Edward Firth, analyst at Keefe, Bruyette and Woods.

To reach In Toto’s US$19 billion estimate, the HSBC Hong Kong spin-off would need to be valued well above its competitors, Firth said.

“Whilst on paper, Ping An’s proposal could look interesting and could put a listed HSBC Hong Kong entity on higher multiples, it is far from obvious that it would work in practice,” BNP Paribas’ analyst Guy Stebbings wrote in June. “In practice, a break-up of HSBC would probably be lengthy, expensive, and disruptive to revenues.” 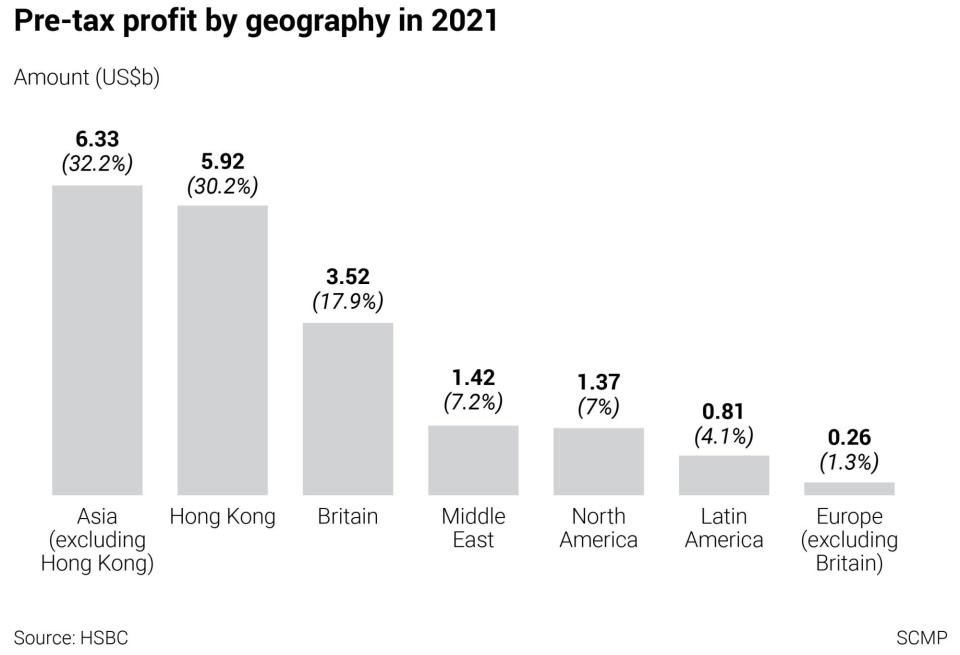 Some analysts, including Stebbings, also have suggested that Ping An, which counts the Chinese government among its investors, but is not state-owned, might be more interested in reducing the future risk in its portfolio from tensions between Beijing and Western governments.

The activist push also comes at a time when HSBC is expected to benefit from rising global interest rates after years of historic lows, which has been reflected in greater investor confidence in its share price in recent months despite fears over higher inflation in Western markets.

“We should expect a PR war between HSBC and Ping An to persist for the foreseeable future,” Mediobanca said in a research note. “However, while this simmers in the background, the recent uptick in [Hong Kong Interbank Offered Rate] Hibor is … the more relevant driver of prospective value creation for HSBC shareholders.”

Activist investor campaigns are a rarity in Asia and have a mixed bag of success as foreign investors experienced difficulty convincing family-owned conglomerates or state-backed companies to make significant changes.

For example, billionaire Paul Singer’s Elliott Management waged a five-year legal battle with Bank of East Asia (BEA) until the Hong Kong lender agreed to a strategic review in 2020.

The 104-year-old bank, which is run by the Li family, agreed to sell its life insurance business last year to Hong Kong’s biggest publicly traded life insurer AIA Group Limited following the review. Elliott has since closed its offices across Asia and is managing its investments in the region from London.

As it defends its strategy, HSBC hired Goldman Sachs and the boutique investment bank Robey Warshaw to see if there is additional value to unlock, without recommending a break-up, according to people familiar with the matter.

Despite facing geopolitical pressures in recent years as relations have soured between China and Western governments, bank executives have argued that HSBC’s international footprint and its history of helping multinational companies between regions remains its strength.

Executives in HSBC’s ring-fenced retail and commercial bank in the United Kingdom recently highlighted to analysts the value of the bank’s global presence, noting the biggest region for outbound investment by its customers in Britain is Asia.

“We’ve done a lot of work on this,” HSBC’s UK chief executive Ian Stuart said at an analyst presentation in June. “It doesn’t matter how we cut it. We can’t see the value. I personally cannot see it. It’s worth so much to us, it would be very painful for us. There are things we can do, but it’s best if we stick together.”