Fast-food fans like new menu items — the more unique the better it often seems. They also want strong value for their money, though how people perceive value can be really different depending upon the chain being visited.

A Chipotle (CMG) – Get Chipotle Mexican Grill Inc. Report fan might see value in their meal even if costs twice as a much as what a burger chain might charge while a McDonald’s (MCD) – Get McDonald’s Corporation Report, Wendy’s (WEN) – Get Wendy’s Company (The) Report, or Burger King supporter may only see value in bundle deals and dollar menus.

Lastly, the reason it’s called fast food (or quick serve) is because people eating at one of these chains wants to get their food quickly. McDonald’s, Wendy’s, and Burger King, want to make that happen as well. Serving customers quickly keeps them happy, keeps the line moving, and allows the chain to sell more food.

Speed, however, has always been dependent upon some human factors. You can optimize your kitchen, train your staff, and simplify your menu, but a fast-food chain can’t speed up a customer who wants to spend three minutes pondering the answer to “would you like fries with that?”

That’s at least partly why all the major fast-food chains, led by McDonald’s (which borrowed an awful lot from industry leader Starbucks (SBUX) – Get Starbucks Corporation Report), have invested heavily in their apps. When a customer downloads a chain’s app and uses it to order, the clock doesn’t start ticking until the user hits the pay and send button.

Apps also allow fast-food chains to deliver an ordering process that allows for endless customization and procrastination. When it works (and it usually does) this delivers a better customer experience while also giving the chain access to data and the ability to use their app to market to their customers. 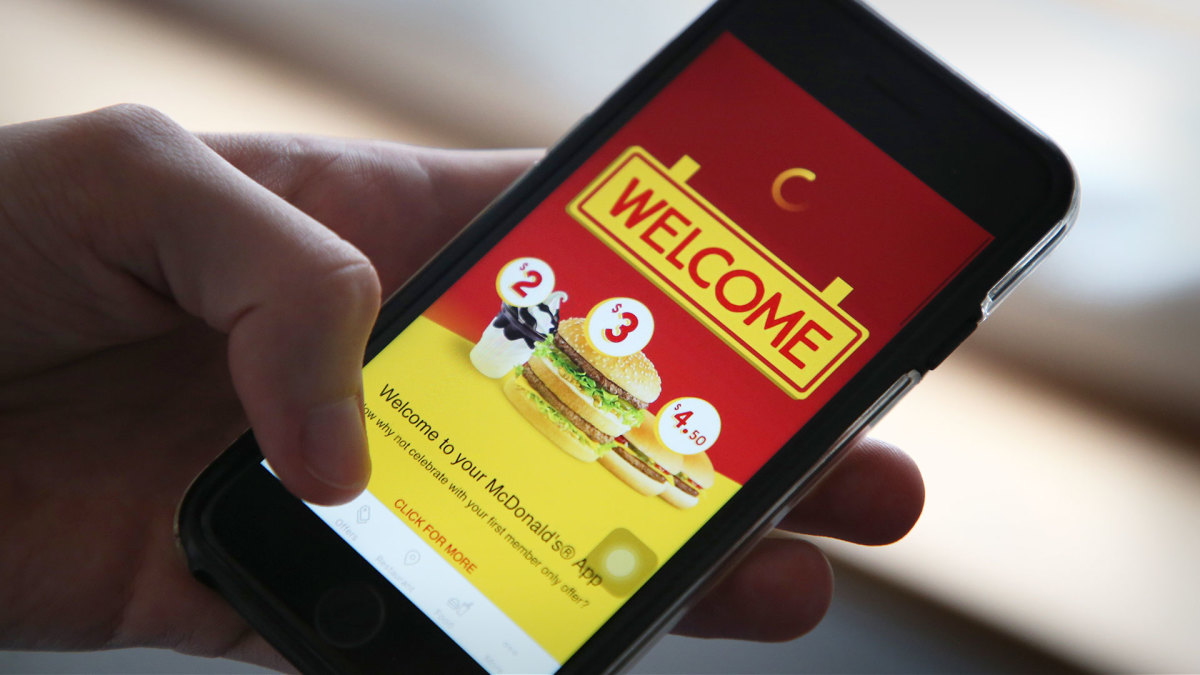 McDonald’s opted to invest in app-based ordering, alongside its adding in-store tablets for orderings as part of its revamp of most of its restaurants. That was a move that the chain’s franchisees were not thrilled with due to the cost, but adding digital ordering options has been a huge success, according to CEO Chris Kempczinski’s comments during McDonald’s first-quarter earnings call.

McDonald’s has been using its loyalty program to drive people to download its app.

“One of the biggest drivers of our digital adoption is our global loyalty program MyMcDonald’s Rewards. It’s helping us better meet our customers’ needs as we build more authentic and personal relationships. Coming into this year, we had introduced MyMcDonald’s Rewards in over 40 markets, including France, the U.S., Germany and Canada. Australia just launched in March, and the U.K. will go live later this year,” he added.

The fast-food giant has over 26 million Rewards members in the U.S. alone only nine months into the program. That’s very important because membership creates an enhanced relationship between the customer and the chain.

“We’re also seeing more frequent visits from loyalty customers, many of whom were very loyal to begin with,” the CEO said. “Some of our largest markets have seen record customer visit frequency driven by loyalty usage coupled with app exclusive promotions.”

Wendy’s and Burger King Want You

McDonald’s has a rather larger first-mover advantage. There may be a limit to how many apps people are willing to download, register for, and then engage with. At the very least, it may take more to get a customer to download an app and register for a loyalty program for chains they don’t visit all that frequently.

Burger King and Wendy’s have a clear strategy to get customers onboard. They’re both willing to give you free food and keep giving you free food (likely to really train you to use the app).

The offers vary but Wendy’s currently gives new members a free 10-piece chicken nugget, while Burger King offers a free Whopper, Croissan’wich, or Original Chicken Sandwich on your first digital order. And, once you sign up, the offers keep coming along with the points you earn.

Both chains have committed to making being a member a strong value, likely to entice customers to not just join but stay members. No matter the reason, the three big burger chains are willing to give you free food to not just join their app but use it. That’s a strong consumer benefit at a time when many people are watching their wallets.

Grab the year’s best BOGO offer while you can. TODAY ONLY, sign up for TheStreet Smarts and get two years of curated investing advice for the price of one.