How bad is the mood out there right now? Try max bearish.

So said Bank of America’s latest fund manager survey on Tuesday that showed expectations for profits and growth at recessionary levels. Yet Wall Street rallied partly on earnings optimism but also as some see all this gloom as a contrarian buying signal. Wednesday’s action is looking a bit more choppy.

After all, what if peak inflation and peak rate increases are just around the corner?

It isn’t unimaginable that investors are overwhelmed right now, as they try to gauge whether central banks will tip economies into recession in a battle to control inflation. That’s not to mention the potential spillover from an economic downturn into corporate earnings.

Our call of the day from Bernstein analysts Mark Diver and Sarah McCarthy says investors are facing a short-term-pain-for-long-term-gain moment for stocks.

The divergence between those two suggests strong returns are possible for investors from current levels over a period of a year or more, but further downside in the short term before a tactical capitulation level is reached, said Diver and McCarthy.

On that note, they are not in line with the thinking of the BofA survey that indicates more of investors just giving up.

Bernstein explained that their short-term sentiment indicator (4-week) remains neutral, with no signs yet of outflow capitulation from equity funds, except for Europe, where that has just begun. Their longer-term indicator, meanwhile, is showing extreme pessimistic levels, suggesting upside on the 12-months plus view.

“Our cross border equity flow indicator is signaling extreme pessimism, at levels only seen four times since 1987 and which were followed by strong returns over the following 12 months,” they said. 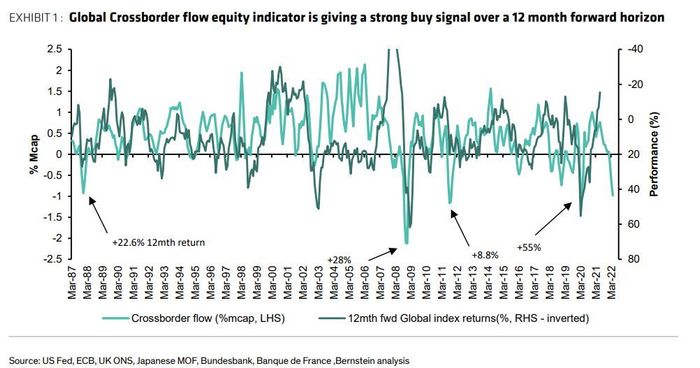 Those four moments in time were December 1987, with stocks returning 22.6% a year later, October 2008 and a 28.6% return, October 2011 and an +8.8% return, and March 2020, with a 55.2% return. The Bernstein analysts said they aren’t forecasting those types of returns, but that longer-term sentiment support should underpin positive returns over that 12-month time horizon.

Another positive for the long-term picture. Global net issuance, based on buybacks and equity issuance, is showing record net demand for stocks from corporates, something that should provide further support for stocks.

Buybacks began to recover in 2021 after a 2020 collapse and are now surging, driven by resilient earnings and free cash flow generation, the analysts said.

Read: The news from this giant volcano suggests world economy getting worse — and the U.S. may be to blame

Netflix NFLX, +3.48% is higher, after the streaming-video group said it lost 970,000 subscribers, fewer than feared, and said it would add more in the current quarter. Also, Netflix’s new Wall Street crowd pleaser is free cash flow.

Tesla TSLA, +0.77% is the big earnings name to watch after Wednesday’s close, with expectations for a tough quarter. Biogen BIIB, -3.14% shares fell after a revenue miss, Abbott Labs ABT, -1.81% dropped despite an earnings beat , while disappointing results have also hit Baker Hughes BKR, -13.01%. CSX CSX, -0.77% and Alcoa AA, -1.38% are also reporting later.

Meta Platforms META, +1.92% is being sued by Meta.is, an installation-art company, which says the Facebook parent infringed on its trademark and ruined its business.

Existing-home sales for June are ahead.

Elsewhere, a day ahead of a European Central Bank meeting, Italian Prime Minister Mario Draghi has said he would stay at his post if he wins a confidence vote later Wednesday. 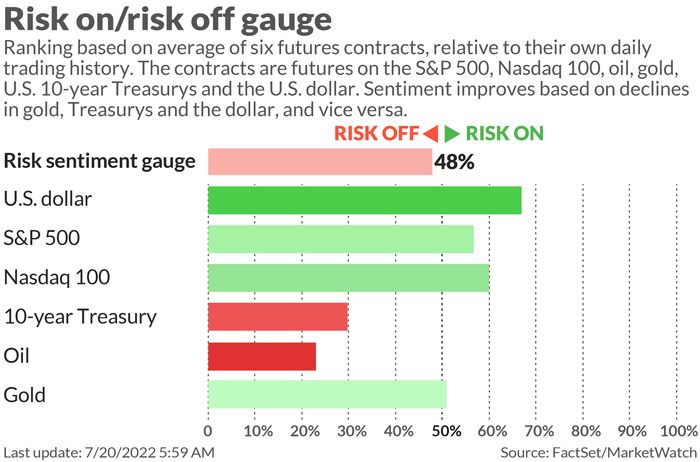 There were the top-traded tickers on MarketWatch as of 6 a.m. Eastern:

Cats and humans are going wild for the new videogame “Stray.”