The story for much of the year on Wall Street has been one of downward estimate revisions. A slowing economy, the very real possibility of a recession and consumers’ shrinking spending power in the face of rising inflation have all been reasons for lowering expectations.

And now another downward revision has been added to the increasingly long list – for Advanced Micro Devices (AMD).

However, near-term headwinds aside, Srivastava is extremely bullish on all things AMD. In fact, the current problems in the PC market can even be brushed aside, given the promising outlook elsewhere.

“We are hearing of continued momentum from our work around the industry, and see AMD’s server share continuing to expand,” the analyst said.

Much has been made of how AMD has managed to close the gap on its once far bigger rival Intel in the CPU market, while it has been astutely managed by CEO Lisa Su. Part of AMD’s success in recent years has resulted from the company taking advantage of Intel’s missteps. Indeed, Srivastava sees a path to “sustained share gains” against Intel but not because of more mistakes on Intel’s part.

“Our sense is that with the several key architectural innovations the company has made, along with rolling out a lineup of products that has enabled the company to not only close the gap but get ahead in many cases, AMD’s credibility with customers has continued to climb,” the 5-star analyst explained. “This should enable AMD to gain a larger share of the wallet, especially on the faster growing cloud data center TAM.”

Another enticing aspect concerns AMD’s valuation. Like others, AMD shares have not been spared in 2022’s brutal market – down 46% year-to-date. But this now offers a “favorable valuation and an attractive reward/risk profile.”

As such, based on the above, Srivastava raises his rating from Market Perform (i.e., Neutral) to Outperform (i.e., Buy) while the price target is also increased – from $100 to $115. Should the figure be met, investors are looking at 12-month upside of 48%. (To watch Srivastava’s track record, click here)

Srivastava is hardly the only analyst to come out bullish for AMD; the stock has a 19 to 8 split in favor of Buys reviews over Holds, giving it a Moderate Buy consensus rating. The shares are priced at $78.88 and their $130.65 average target suggests room for ~66% appreciation next year. (See AMD stock forecast on TipRanks) 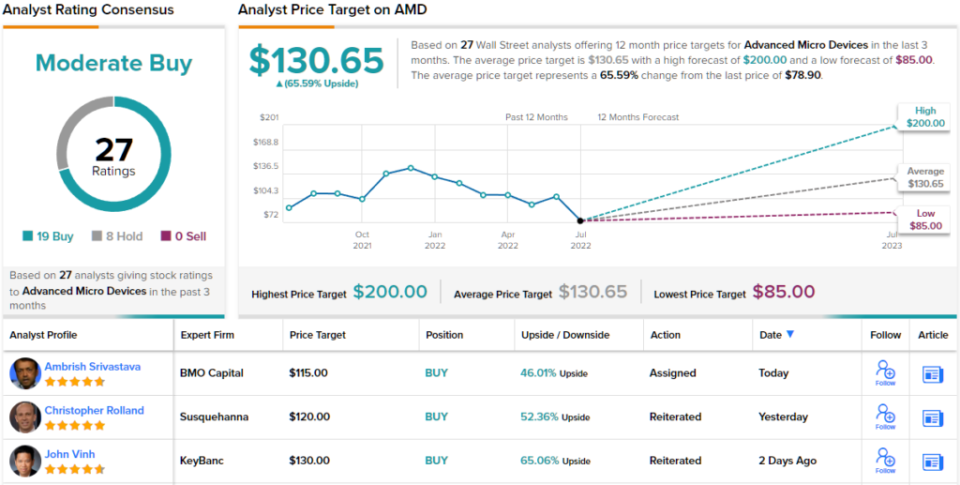