An unwind of the stock market’s best performing sectors had to happen eventually.

And that may be just what this bear market ordered, according to Jonathan Krinsky, chief market technician at BTIG.

“An unwind of the leadership groups was a necessary development, in our view, to make a more durable low. While we still don’t think this bear market has seen its ultimate low, the recent hit to ‘The Generals’ is likely enough for an end of quarter rebound,” said Krinsky. 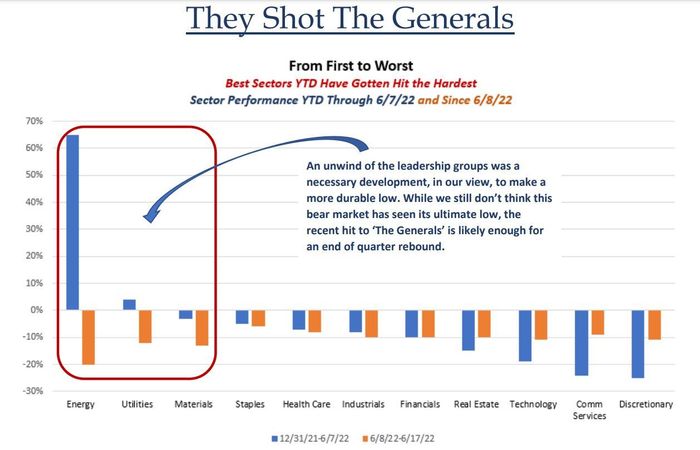 Last week marked the worst weekly return for the S&P 500 since March 2020, a move sparked by the biggest Federal Reserve interest-rate hike in a decade. The index is down 23.39% from its record close of 4,796.56 reached Jan. 3, 2022, meeting one technical definition of a bear market.

And if that end-quarter bounce comes, Krinsky expects defensives and energy will trail long-duration/growth stocks. Laggards such as tech heavy ARK Innovation ETF ARKK, +4.92%, Renaissance IPO IPO, +3.92%, which tracks the most liquid newly listed companies, and SPDR S&P Biotech ETF XBI, +5.69% did not make new lows, while the “generals” sold off, he said.

And: Why stock-market investors are ‘nervous’ that an earnings recession may be looming

Krinsky expects a sub 3,500 level on the S&P 500 before “a final capitulation event,” but he notes other factors that also point to an end of selling.

The percentage of Russell 3000 RUA, +0.40% companies above their 200 daily moving average dropped near single digits as energy and defensives got hit — a “necessary development to get to a bottom,” said Krinsky. 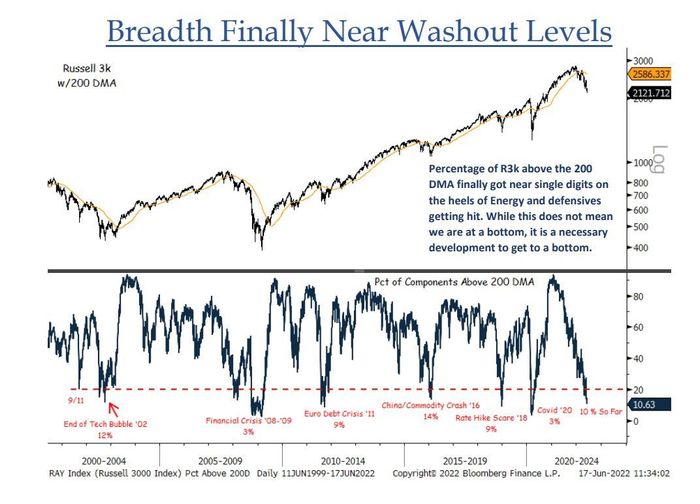 One thing standing in the way of a final washout, is the VIX VIX, -5.52%, otherwise known as the Cboe Volatility Index. And “the VIX curve never got close to inverting by 10 points which has marked every major bottom over the last 15 years,” he said.