The world’s largest bitcoin (BTC) spot exchange-traded fund lost half of its assets under management last Friday, which might have exacerbated bitcoin’s crash on Saturday.

The Purpose Bitcoin ETF saw an outflow of 24,510 bitcoins on Friday, the most severe redemption in a single day since the fund made its debut on the Canadian Stock Exchange in April 2021, according to the Norway-based Arcane Research.

The outflows mean that the fund had to sell about $500 million in BTC at Friday’s price, adding to the selling pressure in an already shaky crypto market, Arcane wrote in a report.

“The enormous outflows are likely caused by a forced seller in a huge liquidation,” Arcane analyst Vetle Lunde wrote. “The forced selling of the 24,000 BTC could have triggered BTC’s move down towards $17,600 this weekend.” 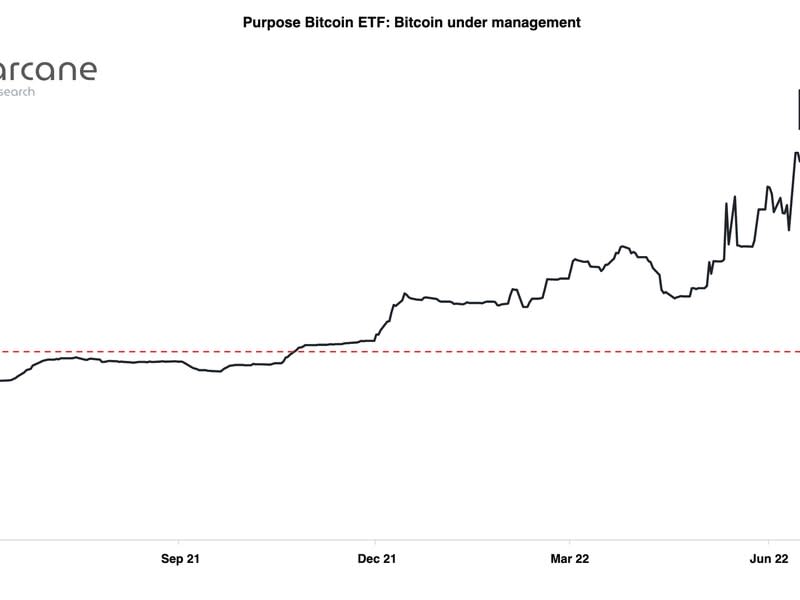 The Purpose Bitcoin ETF saw an outflow of 24,510 BTC last Friday, losing half of its assets under management in a day. (Arcane Research)

The weekend’s price action also marked the first time that the largest cryptocurrency had fallen below its previous cycle’s all-time high, notched in December 2017, of $19,783.

Bitcoin ETFs track the value of bitcoin and provide a way to invest in the largest cryptocurrency without dealing directly with crypto; they can be bought, sold and traded on traditional stock market exchanges instead of on cryptocurrency trading platforms. ETFs actively add and sell bitcoin to match investors investing in and redeeming from the fund.

The Purpose Bitcoin ETF was by far the largest bitcoin-focused exchange-traded product, managing almost 48,000 bitcoins before Friday’s redemptions. Now, the fund holds only about 23,300 BTC.

BITO saw its second-largest net inflows last week since its launch last October, leading the fund’s bitcoin exposure to grow by the equivalent of 4,115 BTC. Data shows that the fund manages $668 million in assets, equating to about 31,500 BTC.

The contrast suggests that “at least some U.S. investors are eyeballing the current sell-off in BTC as an attractive point of entry, taking advantage of forced sellers,” for a short-term relief rally, Lunde wrote in the Arcane Research report.

“Opinion amongst investors is extremely polarized, with some seeing this as a great buying opportunity, while others are spooked, liquidating positions,” James Butterfill, head of research at CoinShares, told CoinDesk in an email. “Fund flows are likely to remain mixed.”