The Federal Reserve’s almost $9 trillion portfolio is about to be reduced starting on Wednesday, in a process intended to supplement rate hikes and buttress the central bank’s fight against inflation.

While the precise impact of “quantitative tightening” in financial markets is still up for debate, analysts at the Wells Fargo Investment Institute and Capital Economics agree that it’s likely to produce another headwind for stocks. And that’s a dilemma for investors facing multiple risks to their portfolios at the moment, as government bonds sold off on Tuesday, and stocks nursed losses.

In a nutshell, “quantitative tightening” is the opposite of “quantitative easing”: It’s basically a way to reduce the money supply floating around in the economy and, some say, helps to augment rate hikes in a predictable manner — though, by how much remains unclear. And it may turn out to be anything but as dull as “watching paint dry,” as Janet Yellen described it when she was Fed chair in 2017 — the last time when the central bank initiated a similar process.

QT’s main impact is in the financial markets: It’s seen as likely to drive up real or inflation-adjusted yields, which in turn makes stocks somewhat less attractive. And it should put upward pressure on Treasury term premia, or the compensation investors need for bearing interest-rate risks over the life of a bond.

What’s more, quantitative tightening comes at a time when investors are already in a pretty foul mood: Optimism about the short-term direction of the stock market is below 20% for the fourth time in seven weeks, according to the results of a sentiment survey released Thursday by the American Association of Individual Investors. Meanwhile, President Joe Biden met with Fed Chairman Jerome Powell Tuesday afternoon to address inflation, the topic at the forefront of many investors’ minds.

Read: Biden pledges adherence to central-bank independence as he meets with Fed chief Powell and Biden’s meeting on inflation with Fed’s Powell seen as ‘good for the president politically’

“I don’t think we know the impacts of QT just yet, especially since we haven’t done this slimming down of the balance sheet much in history,” said Dan Eye, chief investment officer of Pittsburgh-based Fort Pitt Capital Group. ”But it’s a safe bet to say that it pulls liquidity out of the market, and it’s reasonable to think that as liquidity is pulled out, it affects multiples in valuations to some degree.”

Starting on Wednesday, the Fed will begin reducing its holdings of Treasury securities, agency debt, and agency mortgage-backed securities by a combined $47.5 billion per month for the first three months. After this, the total amount to be reduced goes up to $95 billion a month, with policy makers prepared to adjust their approach as the economy and financial markets evolve.

The reduction will occur as maturing securities roll off the Fed’s portfolio and proceeds are no longer reinvested. As of September, the rolloffs will be occurring at “a substantially faster and more aggressive” pace than the process which started in 2017, according to the Wells Fargo Investment Institute.

By the institute’s calculations, the Fed’s balance sheet could shrink by almost $1.5 trillion by the end of 2023, taking it down to around $7.5 trillion. And if QT continues as expected, “this $1.5 trillion reduction in the balance sheet could be equivalent to another 75 – 100 basis points of tightening,” at a time when the fed-funds rate is expected to be around 3.25% to 3.5%, the institute said in a note this month.

The target range of the fed-funds rate is currently between 0.75% and 1%. 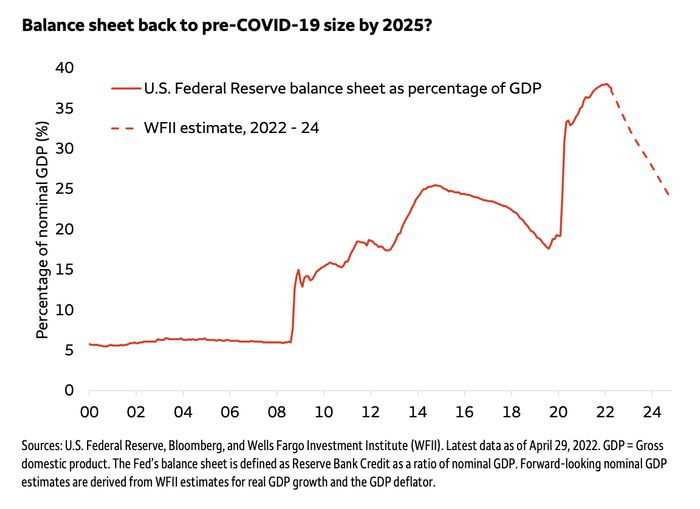 “Quantitative tightening may add to upward pressure on real yields,” the institute said. “Along with other forms of tightening in financial conditions, this represents a further headwind for risk assets.”

Andrew Hunter, a senior U.S. economist at Capital Economics, said that “we expect the Fed to reduce its asset holdings by more than $3 trillion over the next couple of years, enough to bring the balance sheet back in line with its prepandemic level as a share of GDP.” Though that shouldn’t have a major impact on the economy, the Fed might stop QT prematurely if economic conditions “sour,” he said.

“The main impact will come indirectly via the effects on financial conditions, with QT putting upward pressure on Treasury term premiums which, alongside a further slowdown in economic growth, will add to the headwinds facing the stock market,” Hunter said in a note. The key uncertainty is how long the Fed’s rundown will last, he said.

were lower. Meanwhile, Treasury yields were higher across the board, led by gains in the 10-year rate

as bonds sold off.