Ford (F) reported second quarter financial results after the bell on Wednesday easily topping estimates on both the top and bottom lines, and reaffirming its full-year profit guidance.

Ford shares were up 5% in after hours trading following the report’s release.

“We’re moving with purpose and speed into the most promising period for growth in Ford’s history – to innovate and deliver great products and connected services, raise quality and lower costs,” said CEO Jim Farley said in a statement. “We’re giving customers great experiences and value, improving our profitability and making Ford the next-generation transportation leader.”

Ford also reported $2.9 billion in operating cash flow and $3.6 billion in adjusted free cash flow, leading the board of directors today to issue a dividend of $0.15 a share for all outstanding stock.

In addition, Ford said starting next year it will operate and report financial results around its 3 core business units: 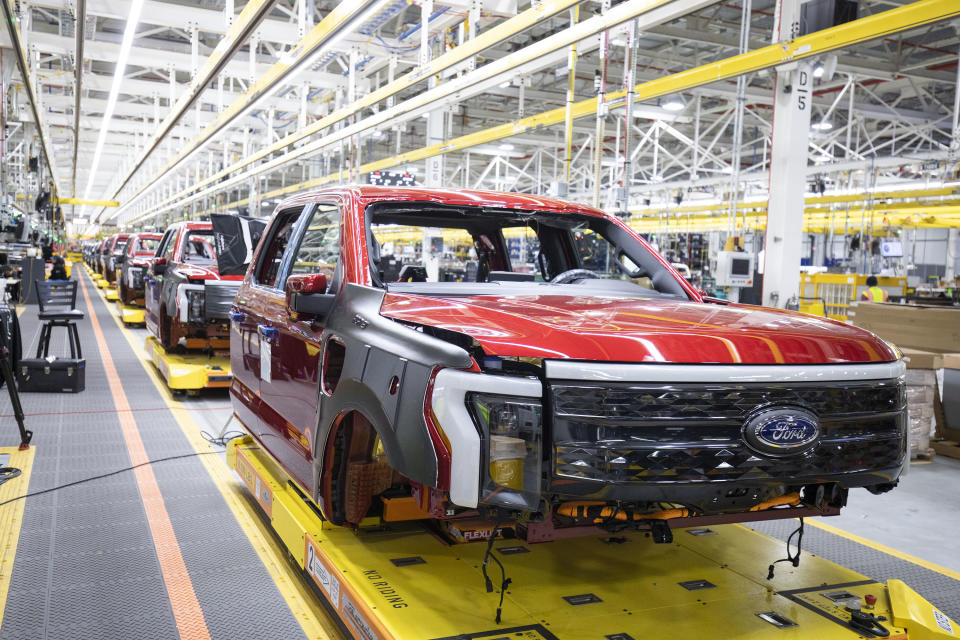 DEARBORN, MI – APRIL 26: Ford F-150 Lightning pickup trucks sit on the production line at the Ford Rouge Electric Vehicle Center on April 26, 2022 in Dearborn, Michigan. The F-150 Lightning is positioned to be the first full-size all-electric pickup truck to go on sale in the mainstream U.S. market. (Photo by Bill Pugliano/Getty Images)

It was not all good news for Ford however, as the automaker reported higher cost projections due to inflation. “Other inflationary pressures continuing to affect a broad range of costs – now expected to total about $3 billion for the year, up roughly $1 billion from what the company envisioned a quarter ago,” Ford said in its earnings statement

Ford’s Q2 revenue was little changed versus Q1, where it reported $34.5 billion in sales, but it jumped significantly when compared to a year ago when it reported only $24.13 billion, due to disruptions stemming from the global semiconductor shortage.

Ford previously said it sold 483,688 vehicles in the Q2, a slight increase versus a year ago. Ford noted that June was a strong month, with sales rebounding 31.5% for the month. Ford was an outlier in Q2 as most automakers reported sales decreases for the quarter. In addition, Ford said it sold 2,296 F-150 Lightning electric pickups since it went on sale in late May, with total EV sales in June hitting 4,353, a 76.6% rise versus a year ago. Ford’s electric portfolio includes the Mustang Mach-E, E-Transit van, and the F-150 Lightning.

Last week Ford reiterated that it was on track to build 600,000 EVs annually by 2023, as it detailed new partnerships with CATL and LG Energy for raw materials and battery production. Ford said it aims to increase its annual EV production capacity to 2 million vehicles by 2026, and that it has sourced 70% of the materials needed to reach that goal.