Jensen Investment Management follows a simple rule for initial screenings of stocks: Companies need to have achieved returns on equity (ROE) of at least 15% annually, for at least 10 consecutive years.

That’s a tall order, and it may provide comfort to investors during a period of market turmoil. The easier growth-oriented strategies of the bull market, driven in part by soaring stocks of companies that hadn’t achieved profitability, are no longer working.

Jensen’s main investment vehicle is the $9.1 billion Jensen Quality Growth Fund JENIX, +0.23%, which is rated five stars (the highest) by Morningstar. The Jensen Quality Value Fund is smaller, with $183 million in assets, and has a four-star rating. Jensen Investment Management is based in Lake Oswego, Ore., and has about $13 billion in assets under active management.

During an interview, Tyra Pratt, a co-manager of the Jensen Quality Value Fund JNVIX, +0.64%, discussed four of its holdings, including three in the consumer discretionary sector, which has been hard-hit this year.

Rob McIver, a managing director at Jensen who co-manages the Quality Growth Fund, was also on the call, explaining why the firm doesn’t invest in the energy sector.

That may seem to place the firm in a difficult position — after all, the S&P 500 energy sector has returned 50% this year. Then again, if we look back 10 years, the sector’s total return has been only 76%, compared with 243% for the full S&P 500 SPX, +0.22%. (All returns in this article include reinvested dividends.)

The reason Jensen avoids the energy sector is simple: Most companies in the sector cannot pass initial muster by consistently achieving ROE of 15%. During a year in which the price of West Texas crude oil CL.1, -6.05% has risen 53% through June 15, based on forward-month contract prices, energy companies are “incredibly cash-flow positive,” McIver said. But energy producers have a built-in disadvantage for long-term investors.

If a company meets Jensen’s initial screen, with minimum 15% ROE for 10 straight years, the firm’s portfolio managers will then subject it to a rigorous qualitative review. McIver said that a few years ago, when an energy company passed the initial screen, “what we were not comfortable with was the company produced a product they didn’t price themselves.”

The soaring profits for energy companies now follow “a long period of shareholder value destruction,” McIver said. “The forces of supply and demand outweigh the pricing opportunity for these businesses. The pricing is commoditized.”

Avoiding the energy sector now has curbed the performance of both funds this year, which Pratt called “a short-term hiccup” within a long-term investment strategy.

We might be at an early stage of a value cycle — marked by outperformance of companies that tend to trade lower to earnings and sales than growth stocks do. Value companies also tend to have more stable profits, which fits in well with Jensen’s initial screening methodology.

Here’s a simpler chart showing how the S&P 500 Value Index has outperformed the S&P 500 Growth Index and the full benchmark index so far this year: 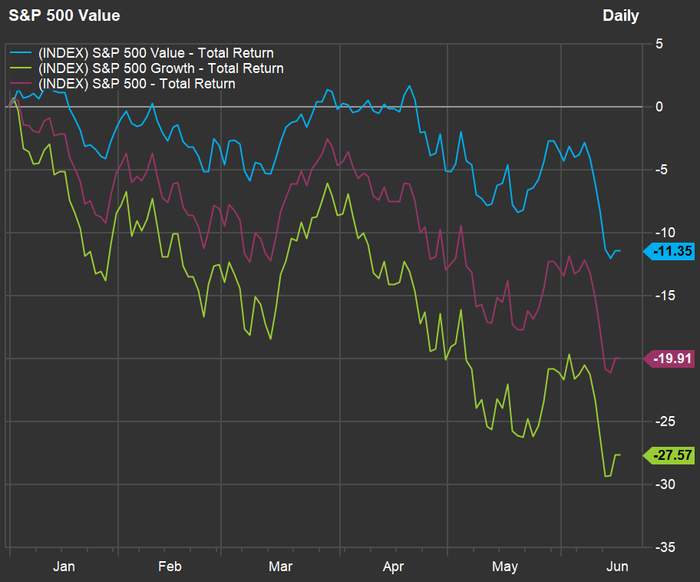 It remains to be seen whether the Federal Reserve’s efforts to lower inflation will result in a recession, but the reversal of pandemic-era central bank and fiscal stimulus has had quite an effect on stocks during 2022, making value strategies shine after years of underperformance during the bull market.

Pratt explained that the Jensen Quality Value Fund is mostly concentrated in mid-cap stocks, while the firm’s Quality Growth Fund is mainly in large-caps. The fund typically holds shares of 30 to 50 companies. 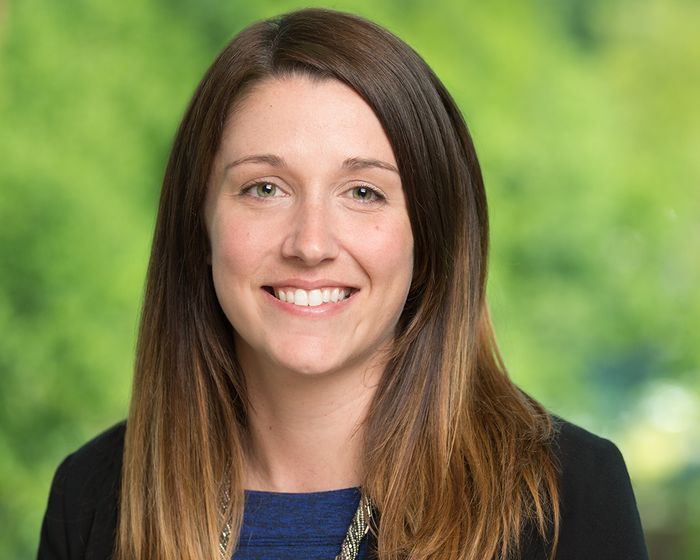 She described the consumer discretionary rout as “an opportunity” for Jensen to increase its holdings of “more durable” companies that have competitive advantages.

The table includes increases in rolling 12-month earnings-per-share estimates, which can be of interest because they can help drive share prices higher over time. They obviously haven’t done so this year, and Jensen follows a very long-term strategy. So far this year, the weighed aggregate rolling 12-month consensus EPS estimates for both sectors have declined 1%.

Here are comments from Pratt about the four companies: