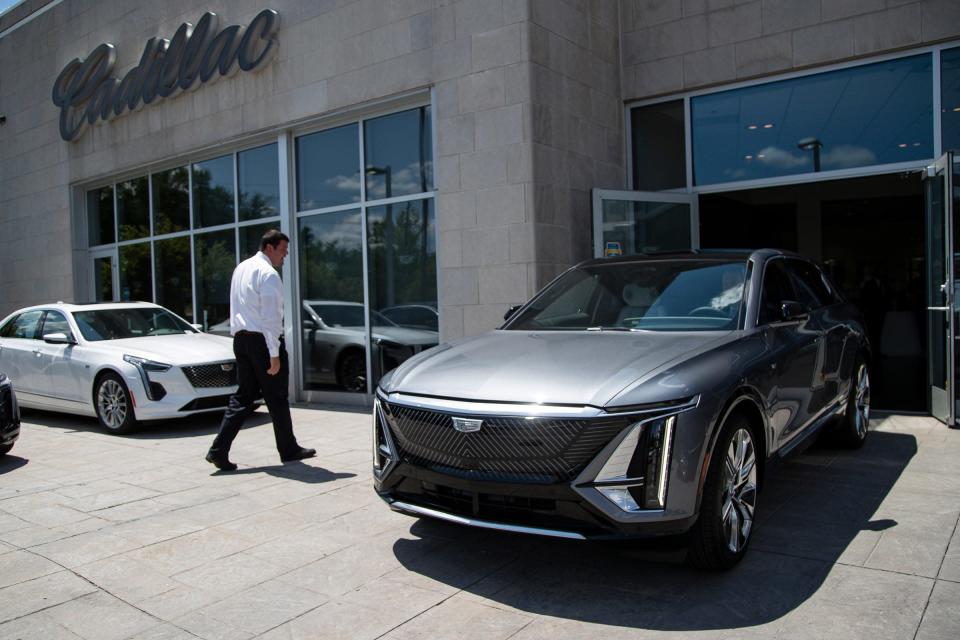 Cadillac of Novi in Michigan general manager Ed Pobur drives the Cadillac Lyriq out of the showroom after delivering it to the customer at the dealership on July 14, 2022.

DETROIT – In an unprecedented move by an automaker, General Motors is giving some customers a big discount on its new 2023 Cadillac Lyriq all-electric SUV in exchange for them signing a non-disclosure agreement on the vehicle and agreeing to let GM track how they use it.

The automaker gave the customers a $5,500 discount on the purchase or lease of the Lyriq, according to two sources familiar with the plan who did not have authority to speak on details of it. The select customers signed a non-disclosure agreement to keep mum about their experience of owning or driving one of the first Lyriqs with any parties outside of GM.

Cadillac spokesman Michael Albano confirmed the program, saying he believes GM is the first of any automaker to tap customers – versus employees – in real-time in their new cars so as to study their driving patterns and behavior.

“As we transform our business, the launch of our first all-electric vehicle, Lyriq, provides Cadillac some unique learning opportunities,” Albano told the Detroit Free Press, part of the USA TODAY Network. “Therefore, we have engaged a small group of early customers who agree to share their vehicle information and customer behaviors. Cadillac will use these learnings to elevate the experience for all our customers.”

Albano also said the importance of the Lyriq to Cadillac’s future as the brand transitions to all-electric by 2030 cannot be overstated. 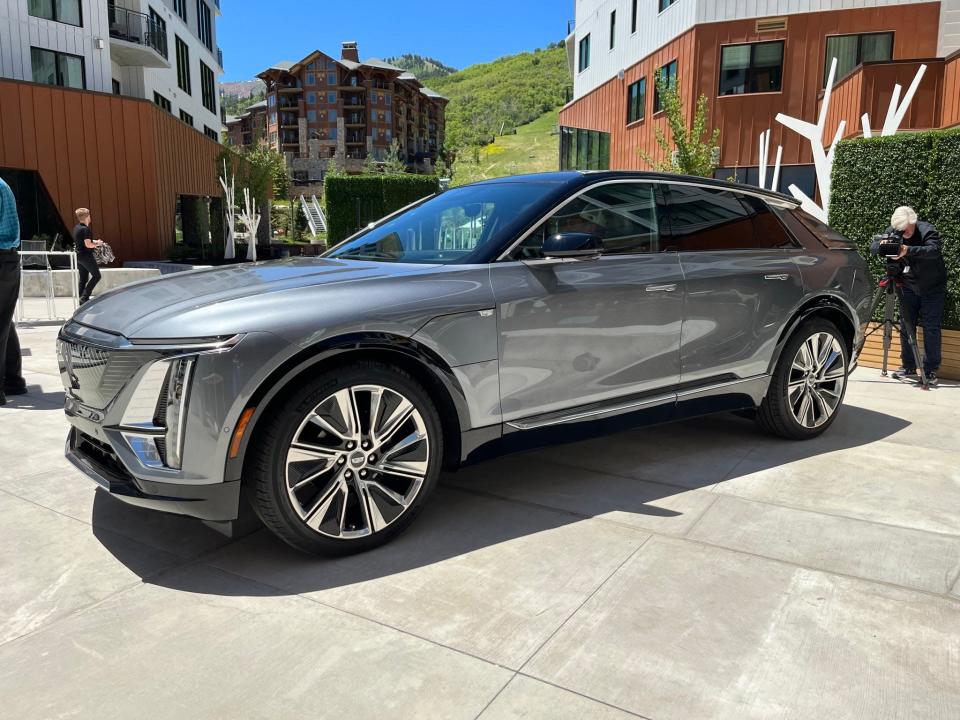 The 2023 Cadillac Lyriq is among the first electric luxury SUVs to go on sale.

The Lyriq, which is being built at GM’s Spring Hill Assembly plant in Tennessee, is one of GM’s first EVs to use the Ultium battery propulsion system that will underpin 29 other new EVs GM will bring to market in the next few years. The 2022 GMC Hummer pickup, which started rolling out late last year, also uses Ultium.

Last week, Cadillac of Novi in Michigan got the first production Lyriq in the world delivered to its showroom. The dealer sold the vehicle on Thursday to the customer who ordered it earlier in the year. Cadillac had sent out engineers to show the dealership’s technicians how to service the vehicle and it got extra prepping, the “white glove treatment,” Albano said.

“We’re doing everything possible to get this launch right,” Albano said. “It is a critical launch.”

That includes coming up with the idea for the study that tracks early adopters.

Not separate, still not equal: Pressure grows on America’s companies to fix failures of the past

Earlier this summer, GM’s luxury brand quietly pushed the Cadillac Lyriq Targeted Private Offer to certain customers, as first reported by Carsdirect.com on June 30. In a dealer bulletin last month, Cadillac said the program was available nationally and GM offered selected customers a $5,500 cash allowance on the 2023 Lyriq when buying or leasing from June 28 through August 31, according to Carsdirect.com.

The bulletin, said Carsdirect.com, stopped short of saying who was eligible or why GM had such a deal going.

But a Cadillac dealer familiar with the program told the Free Press this week that, in exchange for the rebate, the selected customers agreed to be part of an early adopters’ study and give Cadillac access to their driving patterns. The dealer asked to not be identified because he is not authorized to speak for Cadillac.

What’s everyone talking about?: Sign up for our trending newsletter to get the latest news of the day

Albano said there are about 20 customers that were chosen for it. He declined to outline the parameters for how participants were selected, but Albano said they are mostly located within New York, Detroit and Los Angeles areas and are “early adopters, they’re tech savvy and they want the first and the best.”

“The number of customers involved is intentionally very small,” Albano said in an email. “We will use the program to learn more about customer behaviors and their vehicles. Beyond that, the details of the program are a private agreement between the customer and Cadillac.”

All of GM ‘up for evaluation’

Cadillac opened the order banks for the Lyriq on May 19, but in two hours it stopped taking orders for the 2023 Lyriq, saying it sold out. GM will not quantify what sold out means, but earlier this year GM told suppliers to prepare to produce 25,000 Lyriqs this year.

GM’s luxury brand has a lot riding on the Lyriq being a success.

“The Lyriq is really important to Cadillac. Really important,” said Erik Gordon, a business professor at Ross School of Business at the University of Michigan. “If this works, the Cadillac brand moves forward. If it doesn’t work, someone’s going to lose their head at Cadillac and they’re going to have to figure out what to do to make the brand relevant.”

So it’s no surprise that GM is taking an extra step with this unprecedented customer study to protect the brand, Gordon said. Still, it’s an unusual and bold move that you typically see in industries outside of autos, he said. Technology industries, he said, will launch beta versions of their software to customers for feedback and to make tweaks and updates before launching the mass version, for example.

“I don’t know of any other instance of this in the car business. But I kind of get it,” Gordon said. “I think it’s more realistic to gather data from non-employees; you get a wider variety of people and people who are not so gung-ho. You get real world data.”

And making customers sign an NDA makes sense, too, because “you don’t want people to blab about your experiment,” said Gordon, who is also a lawyer and said the NDA is legal in this case and enforceable.

Albano explained GM’s motive to do this study simply as GM is changing not only its lineup to all-electric, but reinventing its go-to-market strategy and, “every part of our business is up for evaluation. There’s not a single part of our business that we’re not transforming.”

Consumer Reports: Lexus has most reliable car of 2022, Tesla has ‘problems’

“But there’s a lot we can learn from customers beyond the physical vehicle,” Albano said. “We can see their charging behaviors, driving behaviors and how they use the vehicle.”

Albano said GM will use “a variety of ways to gather information from the customers,” including direct phone calls, dealer contacts and a dedicated EV concierge team. He did not have more specifics, including how long the NDA lasts, what the penalty is for violating it and if GM will monitor vehicle software to gather data.

Several Cadillac dealers told the Free Press they support the customer study, calling it smart because it could help Cadillac spot and fix any production or engineering bugs early on and it provides Cadillac knowledge of customer driving behavior to make future improvements on vehicles.

And it could help GM avoid massive recalls of a newly launched vehicle, such as that of Ford Motor Co., which in June issued a recall affecting 48,924 of the 2021-22 Mustang Mach-E vehicles built during a two-year time period. The EV could lose power while driving or not start.

On Monday, three owners of the recalled Mach-E filed a federal lawsuit against Ford saying the automaker has known of a design flaw in its electric vehicles that causes the power loss while driving, but has not figured out how to fix the problem.

“You want to fix the first 100 of them, you don’t want to do a big recall,” Gordon said of new-vehicle launches. “A recall is expensive and it hurts the brand.”

Not your father’s customer

Ivan Drury worked in product planning at American Honda Motor Co. well before his current role as senior manager of insights at Edmunds.com. At Honda, the company held focus groups with customers or hired third-party research firms to poll customers and do dependability studies, he said.

But GM’s program is, “the first time I’ve heard of it to this extent.” But he applauds it. “With data they collect through the vehicle, they can actually verify things. If they are looking through a true lens — then this is the way to go,” Drury said.

Drury also understands why GM would want the participants to sign an NDA but he hopes the customers understand it could mean, “You can get some powerful data sets. (GM’s) not wasting their money.”

Drury called the Lyriq “one of the most important launches in the last decade” and said GM should monitor all it can in the cars.

GM would have to wait too long if it commissioned an outside company to do a study on customer reaction to the Lyriq or its performance, Drury said. Eager, tech-savvy customers want flawless technology fast. They lack the patience and tolerance of traditional car buyers.

“This is a different kind of customer,” Drury said.