Hertz (HTZ) is pushing forward with its electric vehicle (EV) options with Tesla (TSLA) once again.

First spotted by EV blog Electrek, Hertz has added Tesla’s Model Y crossover to its EV offerings on the company’s website. Previously only the Tesla Model 3 was available to rent.

So far, only Model 3s are available for rental at select airports in D.C. (Dulles), Florida, California, and Georgia. 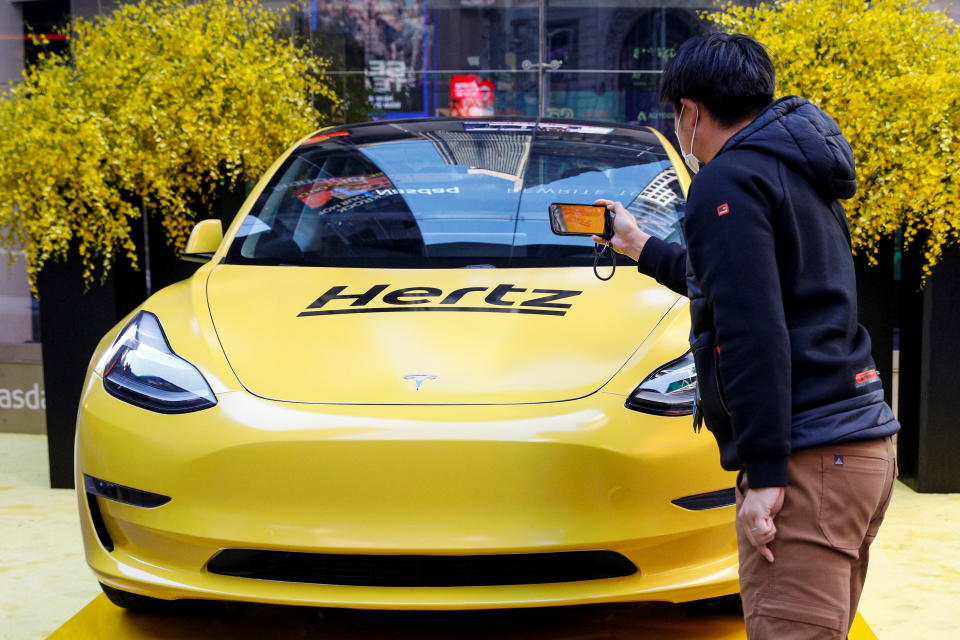 In a statement to Yahoo Finance regarding the Model Y, a Hertz spokesperson said:

Hertz promoting the Model Y on its website before it is available to rent is not surprising for brand that is known for creating a lot of buzz recently.

Recall last year when Hertz announced it would electrify its rental car fleet with a huge order of 100,000 Tesla Model 3 sedans. Hertz even signed on NFL star Tom Brady to make the announcement in a flashy ad.

The news sent Hertz and Tesla shares rocketing higher, with Tesla soaring to a new record high and topping the $1 trillion market cap milestone. Hertz, one of the original meme stocks prior to its bankruptcy, was once again on the WallStreetBets reddit radar.

Then, in a surprising twist, Tesla CEO Elon Musk poured cold water on the so-called deal, claiming there was no actual agreement between Hertz and Tesla, and that Hertz was just a regular customer like any other fleet buyer.

It is also unclear whether the Hertz’s Model Ys are actually part of the 100,000 Tesla Model 3 order that Hertz announced last year.

The news of the Model Y addition to the fleet comes at an inflection point for Hertz as its turnaround plan swings into motion. Just last month Hertz announced that Stephen Scherr, former CFO at Goldman Sachs, would be its new CEO, replacing interim CEO and longtime Ford (F) exec Mark Fields.

And last month, while Hertz announced earnings that beat Wall Street estimates for the fourth quarter, some analysts were hesitant to recommend the stock. Morgan Stanley analyst Billy Kovanis noted that now could be a good entry point for the stock, but he still cautious due to pricing pressure.

“While we remain Equal-weight rated, we see a positive risk/reward skew with a compelling ~25% upside to our Price Target,” Kovanis said in a note last month, despite reducing his price target from $27 to $25. “For us to be more bullish we would need more conviction that pricing can hold up structurally higher than pre-covid, as well as more upside % on the name.”

Hertz and Tesla shares are both slightly higher today in midday trading.