When the S&P 500 officially dropped into a bear market on June 13, closing down more than 20% from its last peak, it stirred debate about whether investors should hold tight or think about buying the dip.

Battered stock prices SPX, -2.01% might look tempting for investors, but analysts at the Wells Fargo Investment Institute warned on Tuesday that the “technical damage in markets” in this bear market likely will take “time to repair.”

To inform their view, the team studied spotted 11 past S&P 500 bear markets since World War II, finding that the downdrafts lasted an average of 16 month (see chart) and produced a negative 35.1% bear-market return. 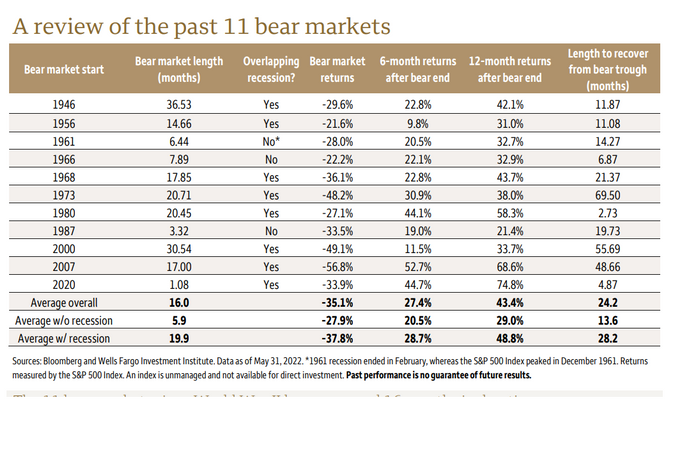 Another key takeaway was that past bear markets outside of an economic recession were much shorter — about 6 months on average — and had a slightly less damaging bear-market return of -28.9%.

However, the duration extended to about 20 months on average with a recession and a more severe -37.8% return.

Of note, the current bear market is backdated to Jan. 3, when the S&P 500 closed at an all-time high of 4,796.56, according to Dow Jones Market Data. Therefore, it technically already sits deep into its fifth month.

“It may be tempting to try and take advantage of recent weakness, but while we expect additional entry points in coming months, for now we favor patience before committing new cash to equities,” the Wells team wrote.

“With the Federal Reserve just beginning the tightening cycle, we have shifted our investment preferences away from economically sensitive assets and toward more quality-oriented and defensive assets.”

New York Federal Reserve President John Williams on Tuesday said he expects the U.S. economy to slow, but that a recession can be avoided. He also said the Fed’s policy rate may need to hit 4% sometime next year, up from its current 1.5%-1.75% target range, to help cool high inflation.

Also see: Presidential election cycle shows that stock market may bottom in the third quarter before rally in the fourth, analyst says