Compared to the bullish trends of recent years, 2022’s stock market action has been noticeably different. Huge losses have been the order of the day across virtually every segment of the market. Even previous perennial winners still showing signs of huge growth have taken a sound beating.

Case in point: Nvidia (NVDA). In the company’s latest quarterly statement, for the fiscal first quarter of 2022, revenue increased by 46% from a year ago and 8% sequentially to a record $8.29 billion, while both its biggest breadwinners – Data Center and Gaming – reported record revenue too.

That hasn’t helped the stock much, as investors have been concerned around slowing demand for its products amidst an economic downturn. To wit, the shares have declined 48% year-to-date.

But if you ask Ivan Feinseth, a 5-star analyst from Tigress Financial, Nvidia has positioned itself for a rebound by next year. Feinseth believes Nvidia’s “leadership position in data centers, autonomous technology, and AI will continue to drive accelerating growth.”

There have also been some “breakthrough product introductions.”

Based on the new Hopper GPU architecture, the company recently announced the H100 Tensor Core GPU, which will “massively speed up AI software development powering increasing understanding of human speech and genomic research.”

There’s also the opportunity afforded by the metaverse, as noted in an expansion of its partnership with Siemens which will connect Siemens Xcelerator platform with Nvidia’s Omniverse 3D-design offering. “The partnership creates an industrial metaverse with physics-based digital models from Siemens and AI-enabled, physically accurate, real-time simulation from NVDA,” Feinseth noted.

However, on what he terms a “rerating of valuation,” Feinseth thinks it’s time to lower his price target on Nvidia. The figure drops from $410 to $310. Nevertheless, there’s still room for one-year upside of ~105%. The analyst’s Buy rating stays intact. (To watch Feinseth’s track record, click here)

So, Feinseth remains upbeat despite the difficult operating environment and so does most of the Street. The stock boasts a Strong Buy consensus rating based on 27 Buys vs. 4 Holds. There are plenty of gains projected too; going by the $261.67 average target, the shares are expected to appreciate ~73% over the coming months. (See Nvidia stock forecast on TipRanks) 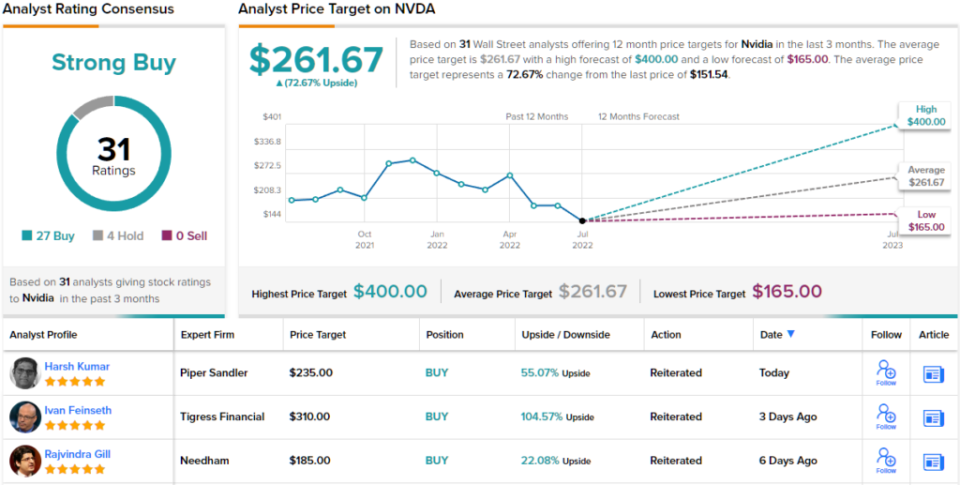