“The magnitude of Russia’s actions will play out for decades to come and mark a turning point in the world order of geopolitics, macroeconomic trends, and capital markets.”

That was Larry Fink, CEO of BlackRock BLK, +0.25%, in his annual letter to shareholders that published Thursday. And in our call of the day, he closed the door on decades of global economies connecting.

“I remain a long-term believer in the benefits of globalization and the power of global capital markets,” said the head of the world’s biggest asset manager. “But the Russian invasion of Ukraine has put an end to the globalization we have experienced over the last three decades.”

That disconnectivity between people, nations and companies got a head start from two years of the pandemic. “It has left many communities and people feeling isolated and looking inward. I believe this has exacerbated the polarization and extremist behavior we are seeing across society today,” he said.

And now Russia’s aggression against its neighbor and decoupling from the global economy will lead companies and governments worldwide to “re-evaluate their dependencies and reanalyze their manufacturing and assembly footprints – something that COVID had already spurred many to start doing,” he said.

While dependence on Russian energy is in the spotlight, we’re also likely to see companies and governments bring operations either onshore or close to home, which could benefit Mexico, Brazil, the U.S. or Southeast Asia.

And that means higher costs and margin pressures are ahead. “While companies’ and consumers’ balance sheets are strong today, giving them more of a cushion to weather these difficulties, a large-scale reorientation of supply chains will inherently be inflationary,” said Fink.

Also weighing in on globalization was Oaktree Capital Management founder Howard Marks, whose own letter to investors discussed the “pendulum” swinging back toward local sourcing. “Rather than the cheapest, easiest and greenest sources, there’ll probably be more of a premium on the safest and surest,” he said. That could impact investors as globalization has boosted worldwide GDP, but may also boost domestic manufacturing jobs.

Fink made a couple more points, such as the possibility of the war in Ukraine speeding up digital currencies as countries reconsider dependence on traditional ones. “A global digital payment system, thoughtfully designed, can enhance the settlement of international transactions while reducing the risk of money laundering and corruption,” he said.

And while near-term progress toward net zero now faces a setback amid the tumult, the global shift to green energy may get a boost. “Higher energy prices will also meaningfully reduce the green premium for clean technologies and enable renewables,” he said.

President Joe Biden is meeting with NATO and Europe allies, with more Russia sanctions expected. Ukraine President Volodymyr Zelensky has called for citizens all over the world to show support for his country on Thursday, as battles continue, with his forces claiming to have destroyed a Russian ship.

Russia’s stock market gained on the first day of trading in weeks, but under fairly stiff conditions, with just 33 companies trading, no selling by foreigners or short sellers.

North Korea has fired what Japan claims is an interballistic missile test into the ocean.

The chief executives of 10 airlines, including Delta DAL, +2.87% and American AAL, +3.15%, are asking Biden to end pandemic travel precautions. That’s as the World Health Organization warns that COVID vaccinations have ground to a halt since war broke out in Ukraine.

Uber UBER, +4.96% shares are jumping on a report the ride-share company will add all New York taxis to its app.

Nikola NKLA, +5.69% stock is soaring towards a 2 1/2 month high after confirming production of an electric truck late Wednesday.

Delivery-app company Instacart is expanding software offerings to grocers that want to compete with Amazon AMZN, +0.15%, as Wall Street waits for the IPO.

Spotify SPOT, +0.46% stock is up after the streaming music provider announced deal with Alphabet’s GOOGL, +2.38% Google for an alternative in-app payment method. 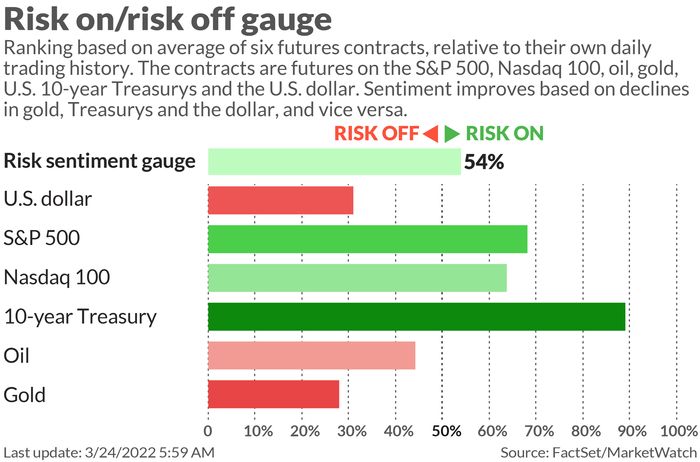 These were the top-searched tickers on MarketWatch as of 6 a.m. Eastern Time.