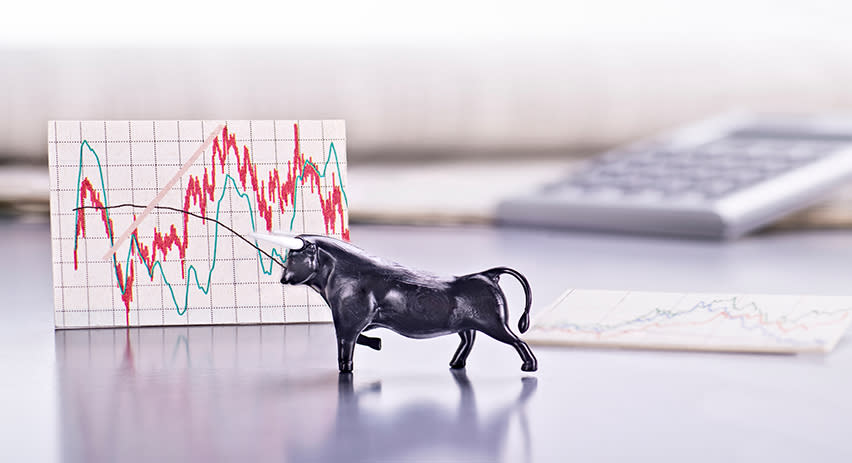 Did markets hit a turning point? The past couple of months brought us a seven-week losing streak in stocks, the longest such streak in over a decade, but the week before the Memorial Day holiday weekend saw strong gains. The S&P 500 wiped out its May losses. Post-holiday trading shows that some of these gains are continuing.

If so, then it makes this the ideal time to ‘buy the dip,’ to get in while stocks remain at low cost, with attractive entry points. That’s the view from investment firm JPMorgan, where Dubravko Lakos-Bujas of the equity macro research group tries to bring some clarity from the overall situation. Lakos-Bujas points out that certain sectors – notably small-caps, defensive stocks, and biotechs – are likely to benefit most from this dynamic, and writes, “Biotech is one of the most attractive on valuation while Pharma is also trading at cheapest level in a decade.”

These are bright spots in an otherwise dark picture, but they do point to a way forward for investors willing to shoulder the risk. The stock analysts at JPM are following that path, finding stocks in Lakos-Bujas’ favored sectors that feature cheap valuations. We’ve opened up the TipRanks database to pull up the details on two such picks; here’s a closer look.

Stroke, aneurysms, and embolisms are dangerous conditions with a common denominator: damage or blockage of the vascular system. Penumbra is a medical device company specializing in this field, offering a line of devices for the treatment of strokes and other vascular-related conditions. The company’s devices are used in the treatment of acute ischemic stroke, brain aneurysms, and deep vein thrombosis, among others.

Penumbra’s leading device is the Indigo Aspiration System, for use in vascular thrombectomy. Indigo is described as having had a ‘significant impact’ on its US patient base; the device is designed to remove blood clots in the peripheral arterial and venous systems, and to treat pulmonary embolisms, with minimal bleeding and blood loss.

The company announced in April that the Indigo system has now been launched in Europe. The opening of a European market is an important expansion for Penumbra. Currently the company’s US base accounts for 71% of total revenue. That top line reached $203.9 million in 1Q22, a gain of 20% over the year-ago total. Sales of vascular products accounted for $122.8 million of the total, while the company’s neuro products – used in treating the vascular system of the head and brain – brought in $81.1 million. Penumbra is preparing release of its latest system, Thunderbolt, which is expected next year.

Analyst Robbie Marcus, covering PEN for JPMorgan, sees reason for optimism on this stock. He writes, “We feel incrementally more positive on the longer-term outlook given the strong early reception for Thunderbolt and progress made building out the Real VR platform, and see a high probability of accelerating growth in 2023. Along with healthy trends in Peripheral, we think this all supports an attractive long-term growth outlook… We view today’s valuation as an attractive entry point into a multi-year growth story driven by leadership in a diverse set of highly attractive end markets.”

Everything that PEN has going for it prompted Marcus to rate the stock an Overweight (i.e. Buy). The cherry on top? His $245 price target implies ~74% upside from current levels. (To watch Marcus’ track record, click here)

Overall, this medical device firm has picked up 6 reviews from the Wall Street analysts in recent weeks, and these include 5 Buys against a single Hold for a Strong Buy consensus rating. The shares are priced at $140 and their $250.40 average price target suggests a one-year upside of 78%. (See PEN stock forecast on TipRanks) 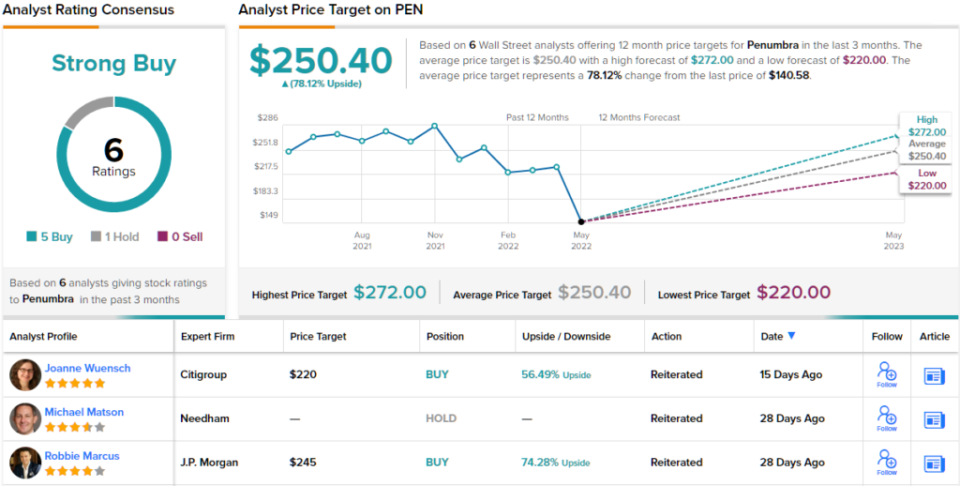 From medical devices we’ll move on to the cutting edge of biopharma tech, gene therapy, and look at Rocket Pharmaceuticals. This clinical-stage firm is a leader in the gene therapy field, developing novel treatments for severe disease conditions with high unmet medical needs. Gene therapies adapt various viruses as delivery systems to insert genetic information directly into disease-affected cells, altering the condition at the genetic and molecular levels. These therapies offer the potential to cure, and not just to treat, the targeted diseases.

Rocket has four programs currently undergoing human clinical trials. The most advanced of these is the LAD-I track, studying drug candidate RP-L201. In May, Rocket presented top line data from the Phase 2 pivotal trial, showing that RP-L201 was well-tolerated by all patients in the trial and demonstrated a 100% survival rate one year after the drug infusion. All patients showed a clinical reversal of the disease course. Based on these findings, Rocket is planning to continue with regulatory filings in 1H23.

Also in May, Rocket released updates on its other three clinical tracks. RP-L102, a treatment for Fanconi Anemia, is at the Phase 2 pivotal stage and the clinical trial is underway. Top line data is expected for release in 3Q22. RP-A501, a treatment for Danon Disease, is also undergoing an active clinical trial, at Phase 1. The company is on schedule to release the pediatric patient cohort data during the third quarter of this year, and to initiate the pivotal Phase 2 trial in Q4. Finally, the PKD track, for RP-L301 in the treatment of Pyruvate Kinase Deficiency, is also progressing as anticipated. This trial is expected to release preliminary Phase 1 data during 4Q22, and at the same time to initiate activity in a Phase 2 pivotal trial.

All of this gives Rocket Pharmaceuticals an enviable position for any biopharma researcher: these many ‘shots on goal’ provide plenty of potential for the company to deliver, even in a field as difficult as biopharmaceuticals.

JPMorgan analyst Eric Joseph looked under the hood of RP-L201 and wrote: “RP-L201 treated patients also showed a significant reduction in prolonged hospitalization or severe infections relative to pre-treatment event rates, amounting to a meaningful improvement in their disease prognosis. There were no surprises on safety, with an overall well-tolerated profile consistent with earlier updates,” seeing this drug candidate as the main driver for the company.

Joseph went on to add, about Rocket’s overall position: “Along these lines, in view of multiple clinical readouts on track within 2022, including Danon pediatric efficacy data in 3Q22, we see current share levels as an attractive entry point to capture longer-term pipeline potential.”

This reinforces the analyst’s view that Rocket is a stock to “buy,” and worth a $67 target price. At current levels, this target suggests a robust 462% upside for the coming year. (To watch Joseph’s track record, click here)

Some companies show a singularly strong outlook, and that can be seen when Wall Street’s analysts – who don’t always agree – come down unanimously in favor of a stock. RCKT has 9 recent positive analyst reviews, for a Strong Buy consensus rating. The shares are selling for $12.01 and have an average price target of $64.40, indicating a 12-month upside potential of 436%. (See RCKT stock forecast on TipRanks) 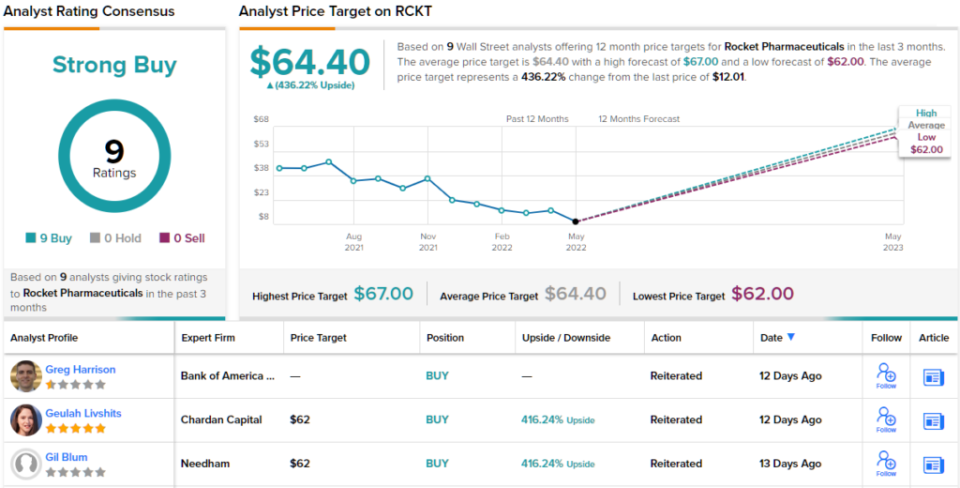