Micron is set to report earnings on Thursday after the close, but the stock sits on critical support. Will it hold or will it fold?

Micron  (MU) – Get Micron Technology Inc. Report stock has not had a good stretch lately, with shares falling in four of the last five weeks and currently down about 26% from the May high.

Bulls are hoping but that earnings can save the stock, with the report due up after the close on Thursday.

Of course, the worry is that the quarterly results will drop the stock down below a key support zone. As of Wednesday’s action, this area is still holding on — admittedly though, it’s hanging by a thread.

In fact, most of the semiconductor and chip stocks have been struggling.

Advanced Micro Devices  (AMD) – Get Advanced Micro Devices Inc. Report, Nvidia  (NVDA) – Get NVIDIA Corporation Report, Taiwan Semiconductors  (TSM) – Get Taiwan Semiconductor Manufacturing Company Ltd. Report and others have all been under pressure. With the exception of Qualcomm  (QCOM) – Get QUALCOMM Incorporated Report — which is rallying on a rumor regarding chip supply for Apple  (AAPL) – Get Apple Inc. Report — this space has been crushed.

As a result, all eyes will be on Micron to see if the company’s report can help alleviate some of the pain and raise morale among the bulls. That’s a tall order, though. 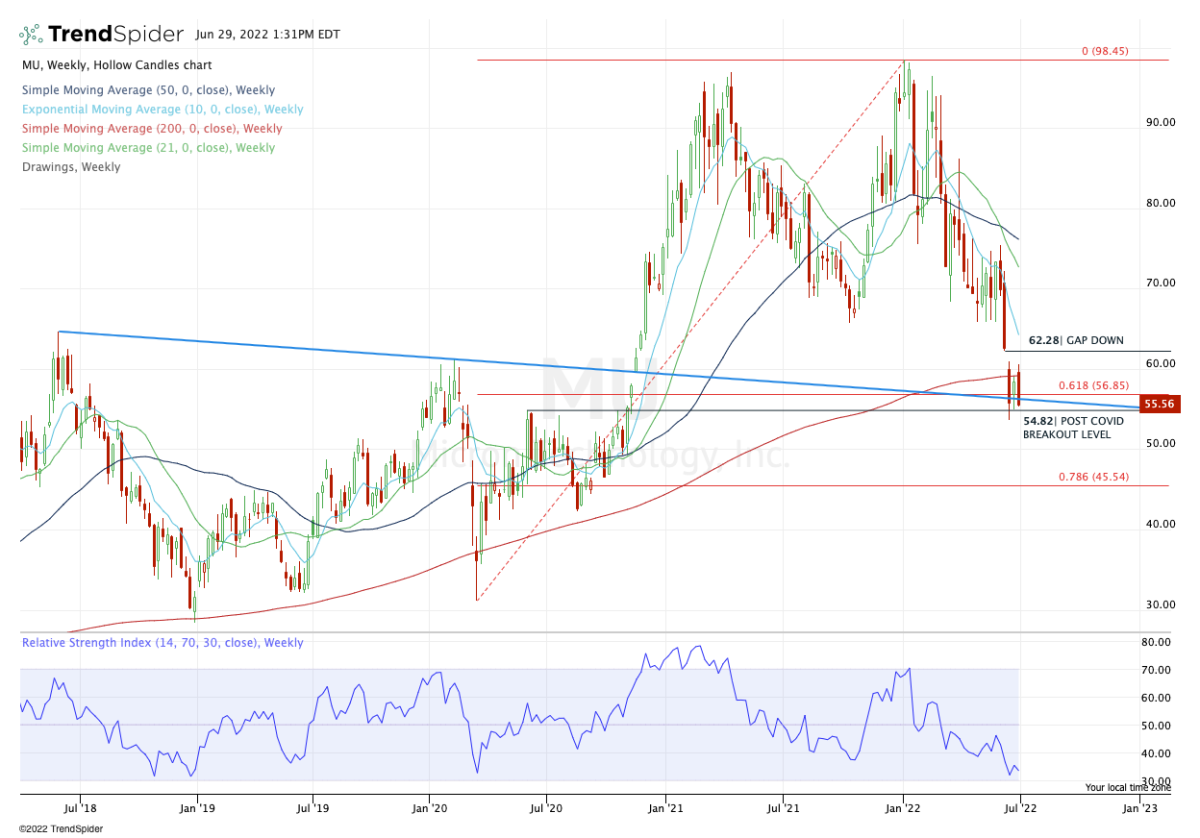 Three weeks ago, Micron stock gapped down and failed to hold the 200-week moving average. In the following week, this measure acted as resistance as the stock bounced off a key level at $55.

The $55 level is key because that was the post-Covid breakout level. When Micron stock cratered lower in the first quarter of 2020, $55 was resistance until the fourth quarter, when the stock went on a powerful 45% run and rallied in five straight weeks.

However, Micron is not trading near a must-hold support level just because it bounced from $55. In the current zone, there’s also the 61.8% retracement and the backside of prior downtrend resistance (blue line).

In that sense, there are a lot of areas to consider here. Unless Micron stock can rally on earnings and clear the $60 to $61 level and the 200-week moving average, then this support zone will remain vulnerable.

To lose this many key measures as support does not bode well for the stock — at least in the short term.