Gen Z workers entering the labor market are pushing to transform the idea of what a typical office job looks like.

According to the Center for Generational Kinetic’s (CGK) Annual State of Gen Z study, starting salary is the most important job factor for Gen Z workers — defined as those who fall between the ages of 16 and 26 — followed by schedule flexibility.

That means employers may have to adjust their expectations in order to retain young talent.

“What’s interesting is they’re also pushing back and saying, ‘Yeah, I want to earn more money, but I don’t want to work those same hours or same days,’” Dorsey continued. “Gen Z actually will take jobs working five days a week if they could pick the hours, move the hours around a bit, then work more days. But if the hours aren’t flexible, then the days become really important.”

The survey’s findings come amid significant turnover in the labor market as employers, particularly for younger workers. Forty percent of Gen Z workers plan to leave a job within two years, the study found.

While other generations, like older millennials following the financial crisis, have gone through similar periods of transition, Dorsey highlighted some of the ways Gen Z is shifting workplace norms. 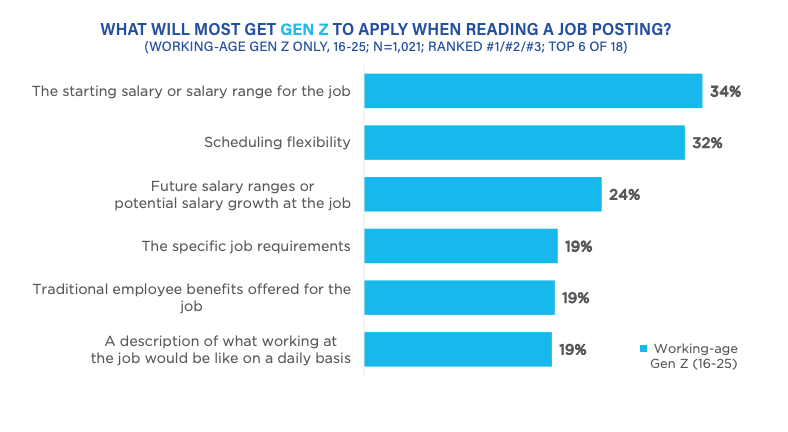 The top aspects of a job posting that motivate Gen Z workers to apply. (CGK State of Gen Z survey)

“The difference here is how young Gen Z is and that it’s socially acceptable within the generation to change jobs,” Dorsey said. “And now, I would argue, for the first time, employers are hiring people that have had short-term stints somewhere else. What I mean by that, it used to be, ‘Well, if you didn’t work somewhere a year, we’re not going to hire you. You’re not loyal.’ And now they’re like, ‘Oh, you’ve worked somewhere at all.’”

Part of Gen Z’s willingness to job hop stems from the ways the pandemic uniquely impacted this generation.

“They were the No. 1 generation laid off during the pandemic, or loss of jobs, loss of hours, loss of pay,” Dorsey explained. “And so, of course, they’re trying to make up for lost time.”

Dorsey also pointed out that Gen Zers “have the least responsibility in terms of family, child, houses, cars, and so forth. So, it’s really a perfect time for them to make that jump.”

If current trends continue, young workers are likely to see more bargaining power when looking for new jobs. They may even be in a better spot than millennials when it comes to retirement planning. 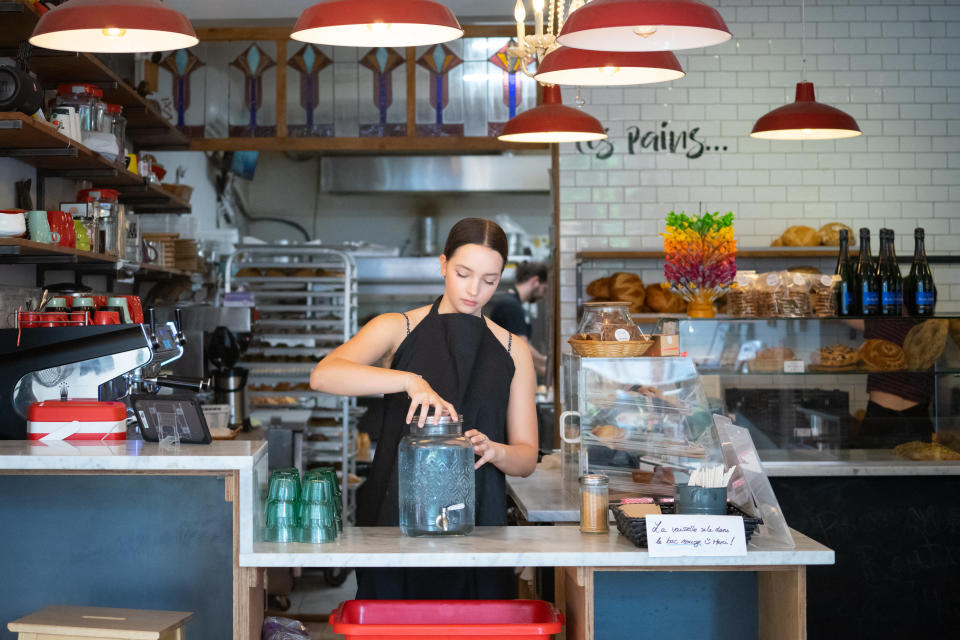 Mya, 16, works at a bakery in Montreal, Canada on June 12, 2022. Quebec is experiencing a shortage of labor and seeing an increase in minor workers. (Photo by PAOLA CHAPDELAINE/AFP via Getty Images)

“As Gen Z continues to move into the workforce, have more skills, more experience, become even more valuable, they’re going to actually get more leverage, which is an opportunity for employers to know what to do and a real challenge for those that try to take it on as business as usual,” Dorsey said.

He also that suggested employers keep Gen Z’s priorities in mind, including their desire for stability as they progress through their careers.

“Stability is suddenly going to be very important to Gen Z as they look ahead,” Dorsey said. “So both life balance is important, as well as starting salary and finding that combination that seems to work.”