Over the past 52 weeks, fintech giant PayPal (PYPL) has lost 75% of its value as investors began questioning the stock’s growth prospects in the face of a looming recession. Two weeks from now, after close of trading on Tuesday, August 2, PayPal will get a chance to dispel those fears — or confirm them — when it reports its Q2 2022 earnings.

Ahead of those earnings, Wall Street is hedging its bets.

Case in point: In his earnings preview Thursday, RBC Capital analyst Daniel Perlin reiterated his “outperform” rating on PayPal stock. But citing “FX headwinds, coupled with what appears to be slowing ecom spending in Q2/22,” Perlin nonetheless ratcheted back his expectations for PayPal stock — and cut his price target by 16% to $92 per share. (To watch Perlin’s track record, click here)

As the analyst explains, current consensus Wall Street estimates for PayPal’s revenue and earnings (about $6.8 billion and $0.86 per share, respectively, for the fiscal second quarter) may be missing the fact that, with the U.S. dollar’s value so strong relative to foreign currencies, PayPal’s foreign-source revenues will probably be weaker than expected when translated back into U.S. dollars. With PayPal getting roughly 46% of its revenues from outside U.S. borders, this could be a bigger problem than a lot of investors realize.

Accordingly, Perlin is reducing his estimate for quarterly revenue to $6.7 billion — slightly short of the consensus. Additionally, Perlin thinks that the Street is right in worrying about the economy slowing, and what this will do to PayPal’s business. Citing consumer e-commerce spending data from Mastercard’s SpendingPulse, Perlin notes that spending growth slowed by more than three full percentage points between Q2 and Q1 2022 — a trend that’s likely to sap both revenue and earnings strength from PayPal when it reports.

The good news is that Perlin sees more strength in PayPal’s “other value-added services,” a revenue stream that includes everything from revenue from partnerships and referral fees to services PayPal provides to merchants and consumers — and also interest PayPal charges on loans to its customers, and interest PayPal itself earns from positive balances in consumers’ PayPal accounts.

Such “OVAS revenue could surprise to the upside given higher rates and could help offset some of the FX headwinds,” opines the analyst. And as a result, while Perlin sees revenues coming in slightly below estimates, his prediction of an $0.87 per share profit at PayPal this quarter is actually a penny above consensus predictions.

Perlin is also turning more cautious on PayPal’s potential for profit in the more distant future, reducing earnings expectations 4% to $3.75 per share through the end of this year, and making a steeper 12% cut to his prediction for fiscal 2023 (now $4.60 per share), by which time the impending recession could be in full swing. Still, assuming he’s right, this implies that PayPal stock is selling for only about 18.5 times current year earnings — and that those earnings will still grow a very respectable 22% even in the teeth of a recession.

Only time will tell if he’s right about those numbers, but if he is right, then paying 18.5x earnings for a 22% grower sounds like a pretty good deal — and a good reason to keep recommending PayPal stock.

Looking at the Street’s consensus rating here, we can tell that Perlin’s bullish view is mainstream. PayPal has 30 analyst reviews, breaking down to 25 Buys and 4 Holds – this gives the stock a Strong Buy consensus rating. The shares are priced at $73.91 with an average target of $116.42, somewhat higher than Perlin allows, and suggesting a one-year upside of 57.5%. (See PYPL stock forecast on TipRanks) 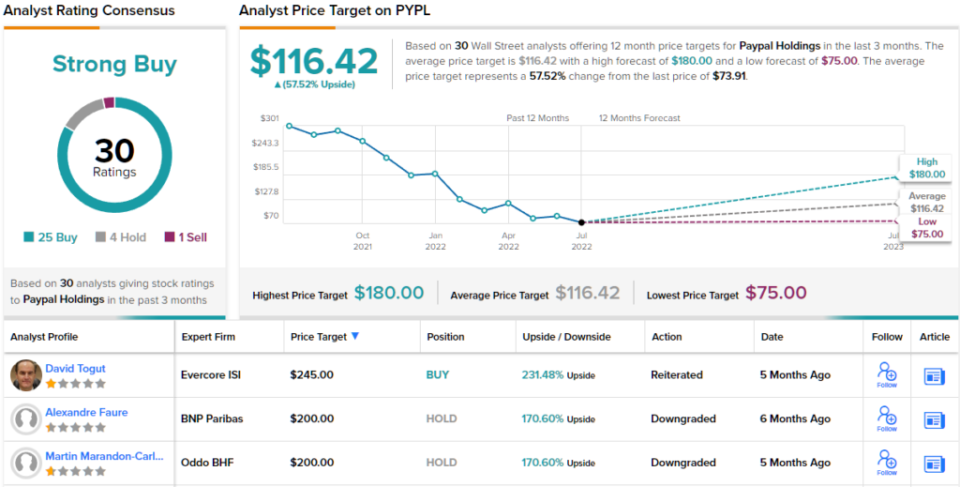