While economists debate the likelihood of a recession in the next year, the U.S. is stuck at an uncomfortable way station – stagflation.

As the word implies, this economic predicament features slowing or stagnating growth and high inflation.

The U.S. economy contracted by 1.5% in the first quarter, with headline consumer prices rising by 8.6% in May. Investor concerns over the Federal Reserve’s ability to engineer a so-called “soft landing” — which averts recession while slowing inflation — have been rising, and Fed Chair Jerome Powell acknowledged the difficulty in testimony before Congress this week.

“The baseline is stagflation — what we are experiencing now,” Mohamed El-Erian, economist and president of Queens’ College at Cambridge University, said in an interview with Yahoo Finance Live (video above). “So you have a baseline that is not very comfortable, stagflation, and then you have a balance of risk which is the wrong way — recession.”

He’s not alone in that view. “Stagflation fear” as measured by Bank of America’s monthly fund manager survey registered its highest level since June 2008.

Stagflation risks are the highest in 14 years, according to Bank of America’s latest Global Fund Manager Survey. (Source: Bank of America Global Research)

Consumers are on the same page, with University of Michigan’s consumer sentiment index “suggesting consumers are fearing stagflation,” ING economists wrote following the report. “The damage was done in the household finances due to the squeeze on spending power from higher inflation — just 30.8% of households think income growth will outpace inflation over the next five years.”

Stagflation isn’t the trajectory facing just the U.S. economy, either.

Earlier this month, the World Bank cut its forecast for global growth this year to 2.9%, from a prior forecast of 4.1%, and issued a warning: “The global outlook faces significant downside risks, including intensifying geopolitical tensions, an extended period of stagflation reminiscent of the 1970s, widespread financial stress caused by rising borrowing costs, and worsening food insecurity.” 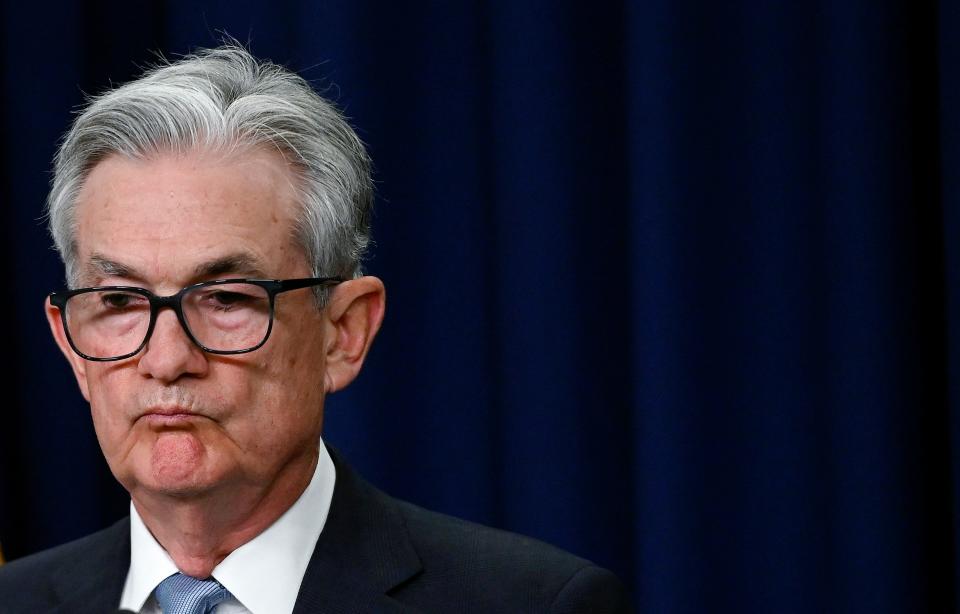 Fed Chair Jerome Powell looks on at a news conference on interest rates, the economy, and monetary policy actions on inflation on June 15, 2022. (Photo by Olivier DOULIERY/AFP)

Europe, in particular, is at risk as well because of its exposure to Russian natural gas and Ukrainian grains. That was further highlighted by Thursday’s purchasing managers’ index for the Eurozone, falling to a 16-month low in June.

Jack-Allen Reynolds, senior Europe economist at Capital Economics, had a simple reaction to the data: “Stagflation has arrived.”