Sometimes, it’s hard getting workers of a certain generation to do much of anything at all.

Here’s one: “Currently, I’m going in every day, and I’m looking at my screen, but I’m pretty much taking a break.”

Granted, that’s not a woke 20-something but Stanley Druckenmiller, the 68-year-old investing legend who runs the Duquesne Family Office and managed money for George Soros. He has a reason for his inactivity.

“I’ve lived through enough bear markets, that if you get aggressive in a bear market on the short side, you can get your head ripped off in rallies,” he said, according to a clip from the 2022 Sohn Investment Conference that was aired on CNBC.

Druckenmiller said, according to Bloomberg News’ account, that it’s possible the first leg of the bear market has ended. “But I think it’s highly, highly probable that the bear market has a ways to run.” His rationale is simple enough — there has never been a soft landing when inflation has been above 4.5%.

At the end of the first quarter, his top positions were South Korean online marketplace Coupang CPNG, -5.84%, Microsoft MSFT, -3.74%, miner Freeport-McMoRan FCX, -1.65%, Amazon.com AMZN, -5.59% and Chevron CVX, -1.37%, according to his 13-F filing. The Freeport-McMoRan and Chevron holdings fit with his comment that he has owned key commodities including oil, gold and copper this year, while betting against fixed income and stocks.

According to Bloomberg, Druckenmiller will look to bet against the dollar DXY, +0.96% sometime in the next six months, as he also expects to short stocks again.

U.S. consumer price growth accelerated to 1% in May, the Labor Department reported on Friday, topping consensus expectations. Core price growth stayed at 0.6%. Over the last 12 months, prices have gained 8.6%, the fastest inflation rate since 1981.

Shortly after the open, the University of Michigan’s consumer sentiment index is due for release.

Japan’s Ministry of Finance, the Bank of Japan and the Financial Services Agency on Friday expressed concern over the yen’s USDJPY, -0.11% recent rapid weakening.

The U.K. Competition and Markets Authority said it is consulting on the launch of a probe into Apple AAPL, -3.21% and Google’s GOOGL, -3.29% market power in mobile browsers. Apple, the regulator said, has also blocked the emergence of cloud gaming services on its App Store, while the regulator is launching an enforcement action against Google for how users can make in-app payments.

Here were the most active stock-market ticker symbols as of 6 a.m. Eastern. 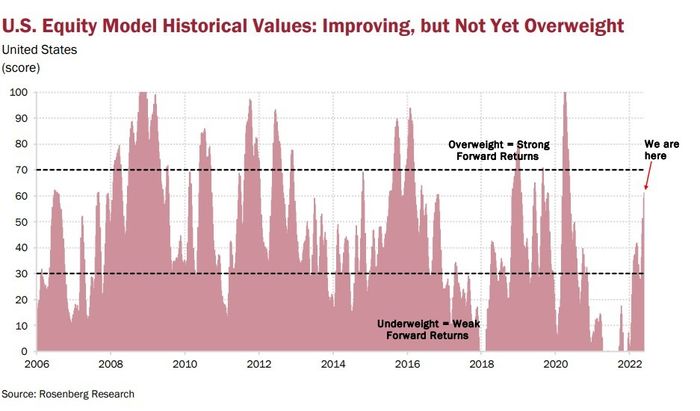 David Rosenberg, the veteran Wall Street strategist who has been pessimistic on markets for some time, is becoming a bit more positive. The founder of Rosenberg Research writes that the combination of euphoric sentiment, stretched positioning and excessive valuations are being unwound, although he expects the drawdown in stocks to continue. His equity model has improved to a level suggesting above-average returns of 13.8% over the next 12 months. “As such, for investors that started the year underweight U.S. stocks (as our model recommended), we believe it makes sense to increase exposure somewhat,” he says.

Here’s a look at why it’s so expensive to make a nuclear power plant.

A relaunch of McDonald’s MCD, -1.65% restaurants in Russia, under a new, as-yet undisclosed name, is set for Sunday.

Baby formula is one thing, but now there’s a looming shortage of Sriracha sauce.