Investors seemed to take Friday’s stronger-than-expected jobs data as a sign the Federal Reserve will remain resolute in its plans to aggressively raise interest rates, with another 0.75% increase in its benchmark rate likely coming later this month.

Economists surveyed by Bloomberg expected payroll gains would total 268,000 last month, the smallest of the pandemic recovery but well above the pre-COVID average of about 164,000 per month throughout 2019. The unemployment rate was forecast to hold steady at 3.6%.

GameStop stock (GME) was among movers in early trading after the video game retailer said Thursday that it terminated its CFO Michael Recupero and revealed plans to slash its workforce as part of a turnaround effort by the company.

Shares fell on Friday morning after gaining 15% Thursday after the company announced a four-for-one stock split earlier this week.

Twitter (TWTR) shares were down around 4% after the Washington Post reported Tesla CEO Elon Musk’s $44 billion deal to buy Twitter was “in peril,” citing three anonymous sources familiar with the matter. One of the people told the newspaper Musk’s team has “stopped engaging in certain discussions around funding” for the acquisition.

On the global front, former Japanese Prime Minister Shinzo Abe was assassinated during a campaign event on Friday. In Japan, the Nikkei index shed much of its earlier gains to end nearly flat following the news. The Nikkei 225 closed up 0.1% at 26,517.19 after climbing as much as 1.4% earlier in the session. 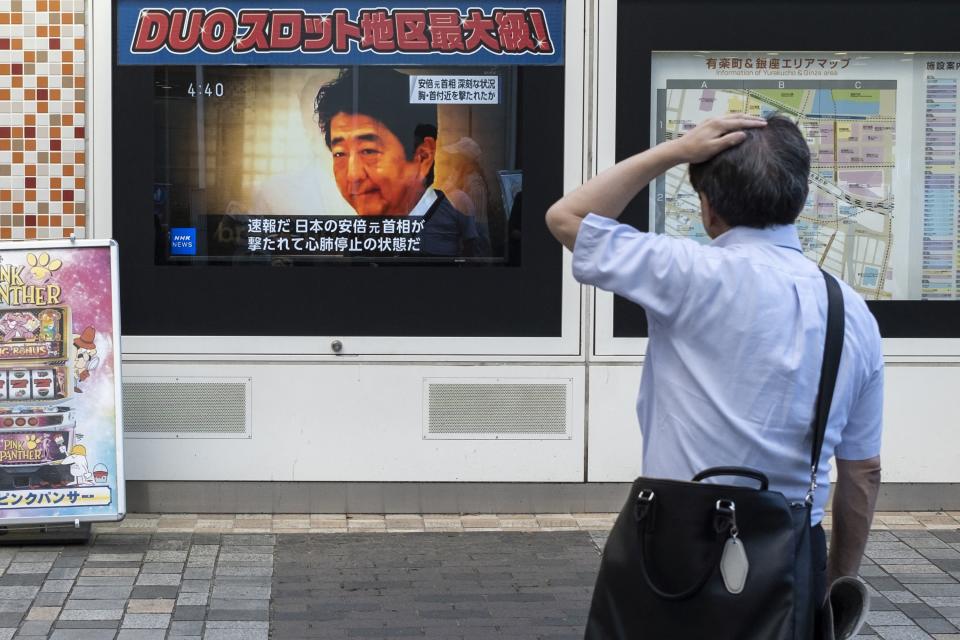 A man looks at a television broadcast showing news about the attack on former Japanese prime minister Shinzo Abe earlier in the day, along a street of Tokyo on July 8, 2022. (Photo by CHARLY TRIBALLEAU/AFP via Getty Images)