August begins with investors looking to build on gains following the best month for U.S. equity markets since late 2020.

In the week ahead, the July jobs report and a continued flood of corporate results will remain top of mind for investors.

Friday’s employment data is expected to show nonfarm payrolls grew by 250,000 in July, while another 150 companies in the S&P 500 are set to report quarterly results in the coming week. Roughly 56% of names in the index have unveiled figures so far.

U.S. stocks finished off their best month since November 2020 on Friday, as markets rallied in each of the week’s final three trading sessions.

For the month of July, the S&P 500 gained 9.1%, fighting back from its worst start to a year since 1962 after the benchmark index plunged 20.6% in the first six months of 2020. The Nasdaq Composite rallied 12.3% to notch one of its best months on record, and the Dow Jones Industrial Average rose 6.7% for the month.

A sharp rebound for equities in recent weeks comes amid expectations that slowing economic growth may prompt the Federal Reserve to scale back its interest rate hiking cycle in the fall.

Last week, the advance estimate for second quarter GDP showed the economy contracted at an annualized rate of 0.9% – marking the second consecutive quarterly decline for the measure and meeting the unofficial definition of a recession.

“Even if we’re in a technical recession already, it may be wishful thinking that inflation will come down quickly enough to allow the Fed to cut rates without having a detrimental effect on the labor market and broader economy in the process,” DWS Group Head of Trading and COO George Catrambone said in a note.

“The market may want to be looking ahead to these cuts, but many companies will not be able to escape demand destruction, margin pressure, reduction in hiring and job cuts, and foreign exchange headwinds that restrictive monetary policy and an increasingly gloomy global environment will bring.” 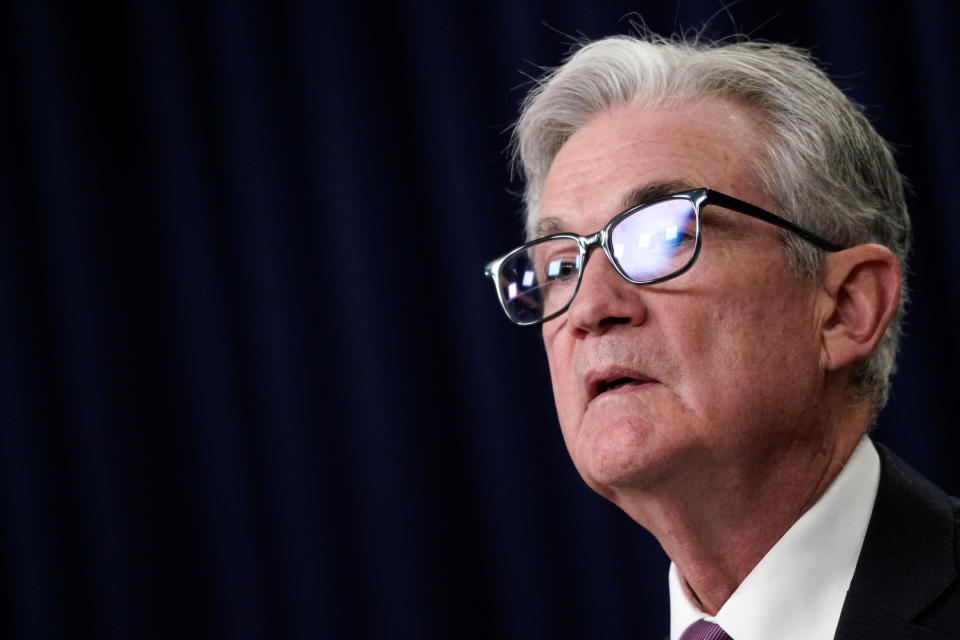 Some better-than-expected earnings reports, particularly from heavyweights Apple (AAPL) and Amazon (AMZN), have so far kept sentiment afloat, but second quarter figures are lackluster. Among S&P 500 companies that have reported results so far for Q2, companies are reporting earnings that are only 3.1% above estimates, below the five-year average of 8.8%, according to data from FactSet Research.

Washington has been quick to point out that despite two consecutive quarters of negative GDP, the National Bureau of Economic Research (NBER) has official say over whether the U.S. economy is in a recession or not. The organization defines a recession as “a significant decline in economic activity that is spread across the economy and that lasts more than a few months.”

But that buffer appears to be showing signs of weakening. Initial jobless claims held near an eight-month high at 256,000 in the week ended July 23 after the prior week’s reading was revised up by 10,000 to the highest level for first-time unemployment insurance filings since November.

And economists expect the broader employment report this week to show 250,000 new jobs were created in July, which would mark a noted decrease from the 372,000 jobs added in June. 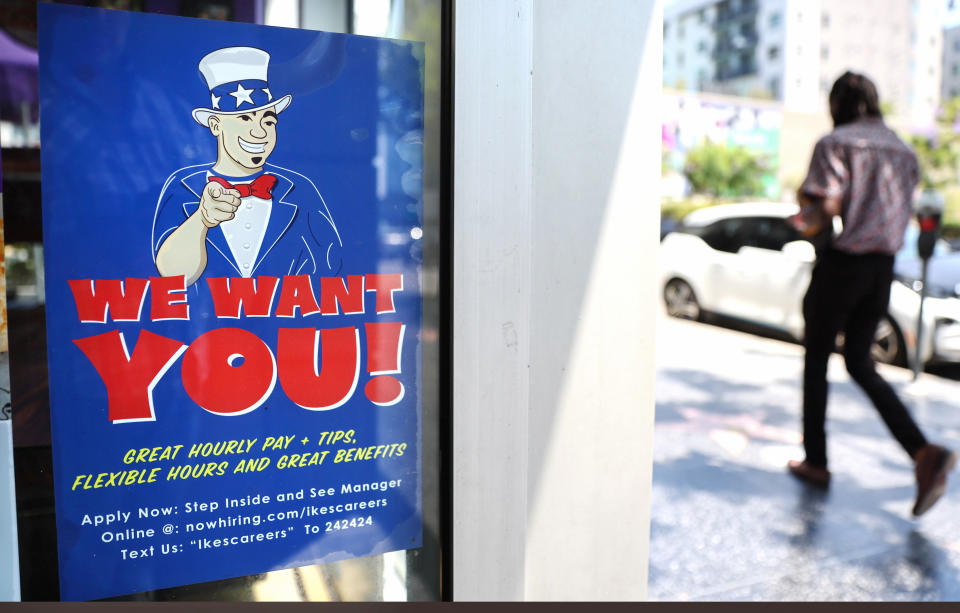 A ‘We Want You!’ sign is posted at an Ike’s Love & Sandwiches store on July 26, 2022 in Los Angeles, California. As the Federal Reserve continues to increase interest rates, the labor market is starting to show signs of slowing down. (Photo by Mario Tama/Getty Images)

“There are growing signs that labor market momentum is cooling from a pretty elevated level,” economists at Bank of America led by Michael Gapen said in a recent note, citing an increase in initial jobless claims and news of company layoffs.

BofA said that although data on job openings from Indeed suggest the latest data to show another solid month of job growth, “the labor market should slow quickly, soon” amid strong hiring and falling GDP creating “an unsustainable collapse in productivity.”

Federal Reserve Chair Jerome Powell said in a statement last week following the U.S. central bank’s decision to bump up interest rates another 75 basis points that the labor market is “moving back into balance” and is only at “the beginning of an adjustment” rather than weakening.

“I would say, there’s some evidence that labor demand may be slowing a bit – labor supply, not so much,” Powell said. “Nonetheless, I would say some progress on demand supply getting back in alignment.”

Elsewhere on the economic calendar, investors will digest ISM manufacturing data, job openings data, and durable goods orders, among other reports. Federal Reserve Bank presidents Charles Evans, James Bullard, and Loretta Mester are also scheduled to give speeches this week as the central bank rolls out of its blackout period after last week’s policy setting meeting.

Earnings in the spotlight this week will come from Caterpillar (CAT), Block (SQ), CVS Health (CVS), Starbucks (SBUX), and Uber (UBER), among other big names.