Tech stocks have gotten some of their mojo back — at least for now. Some of the beaten down tech-related names have rebounded since the market’s most recent bottom on June 16.

In our series “What to do in a bear market,“ Yahoo Finance examines Wall Street analysts’ recommendations on tech related holdings — against a backdrop of a slowing economy and the Federal Reserve’s moves to bring down inflation.

Despite a recent rebound, Communications Services and Technology stocks are two of the most lagging sectors of the S&P 500 year-to-date (behind Consumer Discretionary.)

So what should investors do if they’re holding tech related stocks? We asked the experts.

“That’s our base case as well. So that actually means the environment that we have at the moment is pretty conducive for growth away from value -away from those sort of shorter duration, [for example ] financials- to more of the growth types of stocks,” he added.

“If the Fed can’t really raise rates that much further, then actually tech looks like a pretty decent place to hide out, in conjunction with the wider growth universe,” added Kettner.

Which tech stocks are okay to keep in a portfolio?

David Trainer, CEO of New Constructs said, “Investors should be selective when picking stocks within the tech sector. The strongest types of stocks are the ones where cash flows are strong and valuations underestimate the company’s ability to generate cash flows in the future.”

He said his firms favorite tech stocks include Microsoft (MSFT), Alphabet (GOOGL), Cisco (CSCO) and Oracle (ORCL). “Our advice for investors when it comes to tech stocks is to know what you are buying and fully understand the company’s ability to generate cash flows,” he added.

“It’s important for investors to do their homework — diligence matters. Betting on stocks to keep going up just because they’ve been going up in the past is no longer a reliable strategy,” said Trainer.

What about social media platforms like Meta (META), which is down 52% year-to-date?

“There’s really no catalyst for the ad names,” said Thill. “As long as the broader macro environment is tough, these names aren’t going to work in the short-term.”

He added that patient long-term investors at this multiple will benefit. “Short-term, I think tech is in a really tough spot for the next six months until we get clarity on what ’23 numbers look like,” he said.

The social media platform’s CEO Mark Zuckerberg recently warned the “economic downturn will have a broad impact on the digital advertising business.” Meta, formally known as Facebook, had already been facing challenges because of iPhone maker Apple’s (AAPL) IOS privacy changes — making it more difficult for the company to target ads.

“It’s a lot tougher for ad-driven names,” said Thill. “I think in the interim, dollars are going to continue to move up to Google on the big platform stories, companies that have great cash flow.”

Do some tech stocks perform better than others during slowdowns?

For John Freeman, vice president of equity research at CFRA, the answer is clear. “If you have at least a four year horizon…software just screams YES. It is the place to be,” he told Yahoo Finance.

“In an economic situation, you go more digital, you lean into it. That’s what we’ve seen happen before. And I don’t understand why this time around will be any different,” said Freeman.

“Here’s the other thing about all of these cloud businesses, they are intrinsically very profitable,” he said.

He also prefers software over hardware — or even EV giant Tesla (TSLA), which some investors consider to be a tech company.

“[Tesla] has a lot of software in there … but it sells cars. There’s a gross margin to that. There’s a bill of materials,” he added. “I think Tesla’s a great company. I’m not making a call on the stock but … the software companies look so much better right now.”

Is it wise to hang on to unprofitable tech companies during Fed tightening cycles?

Many unprofitable tech companies did really well in 2020 and 2021, only to see their pandemic gains evaporate.

“Fed tightening cycles are not friendly to speculative tech names,” Hue Roberts, head of analytics at Quant Insight told Yahoo Finance. “Qi has been bearish on unprofitable tech throughout 2022.”

Roberts highlighted Cathie Wood’s ARK Innovation ETF (ARKK). Some of the holdings in the exchange-traded fund include non-profitable tech companies which outperformed during the pandemic.

“The chart below shows ARKK as a benchmark for the sector. The red line shows Qi macro-warranted model value. It has been trending lower all year. Macro conditions have been deteriorating,” said Roberts. 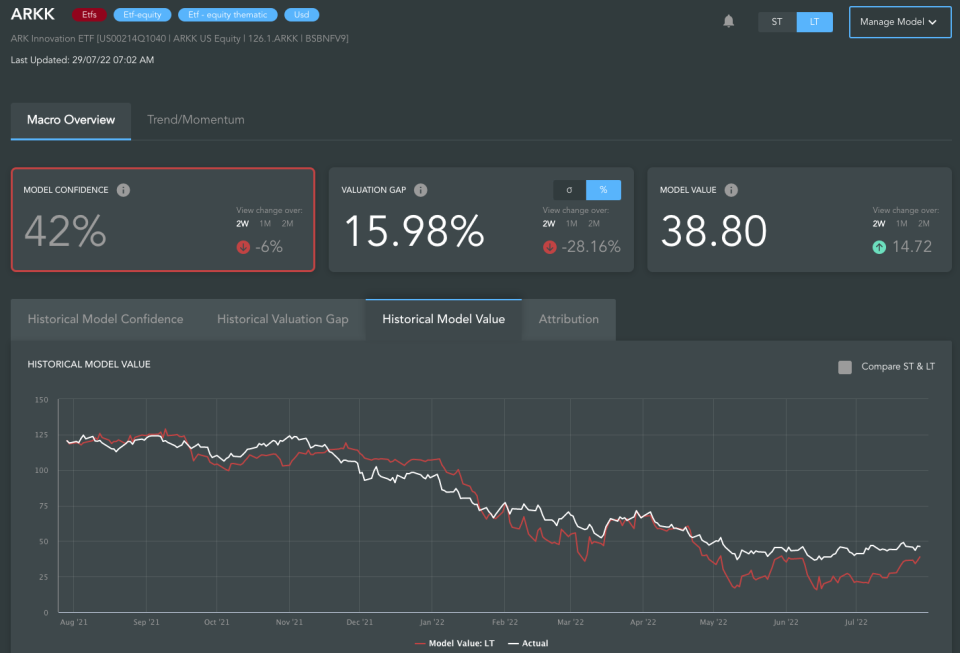 “This week the market has interpreted the Fed as pivoting in a dovish direction. To the extent that’s helped ease financial conditions (lower real yields, tighter credit spreads) that has helped ARKK bounce higher. But we’d want to see the red line make new highs to break the downtrend to signal the all-clear,” said Roberts.