Shares of Tesla (TSLA) are starting to really heat up again, up more than 30% in July. Fueling the bounce was Tesla’s impressive second-quarter beat and the relief rally experienced by the broader tech sector. Though the 57% earnings pop was impressive, the valuation remains incredibly stretched. Further, investors may underestimate the potential for a steep slide as the world economy tilts into a recession.

Not to take away from the incredible efforts of Elon Musk and company, but 12.1 times sales is just too high a price for an automaker that faces a wave of hungry rivals over the coming decade.

Recent comments from the Federal Reserve following another 75 bps rate hike were soothing to investors owning high-multiple growth stocks. While the meeting could spark a relief rally in the most beaten-down names, Tesla’s long-term roadmap could prove very bumpy.

Few firms, especially automakers, are immune from the effects of an economic contraction.

Tesla is making beating on earnings a habit. The latest beat was powered by higher average selling prices and strong vehicle deliveries. Demand for Tesla’s hot line of EVs doesn’t seem to signal that a recession is on the horizon. Whether Tesla’s quarterly strength bodes well for the affluent consumer (who’s less rattled by inflation) remains to be seen.

In any case, Tesla looks to have the momentum of a freight train as we head into a period of economic sluggishness. Whether Tesla’s sales momentum can carry it through this recession is the million-dollar question.

Tesla remains the king of EVs, putting it on the right side of a powerful secular electrification trend that could span many years to come. After such quarterly strength, it certainly seems that secular tailwinds are stronger than economic headwinds.

A strong brand, an impressive lineup of vehicles, and top-of-the-line technologies have been differentiating factors that could act as some sort of moat around the firm’s share of economic profits in the red-hot EV market.

Revenues and margins seem to be on the uptrend. As Tesla’s Superchargers continue rolling out across the nation (and then the world), an increasing number of consumers will be willing to go electric with their next vehicle purchase.

Despite the powerful secular trends, I do not view Tesla’s moat as impenetrable. Tesla may be the EV leader today, but it’s uncertain whether Elon Musk’s empire can retain the throne 10 years from now. As traditional automakers go electric and become more tech-like, Tesla stock may face a considerable valuation multiple contraction.

Alternatively, the electrifying automakers — think Ford (F) — might be rewarded with a substantial multiple expansion. I’d argue that the former case is more probable. The argument for Tesla’s premium multiple has been that the firm is a tech company that makes autos rather than an auto company with cool tech.

Sure, Tesla has intriguing technologies running behind the hood, but are such features and functionality replicable by other automakers who are beckoning in top tech talent? Probably. The playing field is bound to even through the decade, and I’d argue that Tesla may not be able to widen the lead over its competitors.

Tech titan Apple (AAPL) has been rumored to be getting into the auto business for quite some time now. Currently, the rumor mill is pointing to an all-electric and autonomous vehicle that may launch in the latter part of this decade.

As one of the most innovative technology companies on the planet, a move into the auto industry could weigh heavily on Tesla’s economic moat. Apple has the brand and tech to outdo almost any rival it chooses to fight over market share.

All it took was one simple change in its iOS operating system to wreak havoc on social media companies. Apple’s ad business is relatively small today, but the move may lay the foundation for a bigger push in the future, perhaps once the metaverse goes mainstream.

Apple’s entry into auto represents a top threat for Tesla, and I don’t think the threat is factored in at current valuations. Sure, Apple’s many years away from launching a car, but when it does, Tesla’s best days may fall into the rear-view mirror.

Turning to Wall Street, Tesla has a Moderate Buy consensus rating based on 18 Buys, 6 Holds, and 7 Sells assigned in the past three months. The average Tesla price target of $872.28 implies a modest 3.5% upside potential. Analyst price targets range from a low of $73.00 per share to a high of $1,580 per share. (See TSLA stock forecast on TipRanks) 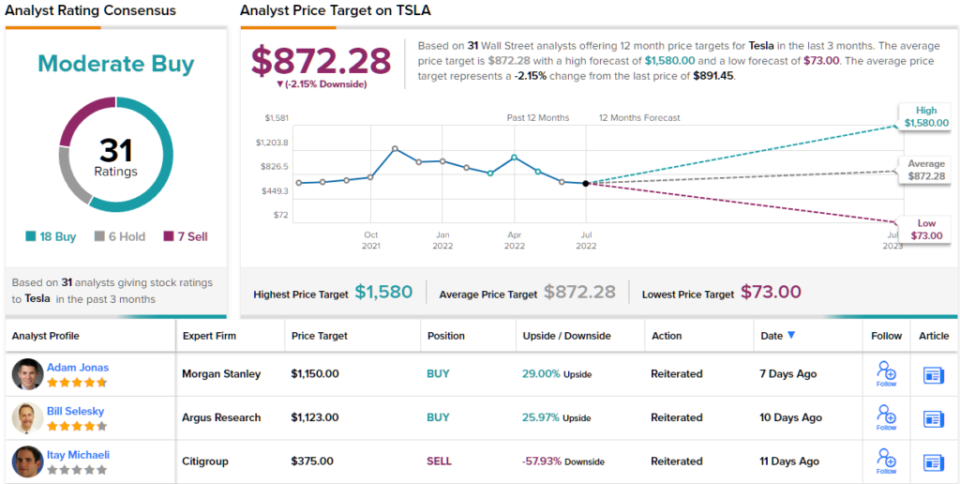 Takeaway: The Valuation Is Too High Relative to the Risks

Tesla is doing almost everything right these days. As we move into a recession, it may be tougher to continue blowing away the results. Further, competitive threats are poised to increase meaningfully over the next six years. Auto rivals and tech companies could find themselves breathing down Tesla’s neck. That doesn’t bode well for the rich multiple.