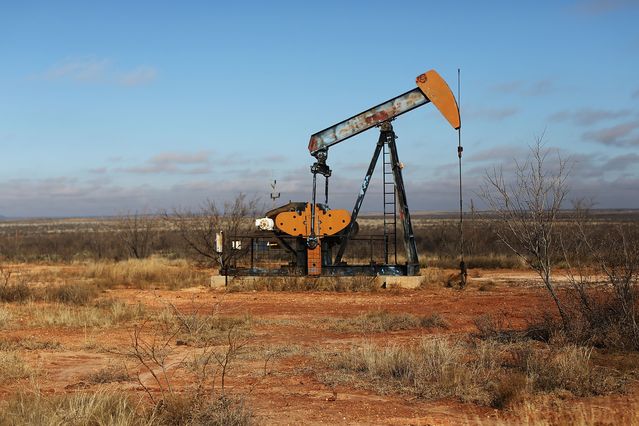 The Federal Reserve Bank of Dallas surveyed 141 oil and gas firms in the 11th Fed District, which includes Texas and parts of New Mexico and Louisiana. Spencer Platt/Getty Images

Oil and gas executives don’t have much love for President Biden, but he’s not the main reason they’re holding off on drilling new wells.

The latest quarterly survey put out by the Federal Reserve Bank of Dallas shows that most executives are reticent about ramping up drilling because of pressure from investors and lenders, not from government regulations. That said, in anonymous comment sections of the survey, the executives laid into Biden and other officials for getting in the industry’s way.

The Fed surveyed 141 oil and gas firms in the 11th Fed District, which includes Texas and parts of New Mexico and Louisiana. The results shed light on the current state of U.S. shale-drilling. Among the most important takeaways is that costs are rising fast for producers and oil service companies as inflation ripples through the raw material and labor markets. The indexes that are used to track the oil and gas labor market were at the highest level in the six years that the Fed has taken the survey, and oil services firms are charging record prices. Services firms are seeing higher costs too, and running short of materials like the sand used in shale drilling.

The big question in the current energy crisis is whether U.S. oil and gas firms will pump more to make up for the global shortfall caused by sanctions against Russia. The U.S. is the largest producer in the world, and theoretically could make up for the Russian shortfall. But companies have been slow to bring back drilling since they stacked many of their rigs during the pandemic to deal with the slowdown in demand. The survey showed that the median producer expects production to grow 6% between the fourth quarter of 2021 and the fourth quarter of 2022—a rate that is not nearly fast enough to add the number of barrels necessary to slow down the rise in oil prices.

For energy investors, slow-and-steady growth could lead to bigger gains. Capital discipline has driven stocks higher after a decade of underperformance. The Energy Select Sector SPDR exchange-traded (ticker: XLE) is up 35% this year.

“The industry is facing serious supply issues for the materials needed to grow production,” wrote one production executive in the comments section.

In addition, the Fed asked producers what price of West Texas Intermediate oil it would take for them to get back into “growth mode.” For 41%, they said they needed prices to be $80 to $99 a barrel, a level that WTI has already surpassed. But the second-most respondents—29%—said the price didn’t matter. That implies that they are sticking to their production plans no matter what, a departure from past oil booms.

Even if other factors are causing slow growth, several executives said in the comments section of the survey that political pressure—from the federal or state government—was hurting the industry.

“In the first quarter of 2021, I divested all properties in the state of Colorado due to the unbelievably hostile and increasingly aggressive regulatory environment driven by anti-fossil-fuel ideology,” said one oil producer. “The administration has no clue about the oil-and-gas industry,” an oil services executive said.

Write to Avi Salzman at avi.salzman@barrons.com