The bear market has mauled your mutual funds, right? The questions that matter most now are how long will this bear market stick around? And what can you do about it?

When it comes to your individual stocks, you’ve already got answers.

You buy, hold, add or sell based on the rules of a time-tested strategy that tells you when to get in and out of individual equities.

Bear Market: How To Survive?

But what about your mutual funds? You can go to cash with mutual funds that you may need to take money out of within three years, says Ric Edelman, a well-known personal finance author, radio host and financial advisor.

Funds that you won’t tap for longer than that are your long-term funds. With those long-term funds, stay fully invested. Don’t convert them to cash, Edelman says.

But now is the time to start allocating a portion of your long-term portfolio to sectors that are positioned to benefit from factors already at work on the market. Two of the key factors you should react to are high inflation — though not as high as recent annualized cost-of-living increases — and higher Federal Reserve short-term interest rates, says Jack Manley, a global market strategist for J.P. Morgan Asset Management.

More about specific investment areas that Manley likes in a moment. But first, let’s take some mental medicine. It won’t taste good. Still, it’ll help you get past your market malaise.

Length Of The Bear Market?

How long will this crummy market last?

At that point, it was the fifth worst bear market of 23 since 1929, according to Sam Stovall, chief market strategist of CFRA Research.

Since that mid-June low, the market has inched upward. But it has not rallied 20%. That’s how much it needs to climb off its bottom to mark the demise of the bear.

If that’s what happens this time, you’ll have to grit your teeth for another six months, until the first days of 2023.

How Long To Recover?

And how long might it take you to recoup your losses?

To simplify this calculation, let’s overlook the possibility of pay raises you might land in coming years. As a result, at your current rate of savings, it will take you five years and eight months to replenish your lost savings.

Some investors think a bear market is no big deal. A 17% loss does not seem like much to them.

The trouble is that now that you’ve lost 17%, it takes more than a 17% rally to restore your losses.

How To Position Your Funds Portfolio

So you’ve got your investment work cut out for you.

Stay fully invested. Why? Because historically mutual fund investors trying to time the market — whether it’s a bear market or a bull — sell too low and buy too high.

If you go to cash, history says you will not get back into stocks and stock funds in time to benefit from the start of the inevitable next rally.

And the price is steep for missing some of those best days of the market.

But look what happened if you tried to get cute by cashing out of your S&P 500 index fund when times got tough, darting in and out of the market. If you missed just the 10 best trading days in that entire decade, your return would be slashed almost in half to merely 5.33%. 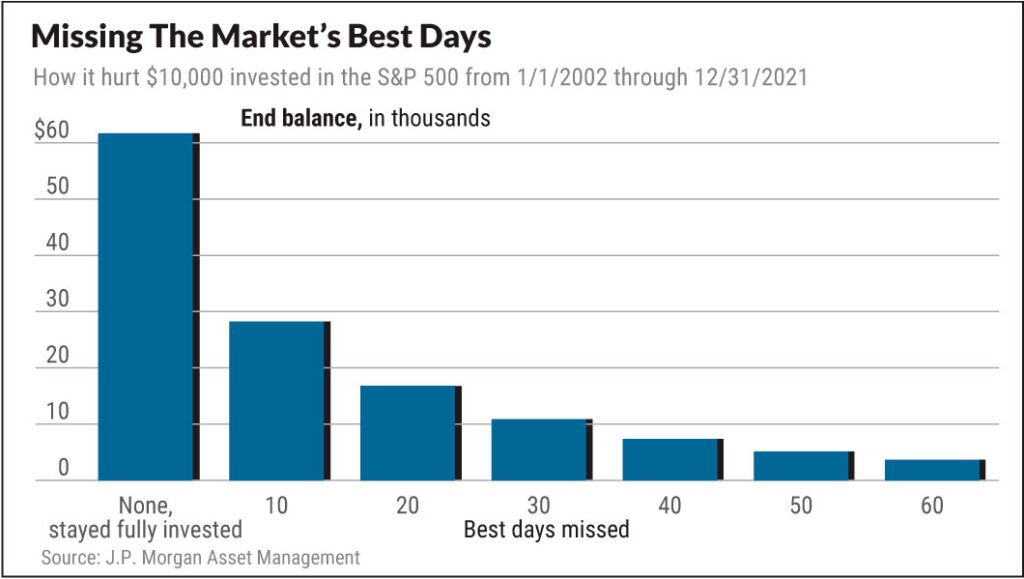 How To Fight A Bear Market

Keep contributing. Investing during a downturn does not amount to throwing good money after bad. It enables you to buy more shares of funds with the same dollars you’ve always invested. That’s because share prices have declined.

And if the market slips more? “You’re insulated from individual declines by dribbling your money in slowly,” Manley said.

“Inflation should cool off,” he said. “But it won’t fall back to the 1% to 2% range that a lot of people got used to. Also, money isn’t free any more. The Federal Reserve is moving to monetary policy normalization.”

Here’s how to invest while waiting for the bear market to end, Manley says.

“When the economy is running on the hotter side, which it is now, look at energy, financials, industrials and materials,” Manley said.

Within financials, check out well-diversified multinational banks. As rates rise, banks make more from lending out deposits. “There’s a lot of profitability in large, diversified financial institutions,” he said.

And remember, what’s poised to work well now, such as energy and financials, is unlikely to outperform technology over the long run, Manley says.

How much you should invest in areas poised to work well now? The bulk of your portfolio should remain in your core, diversified funds. Allocate whatever fraction of your new money into sectors that make sense right now based on your risk tolerance and time horizon.

Follow Paul Katzeff on Twitter at @IBD_PKatzeff for tips about retirement planning and actively managed funds that outperform.

You Need This Much Retirement Savings At Your Age And Income

How Long Will Your $1 Million Last In Retirement?