The not-so-friendly battle for Spirit Airlines has taken another unexpected mid-air turn.

Spirit Airlines said late Wednesday it would delay its shareholder vote on buyout offers from Frontier Airlines and JetBlue until July 8. The company had scheduled a vote for Thursday but will now continue to talk with both parties.

The news is the latest in a fierce campaign to gobble up the low-fare carrier.

In early February, Frontier Airlines offered to buy Spirit for $2.9 billion. JetBlue countered with a higher bid of $3.6 billion in April, which Spirit rebuffed, citing the uncertainty around regulatory approval. Since then, the two bidding airlines have been exchanging unpleasantries and higher offer prices.

In its latest attempt to sweeten its bid, JetBlue raised its reverse breakup fee to $400 million from $350 million. It also proposed paying $2.50 a share in advance compared to its previous offer of $1.50 a share and added a $0.10 per share monthly payment to shareholders beginning in 2023 and lasting until the deal is completed or terminated.

Frontier, meanwhile, lifted its reverse breakup fee to $350 million and increased its upfront offer to $4.13 a share from $2.13 previously.

“Obviously we were surprised in the beginning when we heard from [JetBlue] nearly three months ago with their unsolicited proposal,” Spirit Airlines Ted Christie said on Yahoo Finance Live a few hours before deciding to delay Thursday’s shareholder vote. “Once their position turned hostile with us, the rhetoric has kind of dominated, which in my view appears childish.”

JetBlue shot back at Christie’s take.

Should JetBlue gain Spirit, it would obtain access to a lucrative pipeline of new jets and pilots (among other benefits).

If Frontier and Spirit move forward with the merger, the airline would be the fifth-largest in the United States and gain a stronger hold in the Western market. It would also mark the biggest airline deal since Alaska Airlines combined with Virgin America in 2016. 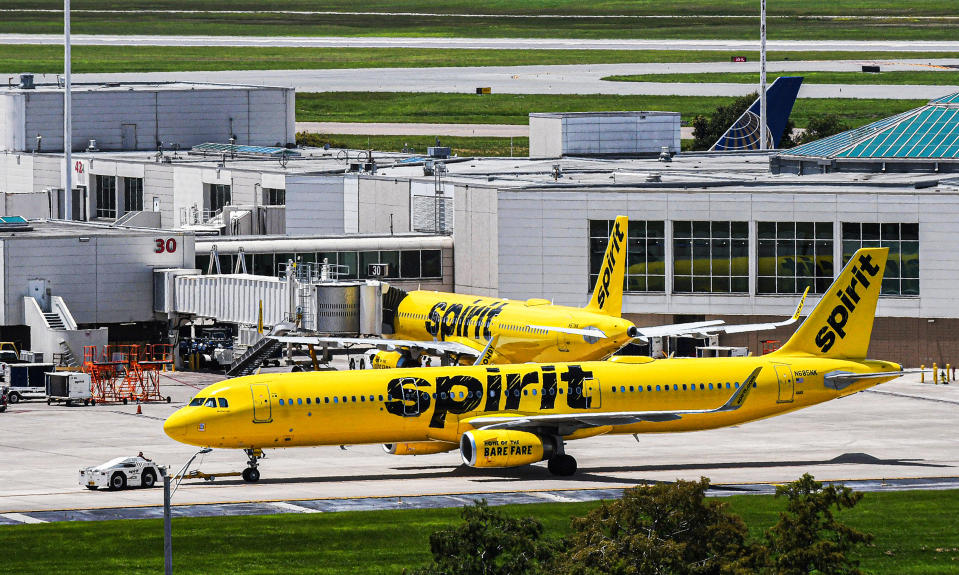 A Spirit Airlines aircraft is towed from the terminal gate at Orlando International Airport on August 6, 2021. (Photo by Paul Hennessy/SOPA Images/LightRocket via Getty Images)

Frontier Airlines CEO Barry Biffle told Yahoo Finance Live earlier this week that Spirit has “a clear choice,” adding that he is looking forward to putting the drama behind the company and getting Spirit’s assets on board.

JetBlue has “done plenty of mischaracterizations and so forth themselves,” Biffle added, noting that Frontier’s offer has received the blessing of influential corporate governance firm Institutional Shareholder Services (ISS). “All I know is that we’re really pleased to see ISS come in and recommend our deal for shareholders.”