Walmart (WMT), the world’s biggest retailer, gave a snapshot on Monday of how inflation is pressuring consumers’ ability to spend on discretionary items.

But there could be relief ahead as retailers look to move bloated inventories, according to a new note by Bank of America (BofA).

“At one extreme, general merchandise stores are overstocked,” the analysts wrote, “but the good news is that excess inventories could put downward pressure on inflation as big box retailers mark down their prices to entice consumers.”

On Monday, Walmart revised its full-year earnings forecast down to -11% to -13% from -1% previously. The news sent shares more than 7% lower as of the market close on Tuesday.

“The increasing levels of food and fuel inflation are affecting how customers spend, and while we’ve made good progress clearing hardline categories, apparel in Walmart U.S. is requiring more markdown dollars,” Walmart CEO Doug McMillon said in a statement. “We’re now anticipating more pressure on general merchandise in the back half [of the year].”

In June, the company said it was working on controlling what it could to reduce inventory through sales and price rollbacks. That same month, John Furner, CEO and president of Walmart U.S., said “there’s probably 20% of [inventory] if you could just wish away and make it disappear, you would.”

Walmart’s rival Target (TGT) is in a similar boat.

After taking a massive sales hit in its May earnings call, Target announced on June 7 that it would be taking steps to downsize inventory through additional markdowns, including some on already heavily discounted clearance rack items. 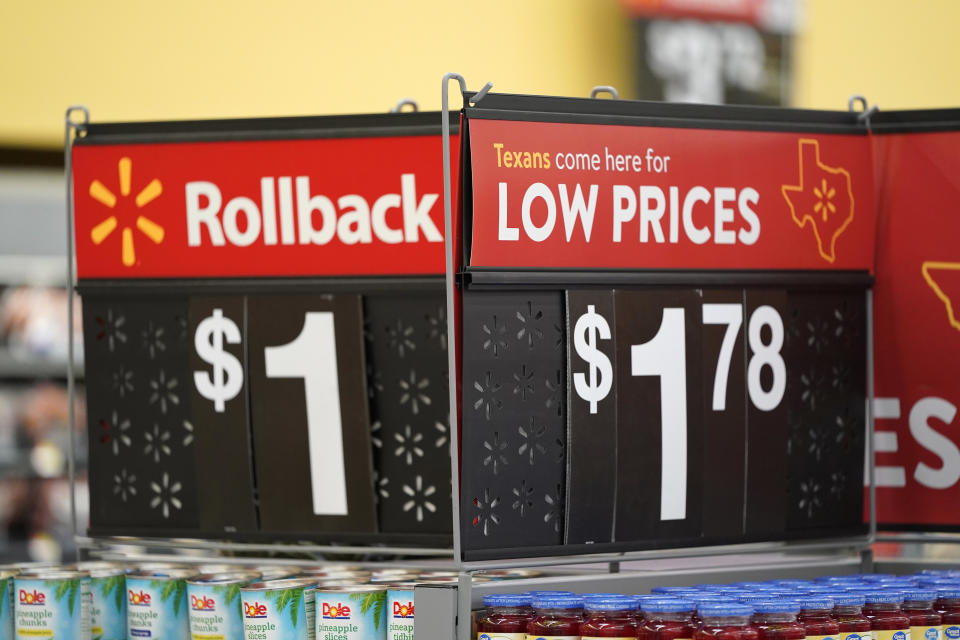 The most recent data from BofA shows that total retail inventories rose to $705 billion in May — the highest amount on record and just 3% lower than pre-pandemic forecasts. However, the analysts stated that the inventory to sales ratio is a better measure of inventories since “nominal levels of inventories can be inflated by higher prices.”

Looking at that measure, they continued, Walmart and Target have a potential overstocking problem. In April and May, the inventory to sales ratio for general merchandise surged above the 2011-2019 average, as the chart below indicates. 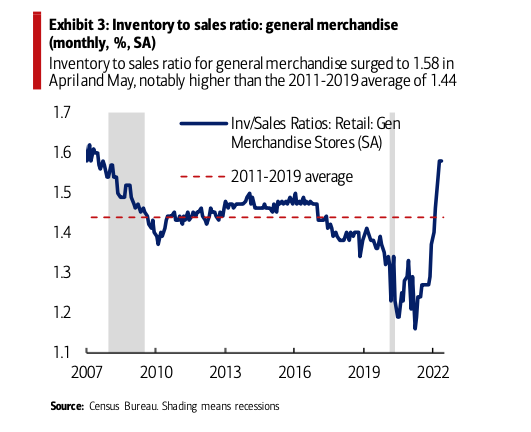 This issue for retailers has been months in the making, according to BofA.

“Big box retailers stocked a large amount of items such as home goods, electronics and big ticket items expecting continued resilience in demand,” the analysts wrote. “However, consumers quickly rotated to services spending this year and high inflation is also keeping some consumers at bay.”

“Second, there is a mismatch between supply and demand in inventories,” they added. “In other words, the inventory in stock isn’t what consumers are trying to buy. Due to supply chain snarls, some inventory arrived too late to sell during the right season, which has prompted various big box retails to announce discounts to decrease unwanted inventories and attract more buyers in general.”