Today’s newsletter is by Brian Cheung, an anchor and reporter covering the Fed, economics, and banking for Yahoo Finance. You can follow him on Twitter @bcheungz.

If you hung out near the White House on Tuesday, you may have seen New Zealand Prime Minister Jacinda Ardern. Or members of international pop music sensation BTS.

You may have also seen Federal Reserve Chairman Jerome Powell, who stopped by for a meeting with President Biden to chat about the administration’s “top economic priority” — inflation.

White House officials and the Fed were mum about the details of the meeting itself, which was closed to the press.

But before the door to the Oval Office closed, Biden said lowering inflation begins with a “simple proposition: respect the Fed.”

Translation: Biden will not force the Fed to raise interest rates at a certain pace or magnitude.

And although Powell is no stranger to the White House — he visited President Trump twice despite the former president’s consistent critiques on Twitter — yesterday’s meeting does signal some level of concern over the economic outlook.

Fed chairs have a history of face-to-face meetings with the president. Fed Chairman Ben Bernanke visited the White House frequently during the 2008 financial crisis and Janet Yellen (now Treasury Secretary) swung by five times during her tenure.

Tuesday’s meeting marked the first time Powell had met with the president since Biden nominated him for a second term as Fed Chair in November 2021.

“What [Biden’s] doing with Powell and the op-ed… is basically getting the message out there: ‘Hey we’re fighting inflation. This isn’t really our fault, et cetera,’” said Steve Sosnick, chief strategist at Interactive Brokers.

The president also in his op-ed said the Fed has the “primary responsibility” to dampen the rapid pace of price increases.

And although blander than the photo op with BTS, the Powell meeting telegraphs Administration’s intention to unite monetary policies (higher rates from the Fed) and fiscal policies (targeted relief from the White House and Congress) in the common goal of lowering inflation. 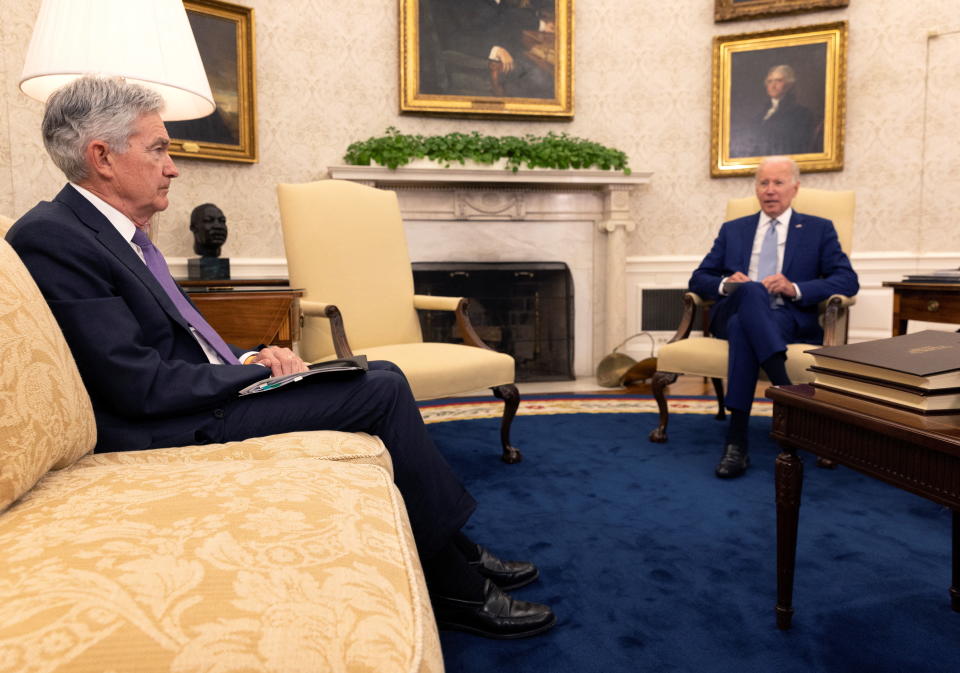 But there have been temptations within previous White Houses to influence the Fed.

Higher rates, which can choke off economic growth, have been a historical thorn in the sides of politicians facing re-election. During the high inflation of the 1980s, then-Fed Chair Paul Volcker dodged efforts from the Reagan administration to coerce the central bank into not raising rates before the 1984 election.

Volcker didn’t raise rates — because the economic conditions didn’t warrant it at the time. But he refused to give Reagan a “yes, sir” to preserve the central bank’s independence.

That protection could prove again critical as the Powell Fed continues the task of lowering inflation.

What to Watch Today