But when Buffett talked about Occidental Petroleum (OXY) at Berkshire Hathaway’s (BRK-A) annual meeting on April 30th, how many really heard what the Oracle of Omaha was saying?

If anyone skipped that part, investors aren’t tuning out now, as Berkshire owns nearly 20% of the company.

Buffett’s investment in Occidental Petroleum is both simple and complicated.

Simple: “What [Occidental CEO] Vicki Hollub was saying made nothing but sense,” Buffett told shareholders earlier this year. “And I decided that it was a good place to put Berkshire’s money.”

Elementary, my dear Buffett. Walking his talk, Buffett has been buying Occidental shares seemingly every day. 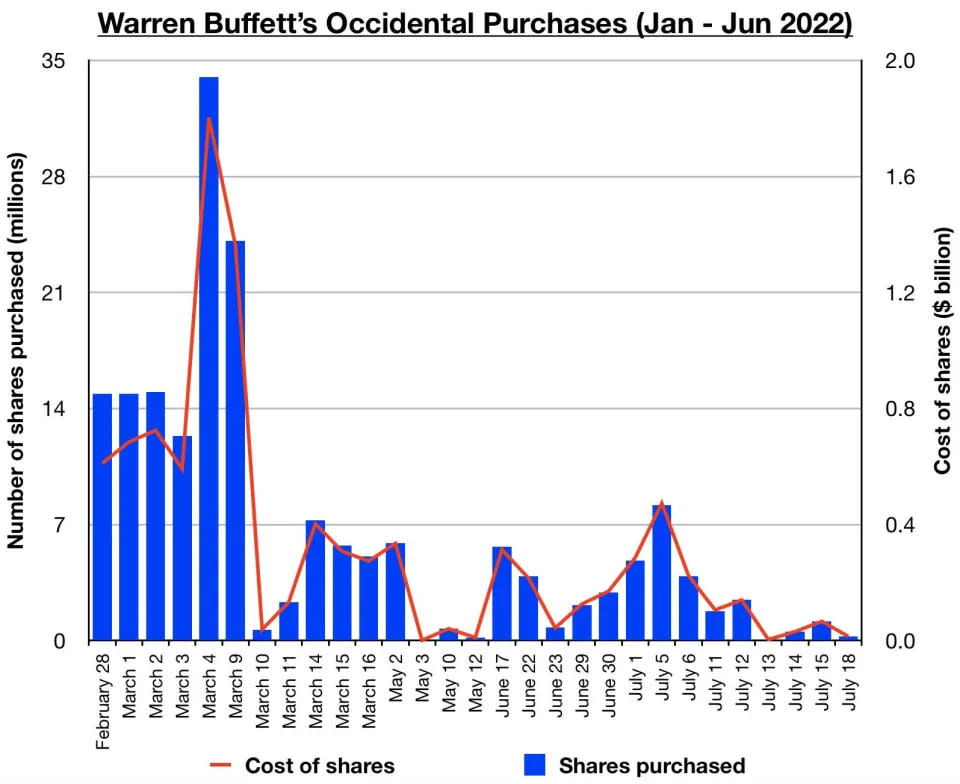 There’s a more complex tale though, with head-spinning backstory that goes back years for Buffett and decades for Occidental.

Oxy Pete, as the company is known, was founded 102 years ago in California. Smaller than the fully-integrated Seven Sisters — BP, Shell, Chevron, Gulf, Texaco, Exxon, and Mobil — Oxy enjoyed an outsized reputation in large part because of the company’s patriarch, Armand Hammer, company CEO from 1957 until 1990.

Colorful does not begin to describe Hammer.

Friends with myriad global leaders, Hammer was called “Lenin’s chosen capitalist,” due to his deep relationship with Russia. Hammer opened up Libya and locked horns with Qaddafi. He tried to buy Church & Dwight, owner of Arm & Hammer baking soda, because the name of that product was almost eponymous. Hammer was a great collector of art, made illegal campaign contributions to Richard Nixon, and actor, Armie Hammer, is his great-grandson. 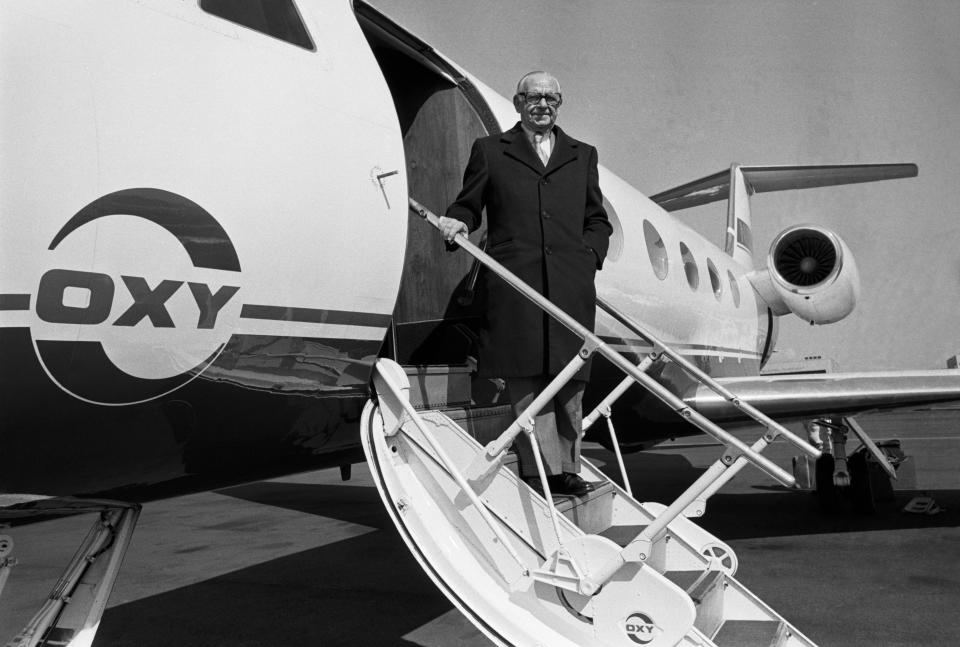 Armand Hammer in France circa 1977. (Photo by Bertrand LAFORET/Gamma-Rapho via Getty Images)

“Occidental made its name in the late 1950s as an international, independent looking for opportunities drilling and producing oil,” says University of Iowa professor Tyler Priest. “Hammer was a huge risk taker not only in doing deals with foreign governments, but in mergers and acquisitions.”

Oxy today, though, is a far cry from what it was during Hammer’s time.

CEO Vicki Hollub is a mineral engineer who worked her way up through the company after coming on board when Oxy bought Cities Service in 1982. Domestic oil and gas production now accounts for 83% of its business and with $29 billion in annual revenue, Oxy is by this count the 43rd largest oil producer in the world and the 11th biggest in the U.S.

Oxy has a significant stake in the Permian basin, in part due to its acquisition of Anadarko in 2019, which is when Buffett entered the picture.

That year, Oxy made a hostile bid for Anadarko, which had already agreed to be bought by Chevron (CVX).

Oxy went on the prowl for funding and the story Buffett told CNBC goes as follows: “I got a call in the middle of the afternoon from Brian Moynihan, the CEO of Bank of America. And he said that they were involved in financing the Occidental deal, and that the Occidental people would like to talk to me.”

Buffett agreed to give Hollub $10 billion in cash in exchange for preferred stock and warrants giving Berkshire a 10% stake in Oxy. Buffett said at the time the bet was essentially a bet on a rising price of oil. A wager that would be interrupted by the pandemic.

After the COVID-19 pandemic swept the globe, crude oil prices crashed. (And famously went negative in the spring of 2020.) Occidental’s stock fell to $10, no doubt paining Buffett.

As part of his preferred stock investment, Buffett was receiving dividends of common stock in Occidental. Which, in the second quarter of 2020, Buffett sold in full.

Buffett’s sale only made matters worse for Hollub, and by the fall of 2020 the stock had dropped below $9. But as the global economy and oil market recovered, so too did Oxy’s stock, which climbed all the way back up to around $40 by early this year. And Buffett’s take on Oxy appeared to shift again.

As Buffett told shareholders at this year’s annual meeting, things changed when Buffett read Oxy’s earnings call for the fourth quarter of 2021 along with its annual report.

“Vicki Hollub was saying what the company had been through, and where it was now, and what they planned to do with the money,” Buffett told shareholders earlier this year. As noted at the start of this piece, these were the comments that made “nothing but sense.”

So Buffett instructed Mark Millard, who executes Buffett’s stock trades at Berkshire Hathaway, to start buying. “And in two weeks,” Buffett said, “he buys 14% out of 60% [of Occidental’s shares that were outstanding.”

This spring and summer, Buffett added to his position and now owns 19.4% of Oxy, just below the 20% threshold that would require Occidental’s results to be consolidated within Berkshire’s quarterly numbers.

According to data from the folks at Business Insider, Buffett’s weighted average cost comes out to around $53 per share. On Friday, Occidental closed at $61.06.

So: What’s Buffett’s endgame? Will he buy all of Oxy? Who knows.

It could be that Buffett, who always appreciates a company with a robust return on equity (ROE), likes the job Hollub has done at Oxy, which returned 16% on its equity last year and is tracking towards 30% this year, according to data from Value Line.

Should you buy Oxy? Again, who knows.

Your take on climate change might inform your decision. Sure Oxy is taking steps to offset carbon, but you don’t buy an ice cream shop if you believe strongly in dieting.

“If you’re negative on carbon based fuels, Oxy is probably not the one,” says market analyst and trader Bob Iaccino, who owns the stock.

As for buying it just because Buffett owns, Iaccino has a take there too.