“While median returns for the S&P 500 have been right around the flatline over the last two years on CPI days, more recent returns have been much weaker,” wrote analysts at Bespoke Investment Group, in a Thursday note. Since Federal Reserve Chair Jerome Powell stopped using the term “transitory” in late November to describe inflation, the S&P 500 has declined on the day of the CPI report four out of six times, including the past four reports.

Over the past six months, the S&P 500’s median performance on CPI days has been a decline of 0.18%, the analysts said.

The consumer-price index is expected to show a large, 0.7% increase when the report is released Friday morning — more than double the gain in the prior month. The increase in inflation over the past year, meanwhile, is forecast to stay near a 40-year high of 8.4%.

The Bespoke analysts looked at sector performance over the past six reports and found that energy, unsurprisingly, has been the best performer on CPI days, with a median gain of 1.1%, while technology was the worst. Of course, 2022’s stock-market fall has been led by tech-related stocks, while energy has soared in response to surging oil prices. 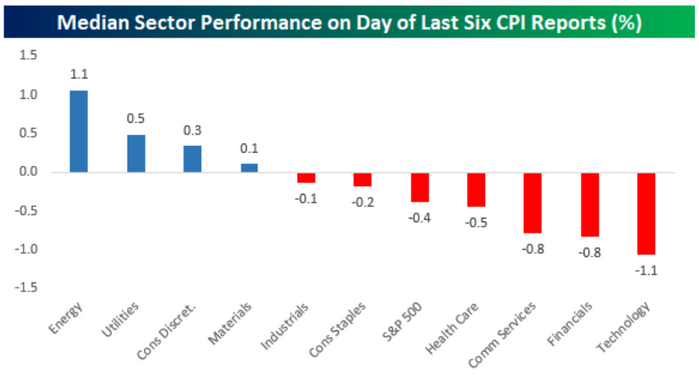 Bespoke noted that for a market concerned about inflation, recent reports haven’t offered investors much comfort. Over the past 24 months, there were just three months where headline CPI came in weaker than expected (6/10/20, 11/12/20, and 9/14/21), they said.

“Ironically enough, on each of those three days, the S&P 500 actually traded lower, although to be fair, all three of these reports were before Powell ditched the term ‘transitory,’” the analysts wrote.