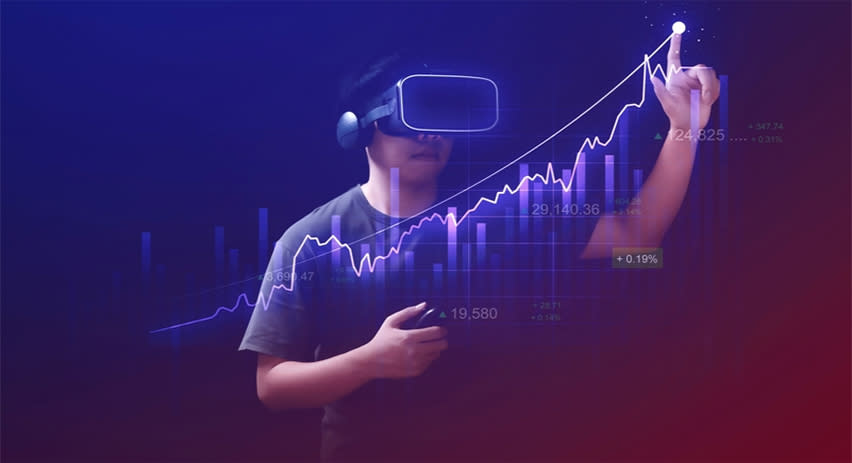 Virtual reality (VR), augmented reality (AR), the metaverse, and all the sorts have been intriguing technological trends that excited many investors last year. Though most of the hype has died down and valuations have contracted, such themes are not going anywhere. In fact, it may be wise to reconsider many of the fallen VR/AR stocks before they have a chance to heat up again.

Understandably, investors have soured on technology stocks, with rates poised to rise quickly. Inflation continues to linger, and a recession could easily curb demand for discretionary goods like mixed-reality headsets and all hardware needed to get into the metaverse.

Further, nobody is really sure when the metaverse will be ready for prime time. Mark Zuckerberg thinks the metaverse represents a multi-billion-dollar opportunity. He may very well be right. However, the timeline is less certain.

In an era of COVID-19 and Monkeypox, which was recently declared a global health emergency, the metaverse as Zuckerberg sees it may be closer than we think, as consumers look to stay in during periods when outbreaks are at a high point. Remote work isn’t going anywhere, and the surge in at-home entertainment may very well be just beginning.

In this piece, we used TipRanks’ Comparison Tool to evaluate three stock giants that could become dominant forces in a metaverse market that could hit $475 billion in 2028.

Nvidia is a hardware innovator that could lay down the foundation for the metaverse. The chipmaker has an incredibly expensive stock due to its front-row seat to many of the hottest tech trends, from AI to the metaverse.

The company’s Omniverse real-time graphics platform is nothing short of exciting. The Omniverse Enterprise platform can help drive a revolution in automation. However, its applications could also help power the metaverses of tomorrow.

Further, the firm’s cutting-edge graphical-processing units (GPUs) will experience a surge in demand once the metaverse is ready for prime time. Nvidia is already a video-gaming powerhouse, with many of today’s popular gaming PCs sporting Nvidia hardware.

On the GPU front, Nvidia is a standout player that could continue to flex its muscles. Though shares are expensive, the magnitude of growth on the horizon could have the potential to be unfathomably high.

Despite the lofty price tag on shares, Nvidia still has the Street’s support; The stock has no fewer than 30 analyst reviews on record, and they break down 25 to 5 (or 5 to 1, if you prefer) in favor of the Buys over Holds, for a Strong Buy analyst consensus view. NVDA is currently priced at $181.63 and its $245.55 average price target indicates room for ~35% share appreciation from that level. (See NVDA stock forecast on TipRanks) 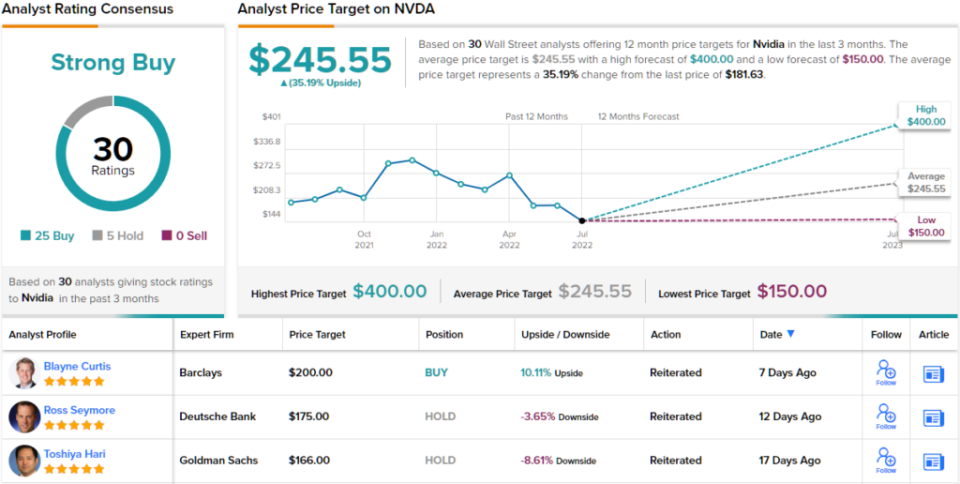 Next up, we have iPhone maker Apple, which has made significant strides in AR in recent years. Though only a select few apps make the most of the latest iPhone’s AR capabilities, we could see a surge in developers leveraging Apple’s powerful AR toolkit once Apple launches a headset.

All eyes are open to Apple’s coming headset, rumored to include the powerful M2 chip and incredibly high-resolution screens. Simply put, the device will be expensive, perhaps pricier than an upscale iPhone.

Accompanying the headset will likely be a cutting-edge operating system (rumored to be called realityOS or rOS). It seems like Apple is using the same playbook (or launchpad) it used when launching the first iPhone. I think Apple’s headset could be a game-changer that gradually erodes the smartphone market.

It’s not just the visual aspect that Apple may have down. Apple’s spatial audio could make the Apple mixed-reality experience that much more immersive. Undeniably, Apple’s a force to be reckoned with in the audio department, with its hot-selling AirPods and Apple Music.

Apple is no stranger to cannibalizing its own products, and it could be ready to do it again in 2023.

Tech stocks tend to attract a lot of attention, especially Apple – the stock has 27 analyst reviews on record, and they include 20 Buys against 6 Holds and a single Sell, to give the company its Moderate Buy consensus rating. The shares have an average price target of $179.89, indicating room for 11% growth from the current price of $162.51. (See AAPL stock forecast on TipRanks) 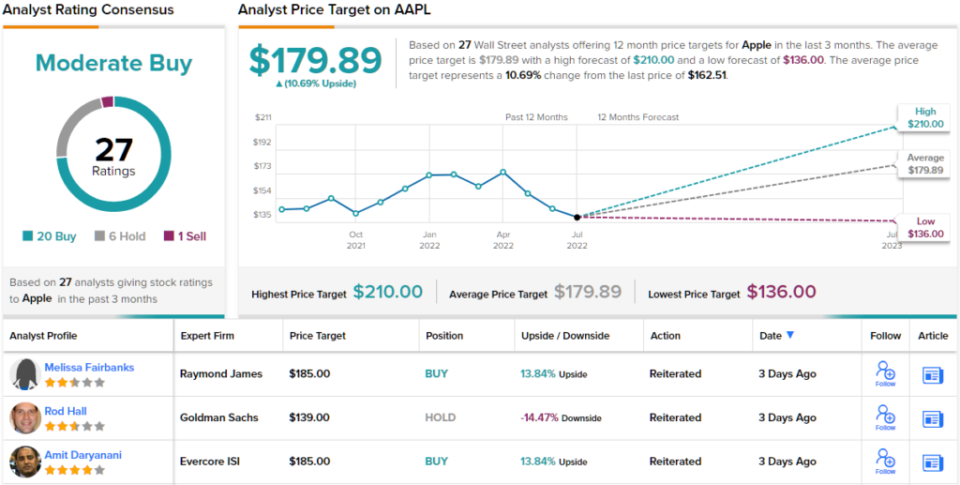 Finally, we have software behemoth Microsoft, which could also make noise in the metaverse. Though Microsoft is best-known for enterprise software, the firm has steadily grown its share in the video-gaming market with its impressive Xbox console, Xbox Game Pass subscription service, and Xbox Cloud Gaming.

Microsoft’s expertise in gaming and the cloud could help smoothen the firm’s transition into the metaverse. Indeed, the metaverse may not be just for play but for work.

On that front, Microsoft’s Teams Mesh product is an intriguing environment that could be the next step up from the conference calls that we’re all too familiar with. A digital office environment would be more engaging and could bring back a lot of the presence lost with the transition to remote work.

Microsoft is a fine pick to play software within the metaverse. Gaming and workplace collaboration will be two of the biggest draws to the metaverse, and it’s hard to find a company that’s excelled in both fields as well as Microsoft.

What does the Street think? With 29 Buy ratings and no Holds or Sells, the message is clear: MSFT is a Strong Buy. The $331 average price target puts the upside potential at ~18%. (See MSFT stock forecast on TipRanks) 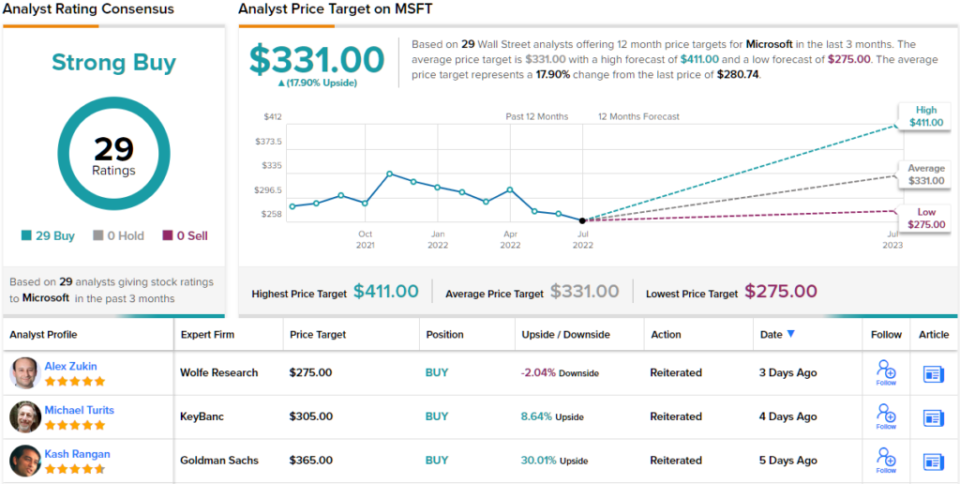 The metaverse will be a game-changing technology, but the transition will not happen overnight. It’s a trend that could accompany sizeable rewards over the next 10-15 years. The three stocks mentioned, I believe, are among the best ways to play the technological shift. Of the three metaverse plays in this piece, Wall Street expects the most from Nvidia over the next year, with around 35% expected returns.