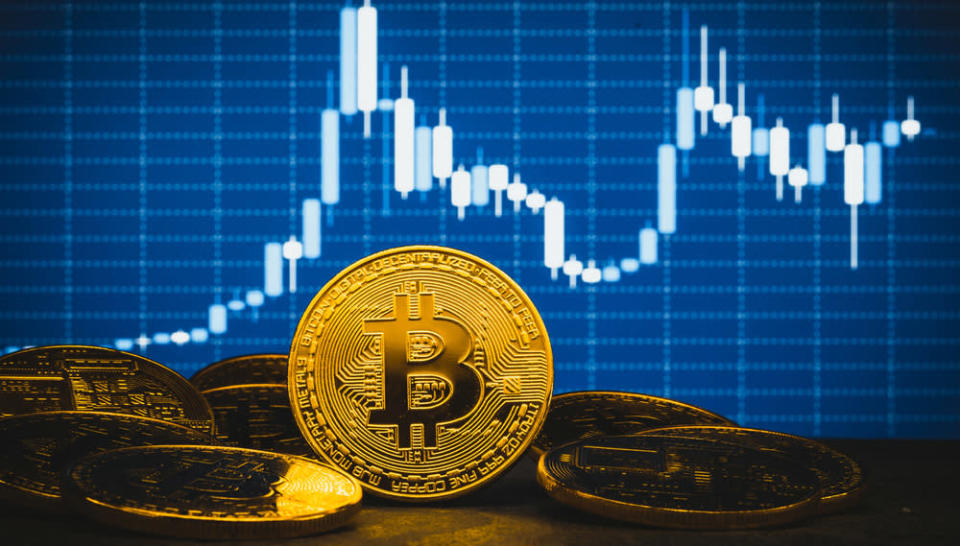 The Federal Reserve raised rates this week, by another 0.75%, toughening up its anti-inflationary stance. At the same time, Fed chair Jerome Powell indicated that the central bank may slow its pace on rate hikes, which gives some hope for a ‘soft landing,’ that may curb inflation while avoiding a deep recession. Markets rallied strongly in response to the Fed news.

The rally has made its way to cryptos, too, which have been tracking US stocks closely this summer. In particular, the largest crypto, Bitcoin, is up 21% this month.

Nexo crypto wallet co-founder Antoni Trenchev sees these developments as net gains, and predicts further near-term rally in BTC in his comments on the Fed meeting: “The conclusion of Wednesday’s Fed meeting opens up a summer window for a Bitcoin relief rally, given we now have two months until policymakers next deliberate on monetary policy.”

So it’s an interesting time to look at bitcoin mining stocks, which are highly correlated to the price of BTC. Using the TipRanks database, we identified two such equities that have received bullish praise from the Street, enough to earn a “Strong Buy” consensus rating. Let’s take a closer look.

The first bitcoin miner we’ll look at it CleanSpark, a company with double-barreled focus – one barrel targeting bitcoin mining and the other aimed at clean energy. CleanSpark produces software products that allow close control of distributed energy systems, microgrids, and other off-the-grid power systems based on ‘green’ energy such as solar, wind, or nuclear. In CleanSpark’s particular case, it uses this technology to power its bitcoin mining operations.

Those bitcoin mining ops are substantial. CleanSpark currently operates four mining facilities, in Texas, Georgia, and New York, and this month announced an expansion of mining capacity totaling 90 petahashes. This expansion was powered by the acquisition of new, ‘latest generation’ mining servers, 1,061 Whatsminer M30S machines, installed a facilities co-operated with Coinmint. In addition, CleanSpark also announced, in June, acquisition of a purchase contract for 1,800 Antminer S19 XP machines, along with water cooling infrastructure, for its mining facilities. These machines, when installed, will add another 252 petahashes per second to CleanSpark’s mining capabilities.

As of the end of June, CleanSpark’s BTC production had totaled 1,863 for the year. June’s production was 339, and production hit a company record-high rate of 12.1 BTC per day. The hashrate increased 12% from May, to a total hashrate of 2.8 EH/s. CleanSpark held a total of 561 BTC as of June 30, after converting 328 to pay for June operations.

Assuming coverage of CLSK for H.C. Wainwright, analyst Mike Colonnese likes what he sees in the company’s prospects for continued growth.

“With a strong track record of solid execution and 600 megawatts (MW) of mining infrastructure already secured (capable of supporting ~20 EH/s), we are confident in CLSK’s future growth and ability to continue to win market share. As a top five miner with 2.8 EH/s of active hashing power, CLSK produced 339 BTC in the month of June (over 11/day). By our calculation, this makes CLSK the most efficient bitcoin miner in the industry (with an active EH/s 1),” Colonnese opined.

“We believe the risk/reward profile for shares of CLSK is very favorable at current levels,” the analyst summed up.

To this end, Colonnese rates CLSK shares a Buy, and his $6 price target implies a one-year potential gain of ~43% for the stock. (To watch Colonnese’s track record, click here)

Overall, this small-cap bitcoin miner holds a Strong Buy consensus rating from the Wall Street analysts, and that rating is unanimous, based on 3 recent positive analyst reviews. The stock is selling for $4.20 and its $11.00 average price target indicates possible gain of ~162% in the year ahead. (See CLSK stock forecast on TipRanks) 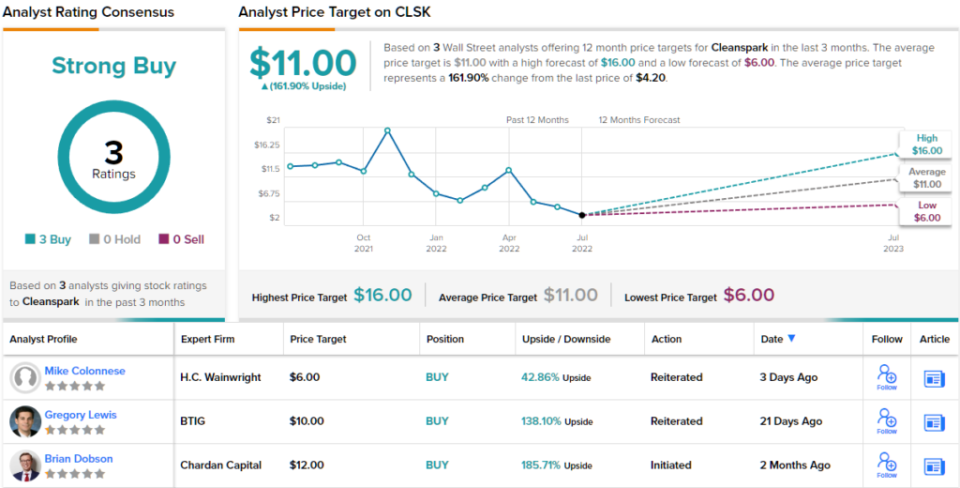 Next up is Argo Blockchain, a crypto mining firm based in London with its operations in North America. Argo has three active crypto mining facilities, one, Helios, located in Dickens County, Texas, and two located in Quebec, at Baie Comeau and Mirabel. The Mirabel facility is the smallest and the Texan location the largest; altogether, Argo boasts some 45 megawatts of power generation supporting 2.2 EH/s of bitcoin mining and 280 MS of equihash ZCash mining.

Last month the company mined a total of 179 bitcoins, and increase of 44% over the May total of 124. The company sold off 637 bitcoin during the month to fund operations. Those operations included the ongoing expansion of the Helios crytpomining facility. Argo entered a contract for delivery and installation of 20,000 mining machines purchased from Bitmain; it is on track to complete this installation by October of this year. As of June 30, Argo held 1,953 bitcoin in its assets.

Despite its solid production, growing exahash rate, and expanding operational footprint, Argo’s share price has been declining since its IPO last fall. The stock started trading on September 23, and closed its first day on the NASDAQ at $16.75; the stock is down 71% since then.

5-star analyst Darren Aftahi, of Roth Capital, has been covering Argo, and in his look at the company’s recent results he sees plenty of reason for longer-term optimism. Aftahi writes, “Helios began mining in early May and should provide a modest lift to 2Q mining capacity and a larger impact in 2H22 as ARBK looks to reach its 5.5 EH/s ending hash rate target… Overall, we remain encouraged that Helios should begin to enable ARBK to increase its network share back towards 1% by year-end and do so with little dilution risk to shareholders.”

Going on from these comments, Aftahi sets a Buy rating on ARBK shares – along with a $11 price target that indicates his confidence in a robust 142% upside for the next 12 months. (To watch Aftahi’s track record, click here)

Argo has piqued the curiosity and attention of 5 Wall Street analysts, who have combined to give the shares a unanimous Strong Buy consensus rating. ARBK is currently trading for $4.84 and has an average price target of $11.40; this gives the stock a one-year upside potential of 135%. (See ARBK stock forecast on TipRanks) 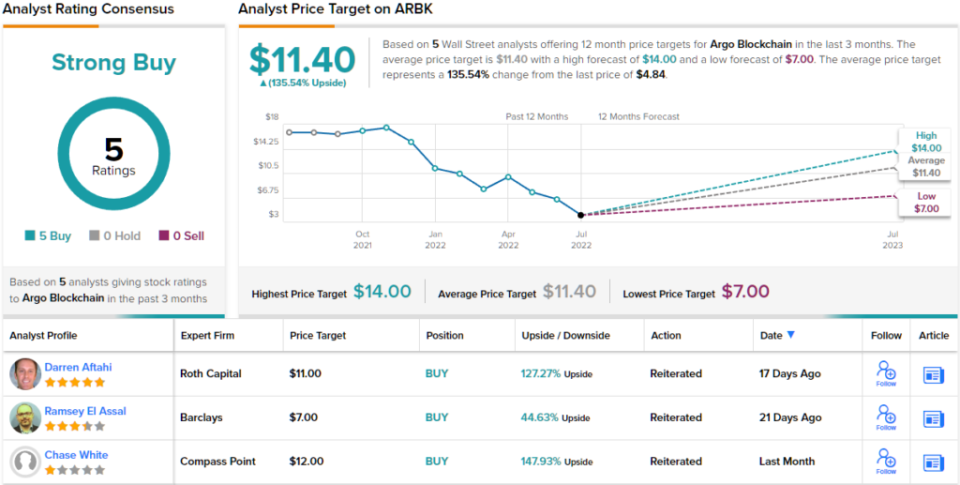