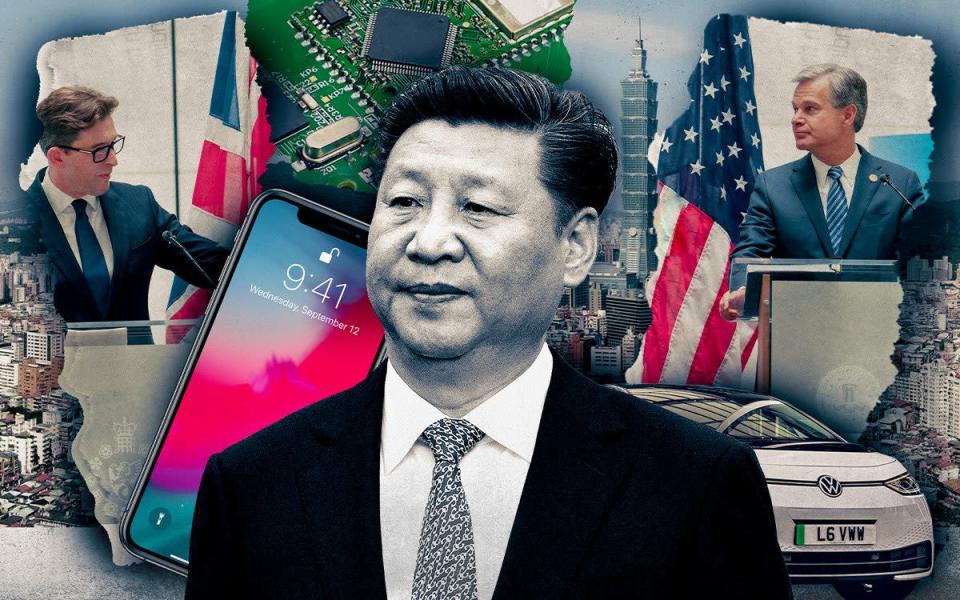 Days after the Ukraine conflict erupted, Apple, BMW, McDonald’s and other Western giants lined up to announce they were quitting Russia in protest.

That it only caused a relatively small financial hit must also have helped. The decision reportedly cost the iPhone maker less than 1pc of its global sales, while some foreign businesses, including France’s Renault, chose to sell off their Russian operations for a symbolic one rouble. Oil giant Shell, which made almost $300bn (£254bn) in sales last year, said its losses would not top $5bn.

Yet experts fear another diplomatic crisis will soon be looming where the calculation will not be so simple: a forced Chinese subjugation of Taiwan.

The independent island state of 23 million people is considered a breakaway province by Beijing, with President Xi Jinping having vowed to bring it under communist control no later than 2050.

Whether attempted with military force or other means, this would pose a nightmare scenario for boardrooms who have spent years – and vast sums – trying to woo the dragon.

Many of the West’s biggest businesses take a huge chunk of their profits from China, dwarfing what was at stake in Russia, and will be far more reluctant to give them up.

Apple made $68bn or 19pc of its revenues in Greater China last year, while one in three German cars are reportedly sold in the mainland. AstraZeneca, the British drugs giant, now relies on China for 16pc or $6bn of its annual sales.

Taiwan itself has also become a lynchpin of global supply chains, particularly in digital technologies, with the island’s foundries producing half of the microchips used in everything from smartphones to washing machines and cars.

It means that a standoff over Taiwan between the West and Beijing threatens far more collateral damage than the confrontation with Russia.

Charles Parton, a former British diplomat, believes this is just one reason why communist apparatchiks in Beijing, taking note of the fierce backlash against Moscow, will not risk a full-blown invasion.

“The interdependencies and the depths of involvement, in both directions, between China and the rest of the world is so much deeper than it is with Russia,” adds Parton.

“There is so much more to lose on all sides.”

Yet he still believes a large amount of “decoupling” between the West and China is inevitable in the years to come, and that future tensions over Taiwan will force businesses to choose sides.

This was the risk recently highlighted by two of Britain and America’s top spy masters, during a joint appearance in London.

In a speech with MI5 chief Ken McCallum earlier this month, FBI director Christopher Wray warned that many Western companies operating in Russia had been left with “their fingers still in that door when it slammed shut”.

“If China does invade Taiwan, we could see the same thing again, at a much larger scale,” Wray told journalists in London.

“Just as in Russia, Western investments built over years could become hostages.”

Dr Michael Reilly, a senior fellow and China expert at the University of Nottingham, who was Britain’s former de facto ambassador to Taiwan from 2005 to 2009, says this was a “warning shot” to firms.

“Most companies that have been doing business in Russia have been able to take the hit, write off their investments and walk out of Russia,” he adds.

“To write off their investments in China would have a much, much bigger impact.”

It is not for nothing that China is known as the workshop of the world, many foreign businesses relying on the factories in the country for part of their production process.

A sprawling complex run by Foxconn in Zhengzhou, dubbed “iPhone city”, employs more than 300,000 people and produces half of the world’s iPhones on behalf of Apple.

Pegatron, a Taiwanese company with operations in Shanghai and nearby Kunshan, separately assembles around one quarter of the handsets.

Apple also relies on a long list of China-based suppliers for components – as do other tech giants such as Microsoft, Google and Intel.

Meanwhile, a host of fashion retailers, including H&M, Zara, Gap and Calvin Klein, rely on a string of material suppliers in the country, which is the largest producer of cotton in the world.

Many Western companies have gone even further and invested in having their own operations in China, or created joint ventures with a domestic company – long a condition for entry into some industries.

Nike has 102 factories in China, employing more than 123,000 workers, while JCB, the British tractors, diggers and other machines, operates a manufacturing plant in Pudong, near Shanghai.

German car makers including BMW, Volkswagen and Mercedes-Benz all have joint ventures that produce and sell millions of cars each year.

VW, by far the biggest and the first foreign manufacturer to set up shop in China four decades ago, sells a car in China every 10 seconds and reportedly relies on the country for around half of its profits. It has 33 Chinese plants spread across the country, employing more than 100,000 workers and producing five million vehicles per year. 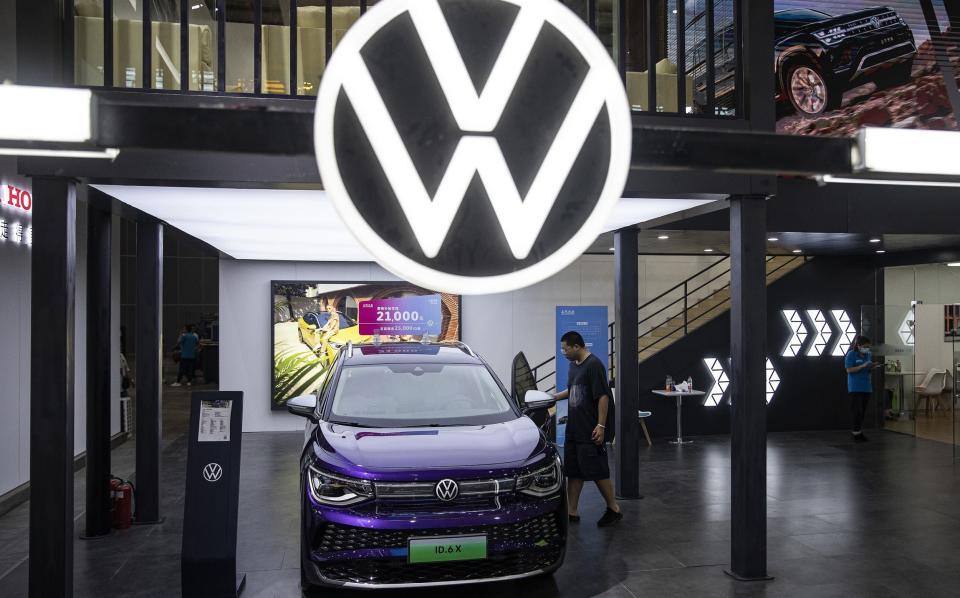 The amount of business German car makers now do in China prompted researchers at the French Institute of International Relations to warn last year that they had become an “Achilles heel” for Berlin. This dependency could reduce the EU’s “room for manoeuvre” during a diplomatic crisis, they warned.

At the same time, trouble between China and Taiwan threatens the global supply of what some now call the “new oil”: microchips.

From humble beginnings in the 1970s, and with state help, Taiwan has turned itself into the chip making capital of the world, with Taiwan Semiconductor Manufacturing Company (TSMC) and United Microelectronics Corporation (UMC) now the two largest such contractors in the world.

Yet markets had a chastening preview of the chaos wrought by disruption to this industry when the Covid pandemic shut down factories on the island, snarling up global supply chains and bringing production lines for vehicles, “smart” fridges, televisions and video game consoles shuddering to a halt.

All this has prompted some companies to begin quietly offshoring some production from China and Taiwan, to countries including Vietnam and Malaysia. They have been hastened by other US-China disputes over the theft of intellectual property, trade imbalances, the crackdown on Hong Kong and the persecution of Uyghur Muslims in the Xinjiang regions.

The University of Nottingham’s Reilly, who at one stage represented defence giant BAE Systems in China after retiring from diplomacy, says this in some ways represents an unwinding of previous decades, when Western governments and companies judged that doing business with China was too good an opportunity to pass up.

“Lots of companies have done very well indeed in China,” he says. “But recent events have concentrated minds and they are looking much more critically now at their exposure.

“There’s not been so much disinvestment, because China remains a very important market for everybody.

“But new investment that might have gone there 10 years ago is increasingly going to other countries now instead. Whereas before they might have invested in China to supply the rest of the world, not a few are now using that investment only to supply the Chinese market.”

Still, the amount of Western capital tied up there remains enormous – and for some companies there is simply too much at stake.

A crisis over Taiwan akin to Ukraine would cause an “existential crisis” for German car makers, an adviser to the firms told the Financial Times earlier this year.

Former diplomat Parton says this will complicate the response taken by the West, particularly if China’s actions cannot be easily categorised.

Instead of invading or blockading the island, he believes Beijing will use “smarter” tactics that blur the lines of acceptability – making it harder to establish whether red lines have been crossed.

“And so there will be foreign companies putting a lot of pressure on their home governments, saying ‘Are you really going to make a stand here, with all the losses it will entail?’,” he adds.

Beijing may also “overplay its hand” and force Western firms to choose sides, perhaps by telling them they must invest in the mainland rather than the island, or demanding that other countries stop recognising Taiwanese passports, restricting the ability of employees to travel.

“If you’re not going to invade, you’ve got to start thinking of other ways of putting pressure on the Taiwanese and the world,” says Parton. “Get ready for it.”