Bed Bath & Beyond has one foot in the grave and may be at risk of being pulled six feet under, one former retail CEO warned.

“Bed Bath & Beyond is in a world of hurt because they have burned an enormous amount of available cash, their business has no forward momentum, and now as we all know they have an enormous leadership gap that they will have to fill,” Mark Cohen, Columbia University professor of retail studies and former long-time CEO of Sears Canada, said on Yahoo Finance Live (video above). “I would not be at all surprised if they teeter-totter into a restructuring sometime in the beginning of 2023.” 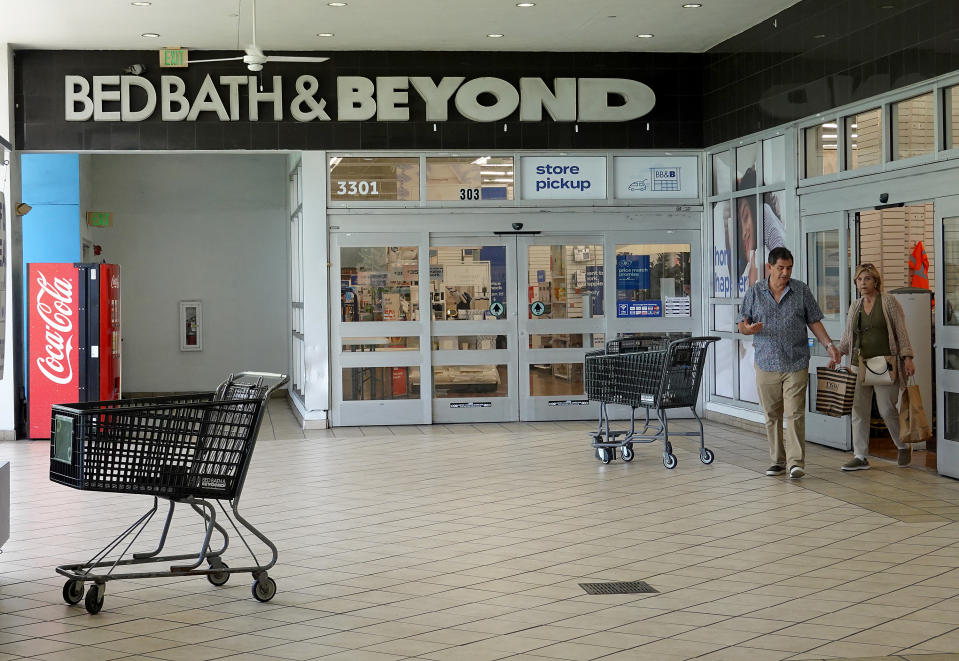 MIAMI, FLORIDA – JUNE 29: A Bed Bath & Beyond store is seen on June 29, 2022 in Miami, Florida. Bed Bath & Beyond Inc. fired its CEO Mark Tritton as shares of the company are down more than 55% this year and nearly 80% over the last 12 months. (Photo by Joe Raedle/Getty Images)

Bed Bath & Beyond qualifies as a true retail disaster story ahead of the holiday shopping season.

In late June, Bed Bath & Beyond announced a quarterly loss of $224 million for its adjusted operating profits. The company ended the quarter with a mere $107 million in cash.

The retailer also said it saw same-store sales crash 27% at its namesake brand in the most recent quarter as shoppers pulled back on discretionary purchases. Shoppers also continued to shun the retailer’s misguided move to scale back on its popular coupons.

Along with the disastrous results, the company fired its well-regarded CEO, Mark Tritton, who had joined Bed Bath & Beyond in 2019 after a successful stint as Target’s chief merchandiser. Board member and retail veteran Sue Gove is now leading the company on an interim basis.

The story is so bad that Wall Street is questioning whether the company survives.

“We are looking at a situation in which this company is probably not going to be around,” Loop Capital analyst Anthony Chukumba said on Yahoo Finance Live. “It’s not going to take years. We could be talking about months at this point. We are in the end days. These results were a dumpster fire, there is no other way to put it.”

Others on Wall Street share the concerns of Cohen and Chukumba.

“Liquidity is now our top concern after the company burned over $500 million in 1Q,” Bank of America Analyst Jason Haas stated in a note titled “BBBY’s liquidity circles the drain.”